Trump, Johnson, Modi and the politics of change 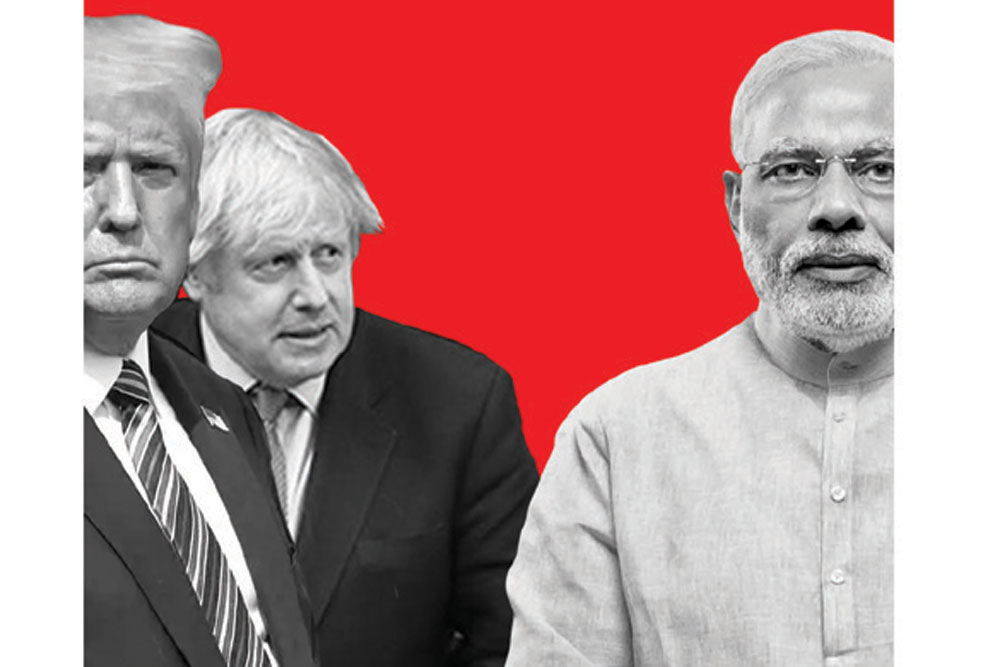 THOSE WHO FEAR the fall of the democratic project find the culprit not in some weird sociology of freedom but in a few men—it’s still men—swayed by the demonic idea of themselves. The number of such end-is-nearists is multiplying in democracies that we thought were too evolved to perish under the whims of the elected leader. The fiends of the moment, and their crimes against norms retold by righteous liberals and revolutionary progressives, are more than textbook strongmen. They are in thrall to their powers and privileges as preordained liberators in a world where the old establishment is rotten; and they truly believe that their war on a consensus-driven liberal order makes them necessary subversives. Or so goes the scariest story of our time as told by the last moralists. They are right and they are wrong. Right because, in three democracies that represent the old and the new and the most varied, the politics of reordering history is helmed by men whose messianism is larger than their electoral mandate. Wrong because bracketing them together as narcissists and populists is to deny them their disparate cultural inheritance. What we see is not just the end of traditions. We see our moral bias against the impulses of democracy itself.

Take the churn in the UK, where tradition is a curse and future is a burden for those who still stand by the verdict of the 2016 referendum. A separation from the EU, with or without a deal, is enforced isolation of an island that has much to gain from the shared destiny of transnationalism, or so think the globalists. Prime Minister Boris Johnson, Britain’s most popular politician, is unlikely to get a deal from the EU. He has such faith in the power of being Boris Johnson, a Churchillian self-portrait with a different war as backdrop, that what matters to him in the end is the nationalisation of Englishness without falling into the closed culture of anti-Europeanism. Add the reality of a worsening pandemic to the inevitability of a rude exit from the EU and what Britain gets is a scenario where its national misfortune has only one name: Boris Johnson. Suddenly, the institutions of democracy are overshadowed by the mythology of the leader as an agent of history. Democracy’s curse, we are made to believe, is its biggest winner.

Across the Atlantic, too, the winner is the curse, and, unlike his English counterpart, Donald Trump is too immersed in the news cycle to borrow from history. No intellectual showmanship with Latin-laced one-liners for him; history for him is a collection of exclamatory tweets. America’s misfortune—spiralling pandemic toll, collapsing economy after a three-year higher performance, and anti-racial eruption after the death of George Floyd—too has been reduced to his size. It’s an individual crime, and the President’s personal aesthetics, or lack thereof, has made it a crime against good taste as well. The new Atlantic cover has the perfect counterpoint to MAGA: ‘Making America Again’. America is in ruins, for one man’s self-obsession has made everything else, from facts to racial justice, negotiable, or even disposable. Here again, the easy availability of evil has turned arguments into familiar declarations of solidarity of the offended. And it’s the politics of offence that the President uses to control the base, subjugate the Republican Party, and to keep his critics transfixed. There could be no bigger me-alone moment in a democracy. The Jacobins have got a kitschy king to fight against in America’s most intense ideological war. “We are the change that we seek,” said Trump’s predecessor who was supposed to be the post-racial president of America. And look where they are.

Or look here to see how gradualism works. If it was personal recklessness that denied the politics of change moral credibility on both sides of the Atlantic, here in India, democracy at its most varied and volatile, power has not diminished the idyll breaker. Modi has bucked the trend, even though his faith in himself as the sole nation builder has not wavered. Restraint can’t be a revolutionary’s credo, but it can certainly make even the most epochal changes culturally and constitutionally smoother. That is what Modi has achieved, and in so doing, he has not alienated his base. He has strengthened it without following its playbook. In the other two democracies with scene-stealing leadership, the sum of all national ills equals the follies of a Johnson or a Trump. As India goes up in the ranks of infected nations, we don’t have a hastily identified political villain. That’s because Modi did not resort to denial or bravado; he played the realist, a more believable role for a leader in the face a global health crisis. And whenever there was the ideological fulfilment of the mandate, it was the Constitution, not the street, that he turned to for legitimacy. Consolidation with restraint is not what passersby practise in politics. It is what those who are here for the long haul do.

You lose faith in democracy only when its fine instincts are suppressed by fly-by-night liberators.