This is a film worth watching 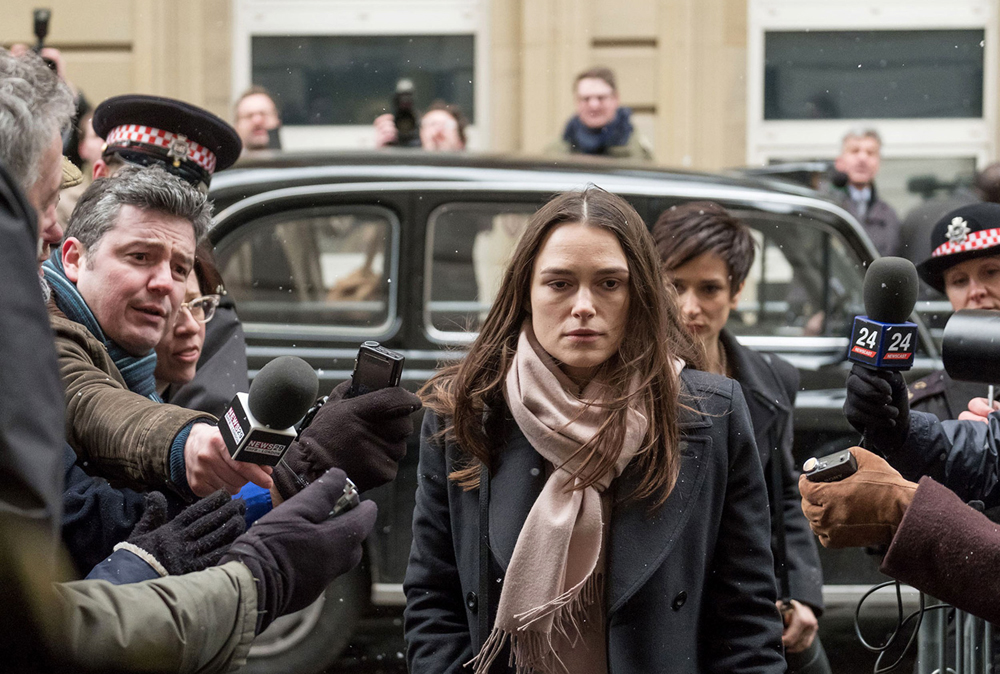 This movie tells us the nuts and bolts of the Katharine Gun story, and tells it darkly. In the most dramatic scene, when Ms. Gun enters the courtroom to be tried for breaking the ‘Official Secrets Act’, she walks up the stairs from what looks like a dungeon, to a crowded court; emerging from one concentric circle of hell in Dante’s ‘Inferno’, to another.
The film is about a woman’s courage of conviction that war in the 21st Century is the most insane and dysfunctional method to solve international disputes. It is about her readiness to ‘betray’ her own country to leak a memo she had access to, shortly before the Iraq War of 2003; a document that could possibly have prevented that war, but didn’t.
The ordeal of Katharine Gun (Keira Knightly) is told with little drama, and with nice British understatement. She had leaked the document while working as a translator for GCHQ, one of the sections of British Intelligence, and about a month later it was published on the front page of ’The Observer’. The film is quite humourless, except for one unintentionally funny scene.
To his chagrin, the reporter who broke the story when he received the leak, Martin Bright (Matt Smith), was accused of writing a fake story, because the spellings in the reproduction of the American origin memo were British – ‘favourable’ instead of ‘favorable’, and ‘recognise’ instead of ‘recognize’. They accused him of cooking it up in England. The furious Editor yells at his newsroom, and demands to know which idiot tampered with the spelling of the original. The youngest journalist in the room, Nicole Mowbray (Hanako Footman), puts her hand up, starts crying, and confesses that she inadvertently sent the story through British spell-check.
Humo(u)r is not the only thing that is dry in this film. All the actors in ‘Official Secrets’, particularly the interrogators of Katharine Gun, talk just like George Smiley from ‘Tinker Tailor Soldier Spy’; spectacles on nose, leaning back to contemplate a world of lies, ice clinking ominously in a glass of Scotch, the clanking of a typewriter in the background. That keyboard is here replaced with the soft touch of the computer, but the ambience is just as sinister.
The acting is top notch. Kiera Knightly plays her role with gravitas. She is nervous as Katharine, but defiant and articulate under duress. Particularly good are the scenes when the Foreign Office decides to deport her Kurdish Iraqi husband, in petty revenge for the leak. Her brave mask drops then, to show a woman desperate, almost hysterical, pulling out all the stops to save the man she loves from being sent back to the country he escaped from.
The person defending Katharine is Ben Emmerson (Ralph Fiennes), a Barrister specialising in Human Rights and Humanitarian Law. Fiennes uses facial and head movements in short and memorable scenes. The most memorable is when a shadow of a smile flits across his troubled face when he is pleased with, and admires, Katharine’s response to a question he has posed.
‘Official secrets’ is a depressing movie about lying governments, an embedded media that reports half truths without stating which half is the truth, and an outmoded executive and legislative system that prioritises devotion to the nation above devotion to the people of that nation. Yet, for the lessons on post modern political systems it teaches us, and for the skill of the actors who demonstrate them, this is a film worth watching.