The movie is disappointing 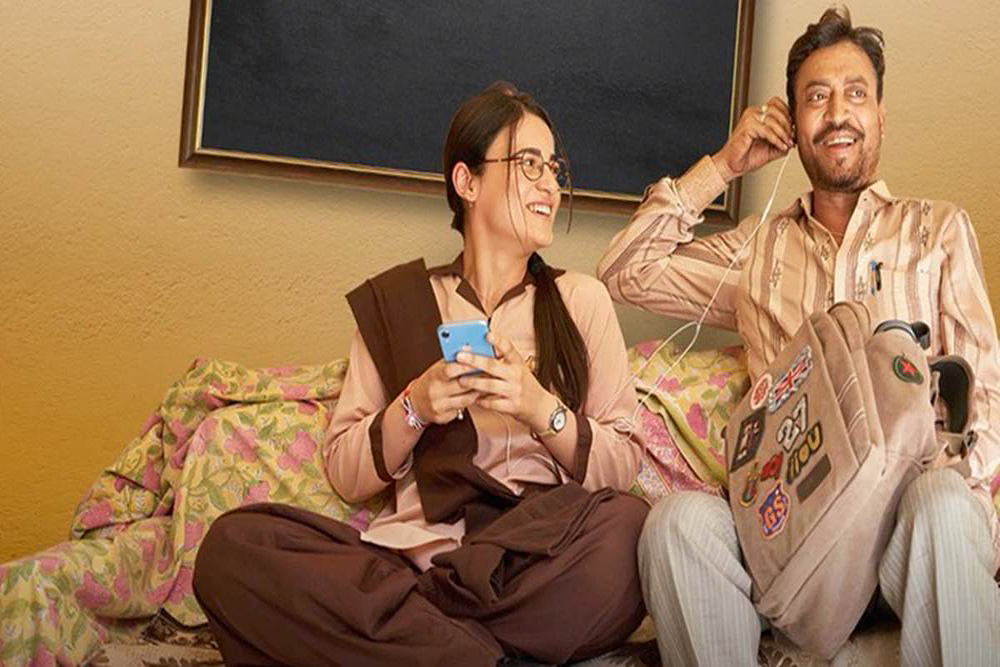 There seems to be a problem with the cultural perspective in ‘Angrezi Medium’. It doesn’t ring true here, as it did in ‘Hindi Medium’. There, the comedy was essentially about a family pretending to be poor, so that they could admit their daughter into a prestigious English Medium school, via a ‘Right to Education’ quota. Most of the laughs in that film came through the middle class family’s desperation to appear poor. The hypocrisy in this pretense, and the willingness to deceive for it, was an amusing take on the aspirations of the upwardly mobile

Likewise, here, in ‘Angrezi Medium’, language is closely connected to culture and economics at the start, but the theme shifts quickly to an entirely different emphasis, the father-daughter relationship. It tells of how difficult it is for a single father who dotes on his child, to let go of her when she is an adult with a mind of her own. This is a frequent subject in Hindi films, particularly in those set abroad, and, frankly, the stories of kids placed in foreign cultures who stop listening to their parents and lose contact with their roots, has been done to death.

Moreover, Director Homi Adajania, whose filmography includes the excellent, though somewhat quixotic films, ‘Being Cyrus’, ‘Cocktail’ and ‘Finding Fanny’ may be ill fitted, in style and temperament, to the mode of conventional Hindi melodrama. The movie begins in Udaipur with the story of Champak (Irrfan Khan), a ‘Halwai’ who tries to fulfill his daughter’s dream of studying at a British University. Champak has neither the money or the contacts to get Tarika (Radhika Madan) into College, so he gets some help from his brother (Deepak Dobriyal), his friends, and a long separated and suspiciously anglicized Udaipur resident (Ranvir Shorey), now living in London.

The conversations in the movie are long drawn and the humour is not crisp and sharp. It is more of an entertainment based approach to scenarios than an ironic one. It looks at traditional Udaipur residents unable to figure out idiomatic English, and laughs at them. But it stretches the point. For example, when Champak and his brother go through immigration at Heathrow Airport they declare that they have come to the UK to do business in drugs. What they mean is medicine. But the scene of them explaining that they want English people to do drugs to make them feel better, is stretched out, and the joke is a bit elitist.

Far better is a cameo by the inimitable Pankaj Tripathi. Having been deported on the first flight back to New Delhi and their visas cancelled, our leading men are put on a flight to Dubai. They are asked to meet a fixer called Tony (Tripathi). First, Tony gives them ‘Gyan’ on the science of illegal immigration. Then he suggests alternative ways to London, like the sea route taken by Syrian refugees. Visions of being shot dead on a boat come to Champak, and he refuses, saying that as residents of Rajasthan they would prefer a land route to England, riding through the desert. Tony then pulls out a map of England and explains that it is an island, and that you cannot cross the English Channel on a camel. Tripathi’s deadpan expression as he painstakingly explains all this, has you in splits

There are enjoyable scenes in ‘Angrezi Medium’, but the movie lapses too often into hopeless sentimentality. The father-daughter bonding and separation subject is not well handled. The two actors cannot carry it off convincingly. Radhika Madan as the teenage daughter is not well cast. She does not resemble her father in any way. And Irrfan, in turn, appears awkward in his filial demonstrations.

To underline the parent-child estrangement theme, the film introduces an extraneous sub-plot between a Mother (Dimple Kapadia) and her police officer daughter (Kareena Kapoor Khan) in London. Uncannily, they do look very much like Mom and daughter, and their growing apart scenes are well acted, particularly by Dimple, but their relationship is too obviously placed as a parallel track to what could go wrong between Champak and Tarika. Also, revealing a sub-plot at such a strategic place in the script, appears forced.

‘Angrezi Medium’ has fitful story telling technique. It has a few short and funny scenes, interrupted by long and meandering conversations that do not appear to lead anywhere. This lack of overall balance in the narrative, affects your viewing concentration, and you cannot put your finger on the genre on display. Is it comedy, family drama, or both? As a spin off on ‘Hindi Medium’, the movie is disappointing.