In his first solo show in six years, Sanjay Bhattacharyya reimagines the idea of shrines 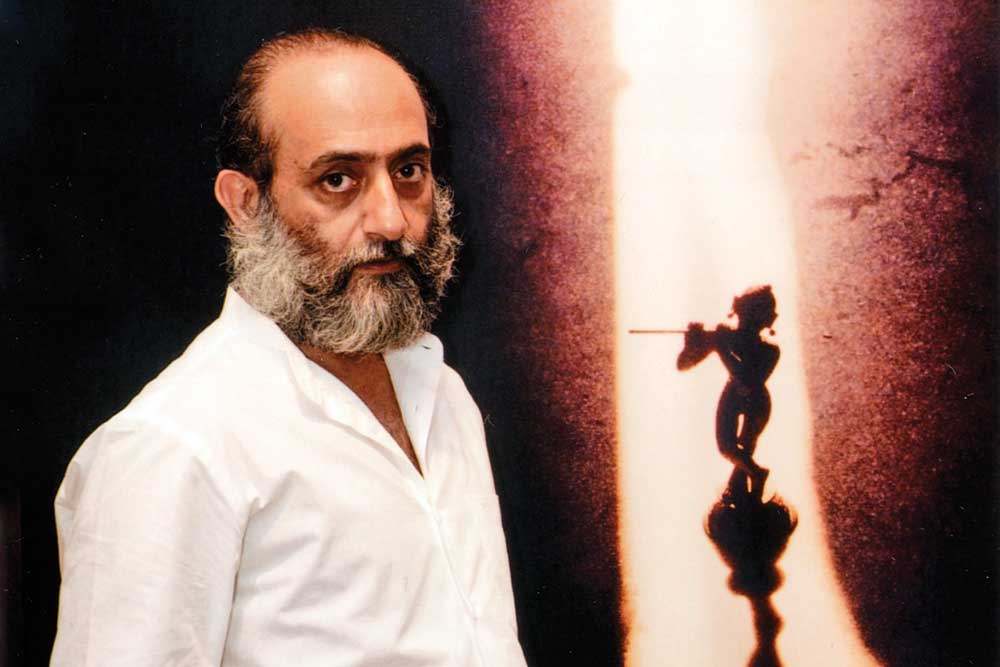 ONE OF THE most enduring images in public memory of Sanjay Bhattacharyya dates back to 2006, when the artist brandished a print of a fake painting of his guru Bikash Bhattacharjee that was being sold as an original by an auction house. Behind the artist, a poster read, ‘Artists Combined Movement Against Fake & Forged Art’ with caricatures of certain grandees who apparently wanted to strike gold through illegal sales. It was actually a press conference, and others on the dais included artist Krishen Khanna and critic Suneet Chopra. Bhattacharyya looked boyishly innocent, despite his characteristic beard and defiance.

He looks more seasoned today, but is still warm and courteous, more than a decade after his dramatic revelation that was taken as blasphemy in the incestuous world of art, an assault on the secretive culture of transactions in this business. Bhattacharyya had to go through a tough time. It scarred him, but he got by with the support of well-wishers.

At 60, Bhattacharyya looks as youthful as ever, with a flourishing, not-so-gentle, full Tagore-like beard. For a man who has evolved from the realism of the Bengal School and watercolour works to oil paintings and to a nuanced outlook on life and art, he speaks with the conviction that comes from long silences and meditative contemplations over numerous themes and frames.

He continues to give importance to the most subtle details of objects that inspire his art. But not in the way you expect him to. His first solo show in six years, titled Shrines —the fruit of months- long trips to select temple towns in the country—proves just that. Each large oil- on-canvas offers a panoramic view of the images he handpicked for painting from among the hundreds of photographs he had taken on visits to various religious hubs. They are the Venkateswara Temple in Tirumala; Kamakhya Temple on the Nilachal Hill in Assam; Kalighat Kali Temple in Kolkata; and the Golden Temple in Amritsar. He also visited Bodh Gaya in Bihar and has captured its vicissitudes in three of his drawings on display at this exhibition. The others are huge paintings of mostly larger-than-life visuals that attracted Bhattacharyya’s attention during his stay at these locations.

He has used certain new colours that are rarely found in his works: Prussian blue and vermillion orange chrome, which add to the splendour of the works. But they aren’t random selections at all, insists Bhattacharyya.

Even the size given to each visual was painstakingly considered. Take for instance the Venkateswara Temple: the image of the temple is there on the canvas, but as prominent as the imposing structure in white is the tall ceremonial lamp with a trishul on top in contrasting black. The other choices include a Hanuman (a recurring motif in Bhattacharyya’s works); a bare-chested man with a musical instrument; a carved statue of a woman with a large bosom; and an embellished image of an animal head, possibly that of a bull. Yes, his most commonly used colours—browns and deeper tones of rust and burnt sienna— are present too, and appreciators of his art are held just as firmly in their thrall.

“I had the freedom to do what I wanted to choose and I love the experience of travelling and exploring these places for work,” says Bhattacharyya, sitting back in his New Rajinder Nagar studio in Delhi, dressed in a stylish Bangladeshi lungi and casual shirt with shoulder straps that appear to be waiting for epaulettes.

Bhattacharyya avers that when it comes to work, he often employs a large measure of rigour although he tries his best to live up to his mentor Bikash Bhattacharjee’s crucial tip for young artists of his generation: ‘Just play.’

Accomplished as Bhattacharyya is, his latest show leaves one wondering if his experiments with the new colours and themes have to do with how art reflects life. The Bhattacharyya who emerges from these painting is the deeply observant traveller who imbibes the spirit of every place he visits.

If you take a close look at his large painting from Amritsar, for instance, it is not just the spiritual centre of Harmandir Sahib—the sanctum sanctorum that houses the Guru Granth Sahib—within the Golden Temple that has his attention. What the artist takes into his artistic sweep is broader. Even so, the Akal Takht, the seat of authority at the complex which was once sanctuary for the likes of the slain militant Jarnail Singh Bhindranwale, doesn’t find space in his work.

The artist’s impressions include the fish inside the pond of the temple complex, a traditionally armed guard; a pious pilgrim, and a remarkable Khanda, the awe-inspiring symbol of the Sikh faith which is a combination of multiple emblems associated with the religion.

The artist would rather focus on what he sees around a temple and he uses realistic images to offer insights on what he thinks of such dwelling places of the gods. Kali, Krishna, Hanuman and other mythological beings have routinely found place in Bhattacharyya’s artistic toolkit. This time, however, he depicts not the portraits of these deities or their sanctum sanctorums, but pitches them as part of their surroundings along with other fixtures. His use of colour from both the Kamakhya and Kalighat temples highlights his mastery over his own inimitable style. The resplendent sadhu, temple bell, figures and flags quintessential to the temple; a white pigeon with its dark shadow; garlands; tridents, Kali herself and other images that populate his huge Kalighat painting are a visual treat. In the case of Kamakhya, he goes a step ahead. Bhattacharyya captures the whole temple complex like an intellectual invader, only to peek beyond the bricks and walls that tend to shape our ideas about religion.

His practice is mostly old school, not keen to employ much technology. The Delhi-based art critic Uma Nair, who has curated his shows earlier, says, “Sanjay does not use digital help. He paints directly on the canvas. With realism, he mixes surreal elements, like in his Kamakhya painting.”

Bhattacharyya, who quotes Bikash Bhattacharjee liberally in a long chat, says that he is busy with several new projects, including a few abroad in places like Muscat and London, and he is glad that his portraits of politicians still evoke interest. But he is happiest when he gets an opportunity to make art the way children play, with no sense of foreboding. He is also working on a quirky interpretation of selfies.