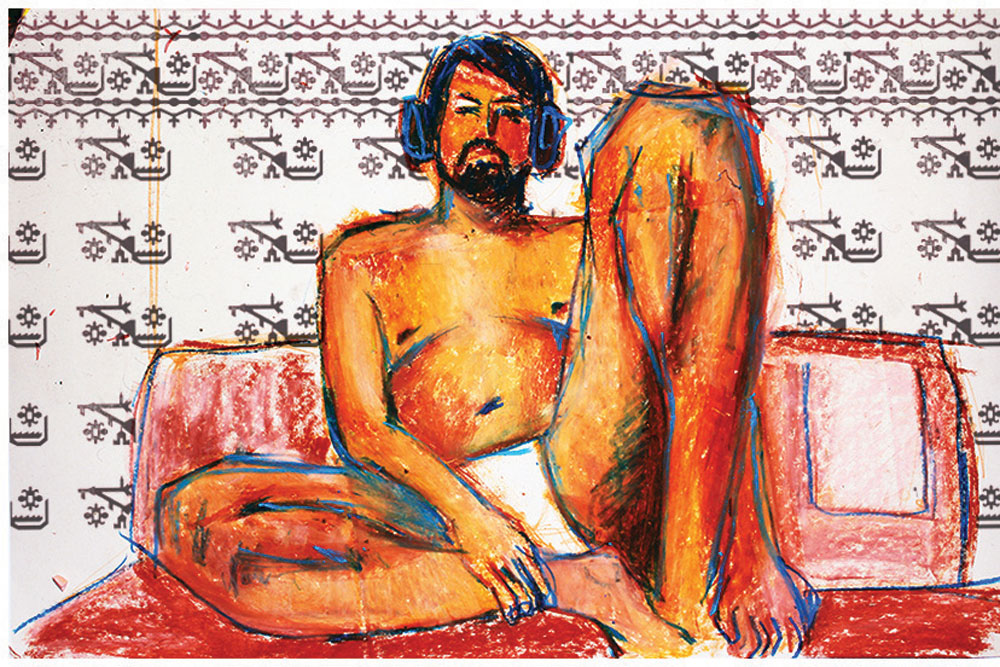 Sitting on the sofa


RUHUL ABDIN, 34, IS an artist and urban researcher based in Dhaka. He runs a design research studio Paraa, which focuses on the role of architecture and urban planning in the lives of marginalised communities. During the pandemic, as work began to slow down, and Abdin realised that it would be difficult to fly back to the UK, where his boyfriend lives, he started working on a series of nude portraits to channelise his frustration. Available on Instagram at @ruhul.abdin, they feature Bangladeshi men who identify as either gay or queer.

The models were invited to participate using Grindr, a common mobile app among the demographic Abdin was interested in. He was glad to see “a genuine boldness among people from Dhaka, Chittagong, Sylhet and a host of small towns”. He says, “There was a willingness to be naked and to talk freely about their sexual kinks. Some were fascinated by the idea of being drawn by an artist, others were quite specific about what they wanted to show and highlight. One of them curated a whole look with costume and jewellery.”

Abdin has made nude portraits in the past but things felt different this time due to social distancing. He was drawing people on video calls, not in a studio or living room. The fluctuations in internet connectivity made it difficult for him to direct them to pose, especially because they were not professional models. Having grown accustomed to the physicality and intimacy of live drawing, he was worried whether his new experiment would work. It did despite the challenges, and his collection of nude portraits continues to grow.


The drawing sessions have enriched his understanding of the Bangladeshi queer community through conversations about love, monogamy, polyamory, family and responsibility. “Many of [my models] live with their families, so finding the time and space was a task but they were far more open and confident than the upper-class socialites I approached for the project,” he says. He looks at these interactions as longer collaborations, particularly in cases where trust and friendship have been established over time. 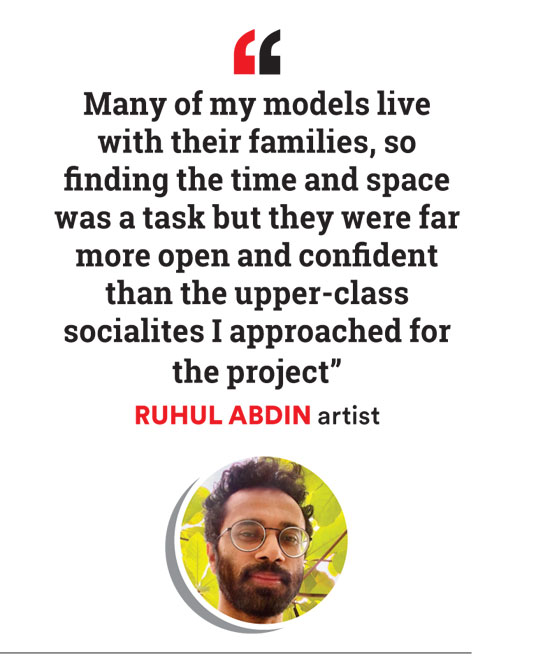 This art project has helped Abdin reflect on his own identity as a Bangladeshi gay man who grew up in the UK and has a British passport. He says, “I have been attacked in the streets. The windows of our house have been smashed. Growing up in white majority towns, I saw a lot of anti-Muslim and anti-South Asian sentiments. These things stick like glue.” As an adult, he has felt objectified and fetishised in white gay spaces, and this has pushed him to get more involved with queer collectives Oitij-jo and Odbhut that promote Bangladeshi art and culture in the UK.

Living in Dhaka is a different ballgame. On the one hand, he enjoys a privileged position due to his British citizenship, so he is using it to celebrate a range of body types and also question the fixation with fair skin. On the other hand, he is all too aware about the threat of homophobic attacks, digital surveillance and extra-judicial killings. Several journalists have ‘disappeared’ in recent years, queer activists have been killed, and critics of the state as well as of Islam have been silenced. It is in this context that his work must be viewed and applauded.

How different is the situation in Pakistan? On September 1st, the Pakistan Telecommunication Agency issued a press release announcing that it had blocked access to five dating and live streaming applications ‘keeping in view the negative effects of immoral/indecent conten’. Grindr, which is used by gay, bisexual, trans and queer people in Pakistan, for social networking as well as casual sex, also made it to this list. While the impact of this ban is yet to be measured, Instagram is another avenue for interested parties to connect.

Jalebi, 27, is a computer engineer and data scientist living in Karachi who does not reveal his real name online because that might compromise his privacy and put his life at risk. His sexual orientation is known only to a select few, and he wants to keep it that way for now. He runs the Instagram account @artqueerjalebi, featuring digital illustrations of queer men in Pakistan, sharing moments of intimacy. He made these images primarily “to kill time during the lockdown” because he had “nowhere to go and nothing to do”.

After Jalebi shared his work with some friends in private, and on WhatsApp groups, he received a flood of encouragement. This emboldened him to share the illustrations on Twitter and Instagram. There has been no looking back since then. He says, “The project is called ‘Art Queer Jalebi’ because jalebis are not straight, and they are ‘meetha’—a term often used to ridicule gay men. I wanted to turn the slur into something celebratory.”

He was born and raised in the interiors of the Sindh province in Pakistan against the backdrop of riots between Mohajirs and Sindhis. When he grew older, he moved to Karachi to fulfil his dreams. Jalebi was stunned by the contradictions he saw and gradually began to rejoice in them. He says, “We have localities where people will disapprove of you wearing shorts and sleeveless tops and neighbourhoods where you can wear anything and be openly gay. It is a big city with a diverse population, and you find people of your own kind if you look hard enough.” 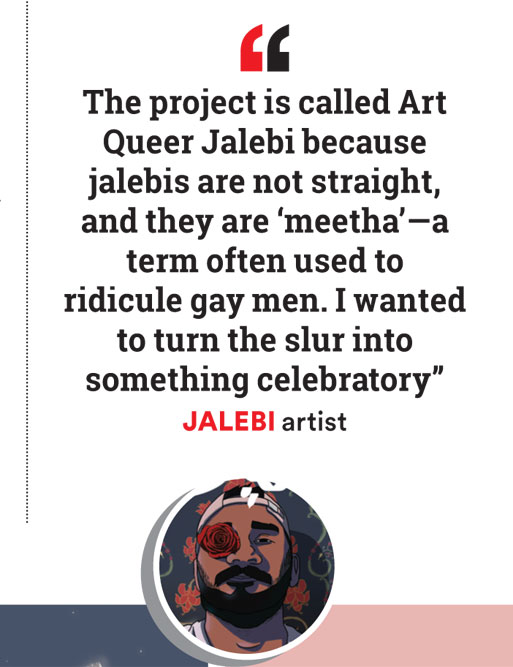 Self-admittedly, he lives within a small bubble, surrounded by people who care about him and “affirm everything” he does. The confidence that comes from being valued and accepted is visible in his illustrations. They are lush, tender, rugged and passionate. The men that appear in them are unabashedly affectionate, fly kites, smoke cigarettes, wear flowers in their hair, and enjoy staring into the night sky. It is a refreshing homegrown aesthetic that celebrates being Pakistani, being Muslim and being gay.

Some of Jalebi’s illustrations are autobiographical; others are based on his friends’ experiences. Speaking of his target audience, he says, “I like to use desi cultural signifiers, reference images that are relatable for South Asians and offer political critique through subtle humour. It is a mistake to think that homosexuality is hidden in Pakistan. It is very much a part of desi culture in parks, hostels, schools, military academies, trains, cabs and fields.”

He wants to convey that homosexuality can thrive outside normative ‘Western’ frameworks of ‘coming out’ and taking on a public identity based on who one likes to be sexually intimate with. The absence of legal or religious sanction for gay marriage does not mean that queer people in Pakistan are not entering into relationships or having sex.

Jalebi is also vocal about the cruelties that the queer community faces. Alongside a recent illustration he made for the Pakistani folk band Sikandar Ka Mandar, he wrote, ‘Queer people forced to marry partners they don’t feel sexual attraction for is a regular occurrence in Pakistan. Despite being out to my family, I am asked every month to marry a girl. Forced marriages ruin both lives.’ This practice is prevalent in India as well, even after the reading down of Section 377 by the Supreme Court of India. No wonder artists and activists are hard at work.

VEER MISRA, 24, is a Delhi-based illustrator who makes digital art and queer zines. Known as @v.eird on Instagram, his signature style is personal storytelling with a poetic touch. He creates a moment of beauty, evokes a feeling and leaves the scene. There is an endearing sincerity about Misra’s work.

He has now started a digital newsletter mush that comes out twice every month to publish longform essays written by South Asians who are members of the LGBTQIA+ community. This newsletter was launched in August, amidst the lockdown, with the hope that stories might serve as antidotes to uncertainty and uneasiness.

Misra says, “A few years ago, I was making work that was really just saying, ‘I’m Indian, gay and still valid.’ As time’s gone on, I’ve gotten older and more settled into my own developing understanding of my identity and lowered the volume of my work.” Having become more conscious of occupying “quite possibly the most privileged queer position in India, as an upper class, upper caste, cisgendered, gay man”, he started the newsletter to build a safe space for other queer people to tell their stories, talk about their triumphs and losses. Misra draws the illustrations, edits each essay and publishes the newsletter himself. 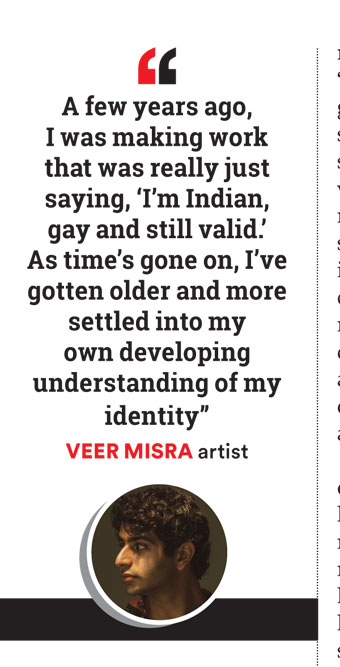 Apart from creating a platform for other queer voices, Misra continues to hone his practice as an illustrator. His most recent post on Instagram is a stunning black-and-white self-portrait with his back facing the viewer and his eyes looking out of the window to a gloomy sky bursting with rain. The caption states: ‘I’m so tired and uninspired.’ Misra says, “I’m a really emotional person with depressive tendencies. I feel really high highs and devastating lows… My work is my way of calming my own self down and of putting a feeling to canvas to make something out of the emotional tightness I sometimes feel.”

He does a lot of his drawing on Photoshop but also works on paper so that he does not lose the ability to work offscreen. Song lyrics serve as points of inspiration for scene building. They help him visualise a situation or place a finger on the vibe he is looking for. Misra says, “Pop music is really cool in the way it can have a deeply cutting lyric coated in this candyfloss type of sonic production, and I try to look at visual art the same way. Lyrics by Taylor Swift, King Princess, Lorde, H.E.R., Imogen Heap, among others, kind of exemplify the structure of what I try to do.”

Misra’s biggest achievement, he says, is the goosebumps he gets every time he remembers the queer person who used one of his art prints to come out to their parents. The conversation went smoothly, the parents were supportive. It made Misra realise how powerful art can be.