A recreation of memories of flora in watercolours 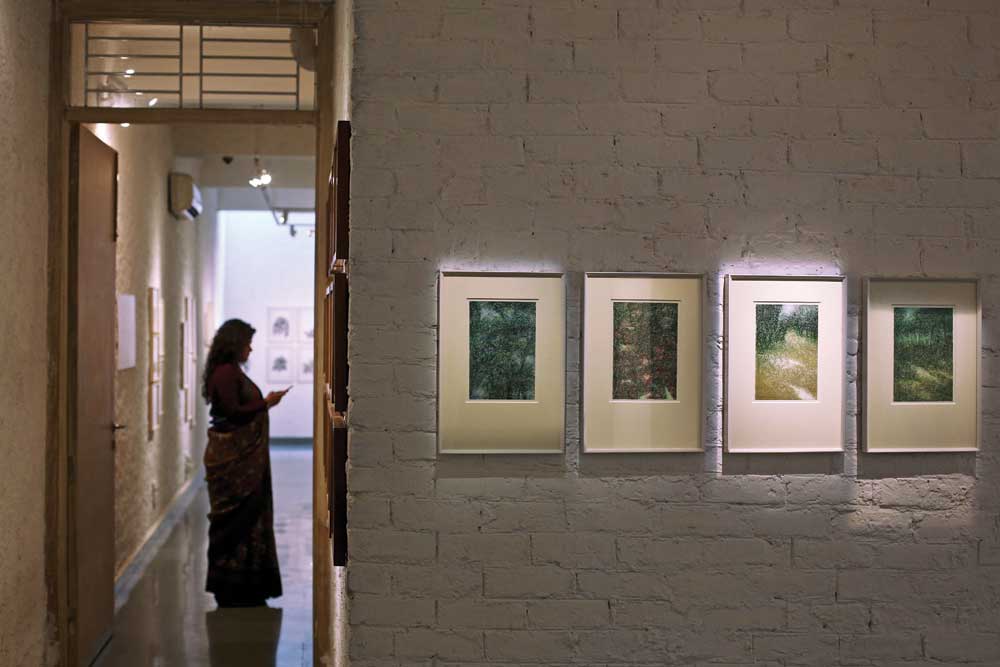 “BETWEEN YOU AND me, oils are just a hundred-year-old phenomenon. And they express a Western point of view. It’s auction houses that have decided that oils are more important than watercolours. On the other hand, watercolours and gouache go back to the Persian miniatures,” exclaims an artist with works on display at Verdant Memory, a watercolour and graphite based exhibition in Delhi.

“My technique demands a brush that is ten times zero squirrel hair. In other techniques, we’d use a brush that is only about three times zero. The delicacy that comes in watercolours is not possible in any other medium. And I apply a base, then another layer. This gets washed. The process occurs about ten times. There are small images that are left behind—small reminiscences from each wash. I love that. It’s not possible in other mediums,” artist Anindita Bhattacharya says. Bhattacharya, who first trained in painting Mughal miniatures in Jaipur and then went to London to study Persian miniatures, would rather be painting trees on textiles in Akbar’s Karkhana. But since she’s born in a different era, she finds her joy in painting childhood memories of the forest that surrounded her greenery-crazy parents’ home in Ajmer.

For V Ramesh, the exhibition comes without the baggage of the political and cultural statements that his works often carry. The teacher-artist, who is most famous for his narrative paintings based on folk tales and medieval poetry, has returned to watercolours after a long time. “I don’t understand why, but I never liked watercolours. Maybe I was scared. Watercolours are more technical. You approach them differently. But in recent times, I’ve gone back to watercolours. Perhaps because there’s no one looking at my work critically,” he says with a laugh. It’s a good thing that he’s finally decided to return to watercolours because his mehendi plant makes you want to push aside the leaves and climb through. “Right now, my studio is in a rented space. There was a huge mehendi plant bang opposite the main door. Women would come to pluck the leaves. People I don’t even know. And since in Andhra Pradesh most women usually apply mehendi in the month of Ashaad (June-July), over the years, I also associated mehendi with the month, and with Mani Kaul’s movie based on Mohan Rakesh’s play about Kalidas (Ashadh Ka Ek Din).”

Typically, he wanders back from the literary to the metaphorical. “Unfortunately, the day I finished the painting, the landlord came and cut the tree. It’s almost as if the tree was waiting for its story to be recorded.” The tulsi he’s created is for his dear grandmother. “Every morning, I’d see her get up and pour a glass of water onto the plant. At that time, I didn’t know about the sacredness of the plant or that you pluck leaves and put it into your tea. Those kinds of stories have nothing to do with my painting. I’m just trying to show the simplicity of a plant in a pot without all its associated contexts.”

Manisha Gera Baswani arrived at watercolours not by choice but by constraint. She’s been working in the medium for four- five years now because her studio is tiny. But she loves what she’s doing because it’s suited to her highly stylistic miniaturist work, done with gold paint on Japanese Shikishi paper.

“I did 12 works for the show and allowed the curator to choose out of them. I tried to bring to mind palatable experiences that moved me. I evoked sensations, tasted, smells, and let it flow. Only when it was finished, did I title them. In Shalimar and Nishad, I’m remembering the concept of the gardens where I’d gone with my parents and cousins. The gardens were in bloom, but it’s not individual flowers I’m evoking. It’s more the luxurious feeling of walking down the walkways through rows of flowers.”

“I tried to bring to mind palatable experiences that moved me. I evoked sensations, tastes, smells, and let it flow. Only when it was finished, did I title the work” – Manisha Gera Baswani

Bhattacharya has produced unusual miniature forests made up of trees like banana, sitaphal and silver oak. “I was also reading My Name is Red by Orhan Pamuk while I was working on these and there’s a tree in a miniature painting in that book that gets lost and tries to place itself in various miniatures as it tries to find its identity. But it was also childhood nostalgia. I was missing trees after living in Gurgaon for seven-eight years,” she says.

Other artists who’ve worked with the metaphor of memories of architectural forms and built surroundings, whose concepts are rooted in forms from nature, include GR Iranna with his ink and gold dust on paper drawings of habitats within trees. Jagannath Panda has also invoked the destruction of natural habitats to build cities with Trance Land, his paintings of two stags fighting against a green background and then against a built geometrical city.

And in the midst of all this sylvan beauty is an exquisite small watercolour called Monk Praying; Arpita Singh has used colour to chilling effect to show the kneeling figure of a Buddhist monk praying in the centre of a fallen, arched door and shards of green glass. Singh’s other watercolour reflects the interface between man and nature in the rendering of a naked figure of a man trying to get out of the way of a flowering shrub.

Atul Dodiya’s six watercolours also evoke a sense of melancholy. They are replete with imagery where the plants overshadow the humans. The images—of a nun walking towards a thorn bush and a disembodied head with a cross of flowering twigs above it; a woman dressed in a Maharashtrian sari seated below a massive pumpkin plant and a menacing dark sky; a man lying in the shade of a barely leafed plant and a man grieving next to a huge cotton plant—are almost threatening and definitely unsettling. As he says, “The humble flowers teach us how to live without proclaiming or shouting ‘look at me’. Their short life and constant change leaves a fragrance behind… teaching us how to live. It is God’s greatest gift to us.”

A Ramachandran had once written how his boyhood memories of growing up among rice fields and lush lotus ponds in Kerala shaped his artistic vision. Here, the 83-year-old artist has created beautifully-rendered pictures of unusual and exotic plants like lilacs and daffodils. Each detailed rendering of a plant has at least one locust, caterpillar or butterfly with the artist’s face looking at the plant. Where his works are wry, his wife, Chameli Ramachandran, has created equally beautiful and detailed paintings with Chinese ink and watercolour on paper. In eight paintings called Fragrance of Childhood, you can almost see the play of sun and shade on periwinkles; and the bowing of the exquisitely detailed plants to the wind. You realise very quickly that you’re in the presence of a master miniaturist.

Another master miniaturist in the group is Sebastian Varghese. His painting of the plant touch-me-not, with the leaves folding in on themselves as a human hand reaches towards it, reminds one of childhood games. Memoirs 4: Coconut shows a Coconut in different stages of growth, from a tender plant to a hard shelled fruit, is equally evocative.

Manjunath Kamath, Seema Kohli, Priya Ravish Mehra have chosen to work in unusual mediums. While Kamath has used gouache and varnish on wood as well as painted ceramic figures to create paintings of flowers, plants and seeds, Kohli’s Memoirs is a collection of 16 zinc plate etchings that have both negative and positive versions. These include a bamboo stool with a newspaper lying on it; a game of snakes and ladders; various tea pots of different shapes and sizes; painting equipment; the ubiquitous monkeys that play on treetops in crowded Delhi streets and a woman daydreaming. In the next room, in four paintings, Mehra has worked with paper pulp, Chinese ink and ears of paddy to create forests, while in others she’s used natural dyes on fabric with paper pulp. Mehra’s works not only invoke the strength of a coarsely woven fabric, but also the rugged durability of the original source materials.

Perhaps the most memorable works in the show are Gargi Raina’s vivid, hallucinogenic paintings of exotic flowers. The four works, collectively called There’s No Turning Back are created in gouache and mixed media on paper. Each shows a plant, an insect and a photograph from a different period in Raina’s life. The works are dramatic and foreboding and the message is obvious.

The range of artists and themes they’ve chosen, from the simple to creative, ensures that this exhibition leaves viewers with a secret garden of recollections.