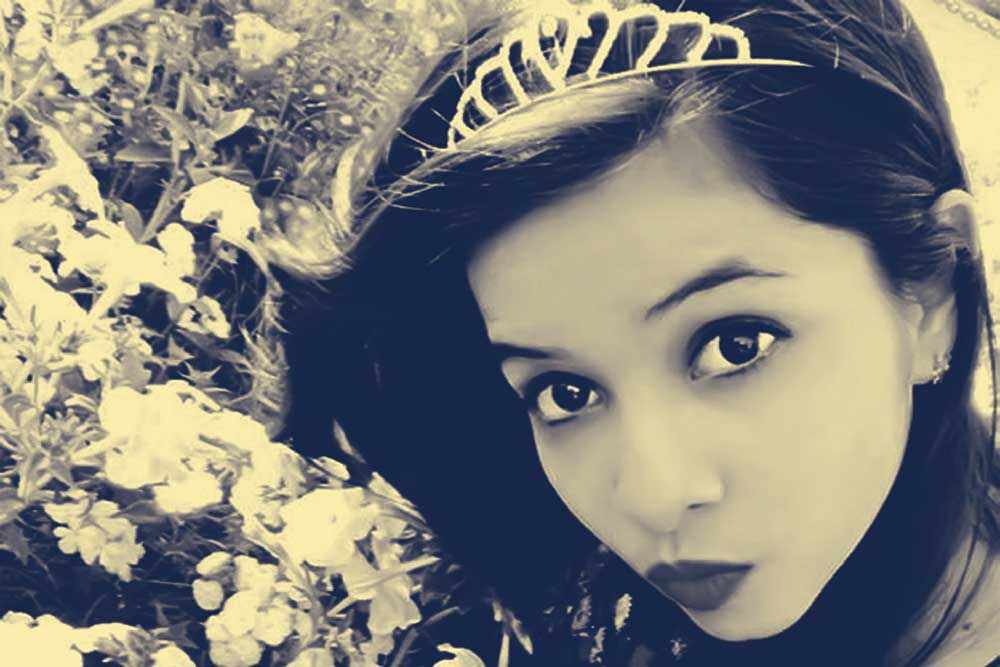 LONG BEFORE CRINGEPOP became an officially enshrined genre of music, Vennu Mallesh, an aspiring scriptwriter from Hyderabad, crashed the gates of YouTube with a painfully funny and arguably delusional music video. It went: ‘It’s my life whatever I wanna do/ It’s my life wherever I wanna go/ It’s my life whomever I wanna love oo oo… I always search good in bad/ And I search bad in good/ I am a very good bad boy’. The music was a tonal soup with bad drum fills, the words were straight out of a fevered dream and the delivery was bland as water, yet Mallesh seemed totally into it, eyes shut and head swaying passionately to the jangle of the guitar as though recording the hit of the decade. The song, his first, has been viewed over 10 million times—many Bollywood hits struggle to cross this milestone—and the comments section is pure gold. ‘I came looking for Bon Jovi’s song but found this treasure,’ says one viewer. ‘Legend says the recording studio is still haunted,’ goes another. Some proclaim that the song saved their life or, alternately, that it deserves to be played at their funeral. One snark has amassed 484 likes for theorising that Mallesh’s lyrics ‘have a deep meaning, criticising the social structure and pressure from outside in Indian society’.

There is something vaguely revolutionary about music that dismantles the convention of trying to sing passably. The transgressive act of assuming a fool’s persona and presenting one’s worst face to the world was the end of civilisation as we knew it, and the beginning of the reign of illusionist popstars like Mallesh and Dhinchak Pooja on YouTube. They were the Indian Hero Alom and Taher Shah, among the most hated YouTube sensations from Bangladesh and Pakistan. Their work was an affront to good taste, and yet, if we deigned to sample it, it reeled us in like fish floudering in the great depths of the viral web. Were they consummate comics, pledging their personal dignity to take their character into the real world? Or were they really naive and involuntarily funny? Parody or the real deal, their work was catnip to a cheerfully disillusioned audience.

With videos of the biggest Indian cringepop sensation recently getting deleted from the internet, ostensibly due to copyright infringement, though there is widespread suspicion that Dhinchak Pooja has set a grand plan in motion, other bad singers are happily witnessing a spike in views and reaping a harvest of negative publicity. Vennu Mallesh, 33, is among the many YouTube personalities to have been anointed Pooja’s offkey brethren. He doesn’t acknowledge her, however, attributing his fame to his ‘passion’. Back in 2012, he had spent Rs 50,000 on recording and editing his first song. Casual YouTube singers, including Pooja, don’t even bother syncing audio. Mallesh has since recorded six other cringe-worthy songs, spending between Rs 30,000 and Rs 1 lakh on each, besides a few home videos. ‘I have always known that I am a good bad singer,’ he says over a WhatsApp chat (his choice, not mine) strewn with cliche and random capital letters. ‘I am not good but also not bad. No matter what haters say, I know my tunes are catchy. I try to do my best with the ideas I have. That’s why they get so many views,’ he maintains. An engineering college dropout, Mallesh claims to have made Rs 8 lakh from YouTube in the past four years. He doesn’t fancy a 9-to-5 job and spends much of his time working on a screenplay that he hopes to start filming this year. He says he has no other source of income, even though he has to financially support his wife and child. ‘I always wanted to make music videos,’ he says. ‘My intention is not making money or becoming famous. I just want to do things that make me happy.’

“I am not good but also not bad. I know my tunes are catchy. I try to do my best with the ideas I have. That’s why they get so many views” – Vennu Mallesh, cringepop star

When Mallesh dubstep-dances in front of an office complex to a song about an icebucket challenge, snipers are sure to emerge from the deepest trenches of the web to shower bullets of abuse—and page views—on him. What does it feel like to be skewered by people half his age? ‘I don’t care,’ he says, ‘It’s My Life Whatever I Wanna Do…’ His oeuvre may be limited but it has spawned hundreds of reactions and roasts, which in turn have garnered millions of views.

The symbiotic world of bad performers and lowbrow roasters is a cottage industry that doffs its hat to Honey Singh’s ‘faadu’ pop and All India Bakchod’s sensational celebrity roast of 2015. The AIB act opened the floodgates to a new, irreverent brand of humour that young YouTubers adapted to comment on the most absurd aspects of Indian pop culture—from Punjabi rap and Hindi sitcoms to fake American accents and speed dating. Most of these amateur clips, in cool collegiate Hindi peppered liberally with curses, channel viral videos for trickle-down effect but also because they are low hanging fruit. “Every roast channel in India is being sustained by videos on Dhinchak Pooja these days,” says Rony Dasgupta, 21, of The Rawknee Show, which has featured four such videos, with just one of them, situating her in a fictional X Factor audition, accounting for over 2 million views. Pooja’s videos beg ridicule, and for this reason, become highly shareable on social media. Her two-month-old video Selfie maine leli aaj has close to 22 million views, and her latest, Dilon ka shooter, uploaded just three weeks ago, has 8 million. “Roasting is a badnaam thing in India, almost as vilified as some cringepop videos,” says Mumbai-based Dasgupta, a VFX editor who decided to try making money on YouTube rather than work for an animation company. It is not a sustainable profession yet, he says, but he is trying to ramp up by making four-to-five videos a week. YouTube’s Cost per Mille or CPM, which is the amount paid per thousand views on YouTube, is under a dollar for India whereas it can go up to $7 for some countries.

“Most of us do this for fun,” says 20-year- old Deep Thapar, a graphics designer who runs the channel Your Guy Hooder, with a little over 33,000 subscribers and 3.5 million total views. “There are about 1,000 roast channels in India and all of them have mushroomed over the past year or so.” Millennial roast culture in India began with CarryMinati, aka Ajey Nagar, an 18-year-old with nearly 1.5 million subscribers and 172 million views to date. Among his first videos were roasts of BB ki Vines, a humour channel hosted by YouTube celebrity Bhuvan Bam, and the inimitable Dhinchak Pooja. It was his roast a year ago of Pooja’s Swag wali topi that further cemented the internet’s fixation with her. She, however, later accused Carry of using her as clickbait to grow his channel. The Oprah effect he had on Pooja’s career made aspiring roasters discover other such wannabe sensations, says Thapar. In a matter of months, there was a whole new community of comics that was inter-referencing one another’s videos, doing parodies of each other, and piggybacking on Carry’s or BB’s celebrity. They targeted their comic ire at the likes of Avi Gujjar, an atrocious kid with a song about his gun, Swagger Singh, an offtune rapper modelled after Honey Singh, Gunjan Pal Singh, who made a creepy music video about the girls of Kullu-Manali, self-proclaimed DJ Avik Chatterjee who lent his voice to a video by the sleazy YouTube channel Secret Romance, and Professor Vinay Sharma, a low-budget MJ clone. Some of these little-known ‘artistes’ were catapulted to a few days of fame by roasters who systematically eviscerated their videos, scene by scene.

For those who have somehow remained insulated from the coarse contents of CarryMinati or Bakchod Baba Ji videos, roasting is not about sidelong insults. It is a blood sport, typically splicing footage from the video being roasted with abusive commentary, memes and gameplay of an action title like Dead Rising or Just Cause. As a roaster gains in stature, he attracts a loyal following of bros, and begins to post ingratiating facecam videos every now and then. If you are a 15-year- old who cannot be bothered to look for subtext, and prefer your comics without any sense of propriety, you will not be disappointed. These channels offer a release valve for teenage vicissitudes, but just as with their patron saint Dhinchak Pooja, there is a calculated magic to them. “AIB’s dry humour, delivered in English, is not for everyone. Indian youth have a big appetite for easily accessible jokes in Hindi, about people and things they are familiar with through social media,” says Dasgupta. “They need roast videos to be amateurish and the hosts to be believably awkward.”

Awkward doesn’t begin to describe this reality show for and by millennials where a cruel slice of humanity preys on offbeat—sometimes literally so—YouTube performers by implicit mutual consent. “If a video gets watched or made fun of, that means it is a successful video. That’s all we care about,” a teenaged YouTube rapper tells me. “Like Honey Singh says, ‘Mujhe sab pata hai/ kaun kaun mujhse sadte hain’ (I know well who all grimace at me.)”