Who will win Delhi polls?

After having tasted easy victories in Maharashtra, Jharkhand and Haryana, Delhi is suddenly proving to be a pain in the BJP's lotus stem 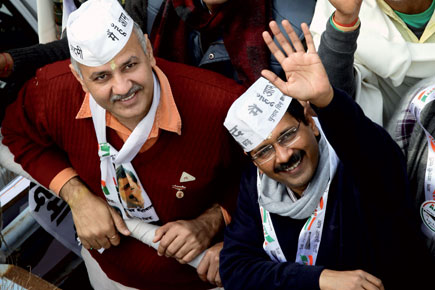 The Delhi elections have just gotten bigger, bolder and better. With few days left for elections the local akhada has become a national battle field. Judging the mood of the Delhiwallahs– from office goers in Metro to aunties at the local grocery shops, to the nukkad chai sabhas of the elderly, the media has willingly-unwillingly overturned the Delhi elections. It is no longer just another state Assembly election. It has become a national war. And it’s not because of the Kiran Bedi vs Arvind Kejriwal fight. It is because of the role that the media has played in the last one month.

Up until last month media reports were suggesting that the BJP had an upper hand in the Delhi elections. Just like other states, Delhi too would be an easy win. Only sweat, no blood would be shed. But come New Year, the tables have turned. The same media has placed Kejriwal on the top. Barring except the obvious, the media of Delhi has made Arvind Kejriwal their poster boy. By giving extra newsprint space and additional air time to Kejriwal and his style of politics, the BJP managed to earn headline space only during the much hyped Obama visit. And with the recent opinion polls (minus India TV-Cvoter) showcasing Kejriwal as the top contender in maybe winning the coveted Delhi seat, the BJP has become edgy, nervous and restless. After having tasted easy victories in Maharashtra, Jharkhand and Haryana, Delhi is suddenly proving to be a pain in their lotus stem. The constant reports and coverage in newspapers and on live television about snotty arrogant nature of their Chief Ministerial candidate has made Amit Shah and Narendra Modi apprehensive. This nervousness is becoming visible by the kind of strategies that is being pulled out in the last leg of this election.

The preparation which is being undertaken in the war room of 11 Ashoka Road is not as much to counter Arvind Kejriwal as it is to counter people’s mood reflected by the media. By organising rallies and road shows all around the city, throwing in ads for all pages of the newspapers, the BJP is trying everything to create the lost hype in the media, in order to win the people. With such preparation being undertaken, one can only assume that Modi- Shah have fallen in the trap that the media has set for them. It is a fact that even before projecting Kiran Bedi as the Chief Ministerial candidate, the media had started reporting on the nervous, disarray mood of the party. This came more after the flop show of Prime Minister Narendra Modi’s 10 January rally. To counter that nervousness, the BJP felt right in launching Kiran Bedi.

Kiran Bedi thus became the perfect adversary against her once upon a time fellow. She became almost so perfect that Amit Shah did not think twice before naming her as the Chief Ministerial candidate. But this move made by Amit Shah only gave the media the open space to become more loud and vocal and speak about the nervousness which had gripped the high command of the BJP (aka Amit Shah and Narendra Modi). All these constant reports by media propelled the BJP to make their last and final move. Opening the floodgate! Calling in 130 MPs from 13 states and organising 250 rallies for just eight days, the BJP has openly and publicly showcased their anxiety.

But then again, who can blame them. The media has in a classic way turned this election into a David- Goliath war. Delhi election is just no ordinary city centric election. It has turned into who can win this peculiar war of psychological nerves. By portraying Kejriwal as the single lone underdog, they have managed to vie people’s sympathy and empathy towards him and his party.

After all, Arvind Kejriwal has shown that one should not underestimate the power of the common man. Moreover, he has shown that he cannot be taken lightly. He has learnt and understood the P’s and Q’s of the Indian Politics and will be here to stay for a long time. On the other hand, the national ruling party the BJP has been showcased as having all the might, but eroding sheen.

It is certain that 10 February will be a yet another important date in the calendar of Indian politics. It will bring forth a new picture of the Indian politics. Who will win this David vs Goliath war, we will soon know. But till then let’s applaud the media. After a brief hiatus in ‘self censorship’, it has opened up and is still able to influence and dictate the terms of political warfare!