Calling for a reformation movement in Islam, Ayaan Hirsi Ali in her new book argues that the problem with Islam lies within 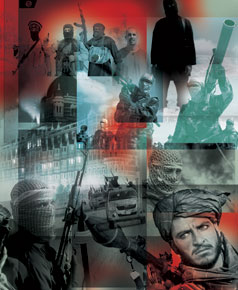 Man thinks and god laughs. Maybe this Yiddish proverb needs to be updated. The banality of that videotaped evil—the man in an orange gown kneeling before his hooded executioner somewhere in the desert-caliphate of the Islamic State—keeps telling us that what is written in the Book, as it is being enacted in the battlefields of faith, is not good for the world. Or for the religion itself. It requires nothing more than the blasphemy of a rogue word, the irreverence of a cartoon, the audacity of a film, the ungodliness of laughter, or the waywardness of imagination, to aggravate the bloodlust of those who seek paradise (literally) by building hell on earth. Man kills, God laughs.

Still, talking about Islam is problematic today, given the alacrity with which the epithet ‘Islamophobe’ is being thrown at anyone who dares to question, or initiate a conversation on a religion in whose name the worst crimes against humanity continue to be committed in our time. And that is why the searing voice of Ayaan Hirsi Ali needs to be heard by the saner majority within Islam and all those who have a stake in peace. Her new book, Heretic: Why Islam Needs a Reformation Now (Harper,271 pp, Rs 599), is a call for a protestant movement in the youngest Abrahamic religion by someone who, born in Somalia and having grown up in strict accordance with orthodox Islam in places such as Mecca and Nairobi, finally found her freedom in the West. (She tells her riveting backstory in her breakthrough book Infidel). Marked for her apostasy, Ali, now a scholar-feminist-activist living in America, is a one-woman demolition squad pitted against the terror and travesties of a religion she thinks is rooted in malevolence and subjugation.

Ali is aware of her higher provocation quotient, and, as she says, she makes liberals, Western or otherwise, uncomfortable not by drawing cartoons but by challenging ‘centuries of religious orthodoxy with ideas and arguments that I am certain will be denounced as heretical.’ At the outset, Ali rejects the tired refrain that ‘terror has no religion’. Whenever another headline—or a video image—of horror shatters the complacency, the response from leaders and pundits goes like this: Come on, this is not Islam, this is the barbarism of a few in the name of Islam, which, like any other religion, abhors violence. Wrong, says Ali, it is not the sociology that kills, it is the Book itself. It is not a matter of scriptural misreading but the purpose of the scripture itself. The slash-and-bomb theology repudiates the naïveté of ‘violence has no religion’. This is an inflammable argument and, as Ali shows in polemical flamboyance in her fourth book (after The Caged Virgin, Infidel and Nomad), truth always is.

The world is being left to bleed because, in Ali’s view, the actions and ideas of those she calls ‘the Medina Muslims’ go unchallenged by the majority—‘the Mecca Muslims’— within the religion. The first group is inspired by the Prophet’s ‘warlike conduct’ in Medina, and it is these Muslims who seek glory through jihad and the annihilation of the infidel. It is the Medina Muslims who sustain organisations such as al Qaeda, ISIS and Boko Haram, and continue to invent enemies for the perpetuation of its terror. The Mecca Muslims, the devout majority, abhor violence and identify with the Prophet’s peaceful phase in Mecca, though ‘their religious beliefs’, Ali writes, ‘exist in an uneasy tension with modernity’. Then there is a third group: ‘the Modifying Muslims’. Some members of this group, like Ali, have ceased to be believers but are concerned about the future of the faith. They are the heretics. Most of the Modifying Muslims, though, are ‘reforming Muslims’, and among them are scholars and clerics.

The rise of Medina Muslims makes the sword of Islam the abiding metaphor of 21st century violence—and unfreedom. The liberal explanation is that it is a manifestation of the political, social, and economic reality in the Muslim world. Ali’s argument is that ‘religious doctrines matter and are in need of reforms’—a Lutheran renewal in Islam. And it has to begin from its very fundamentals. Ali, in her own words, is no Luther, but she has theses, not ninety-five of them, but just five, which she, with her amazing persuasive powers, nails on our conscience and reason. These theses—or fundamental amendments for an Islamic Reformation—are necessary to arrest the descent of this religion into the seventh century. Ali rejects the Book of Actually Existing Islam.

Her first thesis is that faith need not be blind: the Prophet and the Qur’an should not be above critical inquiry. What is required here is a rethinking on the Quranic text itself, subjecting it to ‘the same scientific, archaeological, and social scrutiny the Bible has received.’ The Prophet and the Book have been kept out of scholarly scrutiny by traditionalists such as the 12th century imam Abu Hamid Muhammad ibn Muhammad al-Ghazali, who wrote that ‘blind obedience to God is the best evidence of our Islam’, and who is today an inspiration for the killers of Boko Haram and Islamic State. ‘The crucial first step in this process of modification will be to acknowledge the humanity of the Prophet himself and the role of human beings in creating Islam’s sacred texts,’ writes Ali.

Her second thesis is a repudiation of Islam’s ‘fatal focus on the afterlife’. Every suicide bomber carries with him a one-way ticket to paradise, where, in the words of al-Ghazali, ‘each believer will be given such strength in the morning as he can cohabit with [virgins who] do not sleep, do not get pregnant, do not menstruate, spit, or blow their noses, and are never sick.’ Surely, a better place than the Middle Eastern ghettoes for the prospective soldiers of God. The cult of martyrdom in Islam is built on rejection of the here and now. There will be more economic development in the Muslim world, says Ali, ‘if imams started talking about making this world a paradise, rather than preaching that the only life that matters is the one that begins at death.’

In her third thesis, Ali argues that Muslims have to be liberated from the shackles of sharia, the unforgiving religious code. As she asks, for example, ‘how can there be any position on stoning other than that it is barbaric and evil?’ Still, liberals in the West and elsewhere continue to condone such acts of human rights violations. For them, such barbarities are topics of ‘religious sensitivity’. For Ali, they only strengthen her call for an Islamic Reformation.

Her fourth thesis wants an end to the Islamic practice of ‘commanding right and forbidding wrong.’ It is this tyranny of righteousness that justifies honour killings and other crimes against women in Islamic countries. It is a practice that feeds on fear, and it is incompatible with individual freedom. ‘Only when Muslims are free to say what they want, to pray or not to pray, to remain Muslim or to convert, or to have no faith at all; only when Muslim women are free to wear what they want, to get out as they want, to choose the partners they want—only then will we be on a path to discover what is truly right and truly wrong in the twenty-first century,’ she writes.

Ali’s fifth thesis is a rejection of jihad. If the transnational war of Islam is winning, it is because there are countries out there willing to fund jihad. The global jihad would not have reached this far without the benevolence of Saudi Arabia and other oil-rich sheikhdoms. The sanguineous fantasy of an Islamic state takes the idea of peace out of the narrative of a religion that consistently defeats itself. Yesterday, it was New York or Mumbai or Paris, and in each instance, the Book was the killer’s manifesto.

Ali may have abandoned Islam as a faith, but not hope. She sees the first stirrings of reform as she watches the sudden possibilities of information technology in the Muslim world. Technology kills as well as liberates. The other two encouraging factors are the impact of Western values of freedom on Muslim immigrants and the emergence of political space for reformists in some Middle Eastern countries. It is the approaching ‘dawn of a Muslim Reformation’ that keeps Ayaan Hirsi Ali, the heretic who cuts through the paranoia and paroxysms of an angry god, an optimist. She knows that, in the end, ideas alone can win the argument for freedom. For the heretic, no book is sacred. Conscience is.