Vive Paris: The Beginning of History

What 13 November means for our newly tribal world 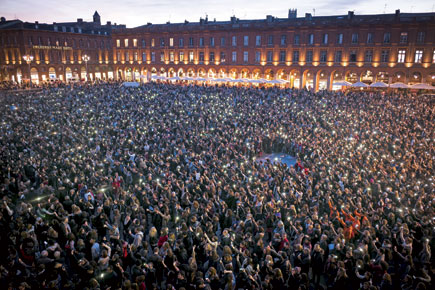 Until recently, history seemed like a nightmare from which Paris had long ago awoken. The stupid fights over religion, economics and race that had periodically scarred the last thousand years of European life belonged to the picturesque past. Even Germany, France’s perennial foe, was now feared only on the football field.

But the six coordinated attacks that killed 129 people in six locations last Friday night may have brought the nightmare back. If there were any lingering doubts after the Charlie Hebdo massacre this January, the 13 November events and the French government’s response to them suggest that history has returned to Paris.

Now, the news out of France seems to be following the American script in the aftermath of 9/11, when the Bush Administration persuaded anxious Americans that more military force and broader legal and surveillance powers were needed to protect the place they started calling the Homeland.

In retrospect, all this began years before last Friday. I don’t know much about angry, disenfranchised French-Arabs in the suburbs, or the degree to which the ISIS leaders intended the actions as a response to bombings of their camps in Syria and Iraq, but I do know that something hadn’t felt quite right about Paris for several years before we left in 2014.

Even on our street, all kinds of little things had started to feel unfamiliar, both rougher and smoother at the same time: the shattered glass door I found one morning in the lobby of our building, the growing numbers of clochards looking for handouts, and at the same time, the refurbishment of our worn and slightly dowdy shops and cafés, which had been transformed one by one into chrome- edged marble boxes with spot-lit tables and oversized video screens.

Paris had begun to feel more divided between haves and have-nots in other neighbourhoods as well. We saw more gendarmes frisking young Arab men in the park and more soldiers with machine guns patrolling the train stations and monuments. And more actual danger too: one spring morning near the Madeleine we saw an Asian woman being pushed to the ground by a pack of young Roma women.

France as a whole also seemed more nervous, both about immigrants and about the world. This anxiety sometimes showed itself in odd ways. On a long hike we took in the south a few summers before, for instance, people in two different villages told us the same story they had heard about people who had visited China with their dog which they turned over to a waitress for safekeeping during dinner but had their instructions misunderstood and their pet returned to them as the main course.

Of course, I doubt that this ever actually happened, but the image of Fifi as food had haunted them somehow, I guess because it summed up a sense that barbarians were bound and determined to spoil their life, and that they would be powerless to stop it.

Certainly the most hotly debated political questions were not about how to meet the challenges of a changing world, but how to keep those changes at bay: how to stop the retirement age from going up, how to stop Muslim women from wearing burkhas on the street and Muslim girls from wearing headscarves in school.

Over time, in the eight years we lived in Paris, I started to get the sense that the White bourgeoisie saw themselves trapped on one side by a world of socialist-enforced economic stagnation and a growing underclass, and on the other, the financial pressures created by the popularity of Paris as a playground of the global rich—exacerbated by the brain drain caused by so many of their best young people taking off for London, New York or Berlin.

But besides being gloomy, the French can also be quite stubborn. The street where we lived, Rue Cambronne, was named for one of Napoleon’s generals, famed for responding to a request for surrender at Waterloo with a simple merde, which in context meant something like ‘go to hell’.

President Hollande hasn’t brought the word the French still call the mot de Cambronne into his speeches yet, but he is speaking now in a more determined way. Unlike his comments after the Charlie Hebdo massacre, when he made the usual noises about the need for tolerance, his statements in the wake of this disaster have focused exclusively on the capture and punishment of the killers. He still has that look of a tax clerk with bad digestion, but on paper at least, he is showing a new tone of command:

“We’re going to fight this battle, and it will be merciless, because when terrorists are capable of carrying out such atrocities they must be certain that they will face a determined France, a united France, a France that comes together and a France that will not be cowed, even though today it is expressing unbounded shock at this tragedy, which is appalling because it is barbaric.”

So far, his administration is proceeding on two fronts against the killers: first, stepped up bombing missions in Syria, and second, massive manhunts to break up any other outstanding ISIS cells within France.

He is also calling on parliament to grant the government a variety of new legal powers that go even beyond those they were given in the wake of the Charlie Hebdo attacks. One that has civil libertarians worried is the power to strip dual-citizens convicted of terrorist-related offences of their citizenship, a rule that they argue would essentially make some citizens more French than others.

This doesn’t worry some right- wingers—the Républicain mayor of Nimes, for instance, described Friday’s attacks as “a civil war”—but it is far from the French tradition of being so committed to legal equality that the law bars the government from even asking people their race or religion.

At least initially, I suspect he won’t face much opposition in these plans. After Friday’s attacks, a surge of feeling for la patrie (the homeland) will bear him along, like the spontaneous chorus of La Marseillaise that fans at the Germany-France football match broke into when they were finally allowed to leave. It’s a wonderful tune, and much better than the ordinary run of national anthems. But it’s also not a song for the pacifist:

As the newspaper Le Parisien headline shouted on Saturday, ‘This time, it’s war’.

This kind of patriotism makes me very nervous. I remember that feeling in New York the first days after 9/11 when we worried whether something else would happen. We were scared, but we felt a special kind of belonging, too, and a certain frisson of being part of something significant. I’ve seen recollections of that feeling here in Germany as well, in interviews where people remember the Nazi era—the old man remembering how proud he was to be marching so well with his phalanx at the Nuremberg rally, the old lady, blinded in the war, who remembered how generous people were with each other, and how close she felt to the other Hitler Youth, not like kids today. Of course, as the Germans learnt, to their shame and sorrow, the dark side of defining an ‘us’ is that sooner or later, you’re also obliged to define a ‘them’. It’s no accident that the German constitution begins with the sentence, ‘Human rights must be respected’. Not German rights; ‘human rights’ everywhere. It’s also why nationalism is still generally regarded here as something almost akin to a manic-depressive disorder.

What worries me about the way this seems to be playing out is that France never went through the same reconstruction after the war as Germany did. The war, after all, had not been their idea. Despite the fact that the Vichy government proved itself at least as viciously anti-semitic than the Nazis, and despite France’s brutal colonial wars in Algeria and Vietnam in the 1950s, the French still feel pretty good on the whole about being French. Like Americans, the French have an exceptional ability to feel exceptional.

In its glossy online magazine Dabiq, ISIS already counts France among its ‘Crusader’ enemies. They did have a case, given that France was already making bombing runs against them in Syria, and that its arms industry—the fourth largest arms exporter in the world—counted Western-allied Saudi Arabia, Egypt, and Qatar as its top three customers. But the truth is they haven’t seen anything yet, either inside or outside France.

Already, there have been 160-plus police raids across France. An alleged mastermind is being sought in Brussels. And that’s only the beginning. As the French Interior Minister Bernard Cazeneuve said on Monday, “This is just the start, these operations are going to continue, the response of the Republic will be huge, will be total.” Hollande meanwhile is looking to set up a grand coalition with Russia and the US, although Obama has ruled out sending Amerian soldiers back in.

For the vicious people behind the Paris attacks, fair enough. For the hundreds of thousands of innocent Iraqis and Syrians who may be incinerated along with them or left to freeze on some Balkan mountain pass this winter because of European xenophobia; the young French Arab who won’t get a job stacking fruit at the market because the manager is afraid he will come to work with an AK-47; or the French soldier who steps on a mine in some Syrian village alley next month, somewhat less justice may be served.