It was part two of the Indian enchanter in America, and this time Narendra Modi was feted as the man who will accompany Silicon Valley to its next level of glory, even as the Valley takes India with it—to heights as yet unforeseen, except in the mind of the man who once sold tea on the sort of railway platform that will soon be kitted out with free WiFi by Google 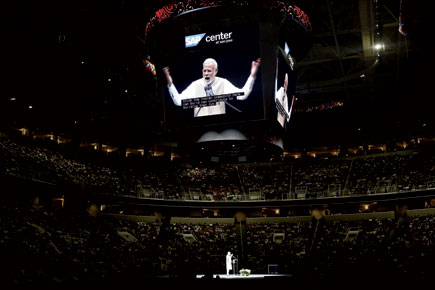 I watched the year’s best Hindi movie last week, one set—like so many other Indian movies these days—in a foreign locale. Not in the Alps or in London, or on Australia’s Gold Coast, but in humdrum San Jose, California, ground zero for the industrious, patriotic, increasingly assertive, curd-and-pickle-eating, expatriate Indian uber-geek. The hero wasn’t particularly handsome. Nor, mercifully, was he muscle-bound in the way of the Salmans and the Akshays. His posture was just shy of hunched, and he wore a beige waistcoat and clipped white beard, intoning his words in a way that conveyed a strength that wasn’t just exhilarating, but also a little menacing. It wasn’t a physical strength, nor even a particularly moral one. Instead, it was the strength of a man on a very personal mission, a man who asked for your full attention in a way that wouldn’t take ‘no’ for an answer. It was my-way-or-the- highway, in Hindi.

‘An Evening in San Jose’ doesn’t have quite the same ring to it as ‘An Evening in Paris’. And Nancy Pelosi, the House Minority Leader, was scarcely a match for Sharmila Tagore in a bikini. But she and ten other politicians of American consequence—including the inevitable Tulsi Gabbard of Hawaii, without whose winsome Hindu presence no prime ministerial visit to America is entirely complete—were on stage as high-octane extras for the night with our cinematic hero, Narendra Damodardas Modi, Prime Minister of India.

As he stood on stage before his speech, an Indian deity with his American apsaras—one of whom was among the most powerful Democratic politicians in the land—I couldn’t help thinking that this was the theatre of revolution.

Modi was in America, conducting a full-blown session of Indian politics in San Jose, the home of everything that’s also quintessentially modern American. His audience was a mass—18,000 strong—that lives and votes in America, and yet breathes and seethes India. Many in the audience of ‘software southies’ spoke Hindi as awkwardly as they spoke English. Their role model, Sundar Pichai, CEO of Google, couldn’t even pronounce ‘Modi’ correctly, his ‘d’ being hard (as in ‘anda’—egg) when he enunciated it in his Tambrahm welcome to the Prime Minister at the Google campus that morning.

Here was a foreign Prime Minister, in the heart of one of the few parts of America that’s still unbeatably world class, addressing an audience of his own countryfolk—who were all either citizens of America or aspiring to be —as if he were their undisputed leader. He did the same last year in New York, at Madison Square Garden. I can’t think of a single politician from any other major country in the world who could come to America and muster a comparably large and passionate expatriate crowd for a patriotic political rally. Putin? Forget it. Xi Jinping? Unlikely in the extreme. The president of Mexico? Not a prayer.

This is revolutionary. You have in America for the first time a significant population of immigrants—Indian- Americans—who are from a country of major global consequence, and who, even as they immerse themselves in American politics, remain committed to the politics of their land of origin. Chinese-Americans abhor the politics of China. Russian-Americans are fearful of Putin. Mexican-Americans are here because Mexico is a backward place that has failed them and their aspirations. Indian-Americans, by contrast, are indissolubly Indian in their political convictions. As their numbers grow, and as their immersion in America—and its politics—continues, their impact on America’s relations with India will be profound. No one understands this better than Modi.

His performance in San Jose was masterful, and it appeared that he and his minders had learnt from the mistakes they made last year in New York. Unlike at Madison Square Garden, the event in San Jose began with a rendition by Indian-American children of the Star-Spangled Banner, made all the more beautiful by the Indian flavour of their song.

If there is a valid complaint against Indian-Americans, it is that they pay insufficient court to the customs of America. Yes, they work hard, and pay taxes, and set a good civic example of self-sufficiency and industry, and send their kids to university (even as the best schools have unconscionable unofficial quotas capping the numbers of ‘smart’ Indians they admit). But they don’t seem—at least in the public eye—to do the small things that Americans cherish, like flying the flag and singing the anthem and going that extra mile to take the edge off their foreignness. It doesn’t help that there are no Indian-American ball- players, or fire-fighters, and very few cops and soldiers; and it doesn’t help that Indian-American families have, on average, the highest incomes in America. Ordinariness, a cherished American state, eludes the Indian-American. Spelling bees don’t help either. You know what I mean.

Omitting the American anthem at Madison Square Garden last year was a blunder. But it was sung at San Jose, followed by the Indian national anthem. This was the right and respectful sequence in America. Modi, a nationalist of the utmost stripe, understood that. For his Little Platoons here to be of proper use to him, they have to be as American as they are Indian.

This has been a curious visit to America by Modi. It has had its powerful moments, and its disconcerting ones. Watching his sawaal-javaab—or call-and-response—session with the crowd at San Jose, one was reminded of nothing so much as an evangelical preacher of the American variety. Do you see the light? Yes, I see the light!!!!!

A religious Christian American with no knowledge of Hindi could have watched Modi on stage and felt at home. This was charisma and conviction and certitude. This was a leader offering deliverance from evil; and as with every such offer, there was menace in store for those inclined to spurn it.

Modi is a Manichaean man. His world is black and white, robustly free of nuance. Occasionally, because of its lack of subtlety, it can seem to be a place without kindness and humanity. Modi’s visage is stern, his words lapidary, his delivery rhythmic, and frequently headmasterly. When he speaks, you look hard to see if he has a cane in his hand; you keep your palms flat under your thighs—except when you free them for applause, which is always slightly manic, as if a failure to clap could lead to punishment.

And yet—humanity there was, and tears, at Mark Zuckerberg’s Facebook ‘Townhall’. Zuckerberg posted the clip of Modi choking up while talking about his mother’s sacrifices on his very own Facebook page, getting tens of thousands of ‘Likes’ for it (including one from Sheryl Sandberg). This was a facet of Modi that few, if any, had seen in India, where he cultivates a stoniness that can border on the unlovely.

Properly dispositive answers to these questions can only come from the man himself, but one senses that it is only when Modi is outside India—outside the stifling confines of party and sangh—that he has the chance to let his guard down. It’s not as if he disarms himself when abroad; far from it. But it is evident that there are fewer people around him, when he’s outside India, who merit his contempt. Modi is a giant among midgets in his own Indian milieu. His party has its share of upright politicians; but it also has its share of antediluvian retrogrades who are an embarrassment to a modern administration, but who he must carry on his back in the interests of a broad (if misguided) Hindutva coalition.

You don’t see these people abroad. Modi keeps them at home.

But watching him interact with his interlocutors in America, one has to ask when the Prime Minister of India will give his own people the respect that he gives people in Silicon Valley, or New York.

Modi is the networker par excellence. He traces connections between ideas and people, between needs and suppliers, between those who are hungry for approval and himself. In his weekend in Silicon Valley, everyone who mattered put on a jacket and tie, even as he elected to waft by languidly in a waist-coat and open-necked shirt. Satya Nadella, Sundar Pichai, Mark Zuckerberg: all had a most unfamiliar knot around their necks. It’s as if Modi had bound them to his message, and muted them.

Even as his government plays less than fair with freedoms at home, with speech online and with privacy, he faced not one question from the ‘digerati’ on matters awkward or angular. Instead, he was feted as the man who will accompany Silicon Valley to its next level of glory, even as the Valley takes India with it—to heights as yet unforeseen, except in the mind of the man who once sold tea on the sort of railway platform that will soon be kitted out with free WiFi by Google.

Welcome to the ambitions of Modi. Digital man of the world. Digital Hindu. Digital Indian.