Not Selling Themselves Short • All for That Distinct Shade of Red 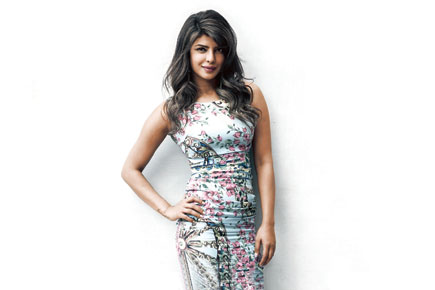 Famously reclusive and deliberately inaccessible, Sanjay Leela Bhansali appears to be making a concentrated effort to change his ways. The Bajirao Mastani director-producer showed up at friend-turned-foe-turned-friend-again Farah Khan’s birthday brunch last weekend where he sportingly posed for selfies with the rest of Farah’s filmi friends.

He also attended a Filmfare Awards ‘Pre Nomination’ party where he bumped into on-off pal Karan Johar just as he was making his way to the event. Photographers had a field day snapping both filmmakers who put on their best smiles as the flashbulbs popped. Bhansali was accompanied by his two-time leading man Ranveer Singh, who, according to the industry grapevine, will work with the director again in his next. Currently waiting for his hair to grow out, Ranveer will dive into Aditya Chopra’s rom-com Befikre in March; that film will be shot at one stretch in Paris. Bhansali, who has said he’s zeroed in on his next movie, has already revealed that he intends it to go on the floors in 2016, so Ranveer could have his follow-up project sorted. But there’s also a good chance Karan Johar and Rohit Shetty want him to play the Anil Kapoor role in their remake of Subhash Ghai’s Ram Lakhan.

If dates between Ram Lakhan and Bhansali’s next end up clashing, it could be a repeat of that awkward scenario from two years ago, where the actor had to drop out of Johar’s Shuddhi so he could do Bajirao with his stubborn mentor who refused to change his shooting dates. With all that history behind them, and the possibility of another flare-up, it’s a miracle Johar and Bhansali could still manage to look civil and even friendly around each other.

Not Selling Themselves Short

The Hollywood buzz is that Priyanka Chopra is ‘in early talks’ to appear in a Baywatch movie that’s based on the popular American TV series about California lifeguards that was a rite of passage for every Indian kid who grew up in the 90s with cable television. If PC does sign, she’ll join Dwayne ‘The Rock’ Johnson and Zac Efron, who’re already attached to the project.

The Hollywood Reporter says: “Scheduling conflicts with the film’s shoot and Chopra’s ABC show [Quantico] still need to be worked out, but the actress would play the story’s villain.”

Even as critics and commentators on social media go into a lather asking why Deepika and Priyanka—both superstars in Bollywood—need to take supporting roles opposite lunkhead stars in mindless American action movies, it might be helpful to consider the fact that it’s these high-adrenaline blockbusters that are Hollywood’s highest grossing exports across the globe. They’re a good way to get noticed, they have franchise potential, and they inevitably beget more work.

All for That Distinct Shade of Red

Studio bosses at one of Bollywood’s most prolific film companies nearly had a coronary when they looked at the expense reports on one of their new films, a prestige picture based on an English literature classic. Turns out that the film, which features a mid-range cast, has cost them more than they’d originally budgeted. But that’s not what drained the colour from their faces.

According to insiders, the producers were horrified to learn that they’ve shelled out roughly Rs 55 lakh on—wait for it—their leading lady’s hair colouring alone. Apparently the actress couldn’t find any professional locally who could give her mane the desired shade of red for the character. So she ended up recruiting a London-based hair colouring expert for the job. This, of course, meant that she needed to zip across to London every few months for a fresh coat… and everyone knows the diva is no budget traveller. She flew First Class, and her accompanying manager, Business Class. Plus five- star hotel accommodation on each trip. All added up, it’s cost the makers a pretty packet, and from what one hears, they’re not thrilled.