The Fragile Future of Egypt

Cries for freedom are welcome, but will Islamist forces allow true democracy in the Arab world? 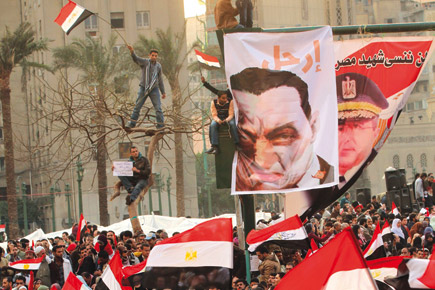 Cries for freedom are welcome, but will Islamist forces allow true democracy in the Arab world?


I am prompted to write this piece after reading ‘The ‘Regime’ They Really Want’ in Open (14 February). The article reports that a majority of Egyptian Muslims said that democracy was preferable to any other form of government. An overwhelming majority also believes Islam’s influence is positive. My question is, what is the meaning here of ‘positive’? Is it congenial for democracy? The past and present do not help an independent, non-partisan thinker answer this question in the affirmative.

I do not want to convey that the present tumult is not worth commending. No, the whole world should welcome it. A person who has clung to his office for 30 years must vacate and make room for a new incumbent. Hosni Mubarak should, with grace, allow someone else to become President of Jamhuria Misr al-Arabia—the Arab Republic of Egypt. Mubarak’s rule has outlived its capacity to be tolerated, much less liked and appreciated. He must go and go immediately. Therein lies his own good. His predecessor Anwar Sadat was assassinated; and if he does not learn appropriate lessons from the history of Islamist politics, God forbid, he too may be in the danger zone of the same fate.

All dictators, whether they come to power through an election, as Mubarak did, or through a coup d’etat, as Musharraf did in Pakistan, rely on the unwavering support of the army. In Egypt, the army has not yet revolted, but indications are evident that the force is sympathetic to the agitators. It is also known that the present anti-Mubarak agitation is led by Nobel Peace Prize winner Mohamed El-Baradei. But it should be borne in mind that the real strength behind the outbreak is that of the Muslim Brotherhood.

That extremist formation, at present, has kept itself in the background. But once Mubarak quits, and it is certain that he will—the question is of ‘when’ not ‘if’—a new election will be held. A presidential election is anyhow due in September, and Mubarak wants to continue till then against the will of Egyptians who are not ready to suffer him anymore.

Even the US, which has been supportive of Mubarak over the past three decades, is insisting that he step down immediately. Haughty though he is, Mubarak appears to be caving in a bit. For the first time, he has appointed a deputy. This gentleman, Omar Suleiman, is also from the armed forces. But the protestors are not impressed. They say such cosmetic changes won’t do. So there is a strong possibility that Mubarak will quit soon.

But the pertinent question is not who after Mubarak, but what after Mubarak? Will the Muslim Brotherhood ensure a truly democratic polity in Egypt? Will there be liberalism, tolerance of dissent, freedom of speech and expression? Will it be a multi-party system? Will it be a secular state in the true sense of that term?

I doubt it. Except Turkey, there is no real democracy in any country with a Muslim majority in the Middle East. There is a vast dreary desert of dictatorships of different hues. Turkey is the only oasis, but even that country is threatened by rising fundamentalist forces.

Yet, there is no doubt that new winds of change are blowing throughout the Arab world. What Tunisia initiated, came to Egypt and is spreading fast and wide. On 27 January, contagion was visible in Yemen. Huge crowds vociferously demanded the resignation of President Ali Abdullah Saleh, who responded by declaring that he would not contest any election hereafter. Then Sudan and Jordan too followed. On 30 January, massive anti-government rallies of students were held in Sudan’s capital Khartoum. Their slogan: ‘We want revolution. We are prepared to die for it.’ In Jordan too, King Abdullah II sensed the people’s mood, and as a first step, replaced his Prime Minister on 1 February. But people are not satisfied. And who is leading this agitation in Jordan? The outfit’s name is Islamic Action Front, a wing of the Muslim Brotherhood. Should we believe these anti-government forces in Egypt and other Arab countries are in favour of a democratic polity? No. They are against the existing set-up because these governments are pro-America. And all extremist Islamist movements, including the Brotherhood, Taliban and Al-Qaida, are anti-America.

Their conviction is that America is anti-Islam and therefore they are against these alleged stooges of the US who rule most of the Muslim-majority states in the region. I fear that the new regimes that may replace the incumbents will be most conservative. They will miss no chance in imposing Sharia. They have no respect for democracy and its norms and values. Therefore, I feel that it is wise to be cautious before painting a rosy picture of the incoming regimes that the turmoil will throw up. Even El-Baradei is likely to find himself helpless. Whatever be the commendable tenets of Islam, it does not favour a plurality of faiths and beliefs, gender equality or freedom of thought and worship.

Have we not witnessed in Pakistan the murder of Punjab Governor Salman Taseer simply because of an innocuous suggestion to change the country’s blasphemy law and the majority of Pakistan so zealously glorifying instead of condemning the murderer?