The Cook, the Chef and the Gender Gap

Let’s assume that skill in the kitchen is gender-neutral. If so, why is a man more likely than a woman to be taken seriously as a chef? It is perception that creates the illusion of a distinction between men and women in the kitchen 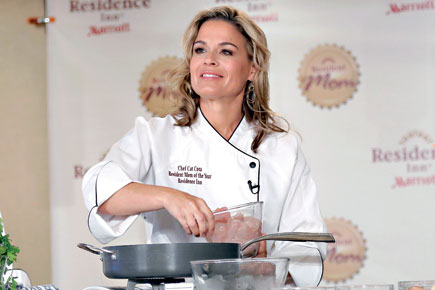 Masterchef Australia: the judges are Gary Mehigan, George Calombaris and Matt Preston. MasterChef US (the earlier seasons): the judges were Gordon Ramsay, Joe Bastianich and Graham Elliot. Hell’s Kitchen: Gordon Ramsay. My Kitchen Rules: Manu and Pete. The Indian versions are no different—Sanjeev Kapoor’s cooking show, filmstar Akshay Kumar as a judge, or Michelin-starred Vikas Khanna’s show. From popular cooking shows, let’s turn to books. In The Soul of a Chef, the author, Michael Ruhlman focuses on Thomas Keller of The French Laundry and Michael Symon. By now, the common denominator must be clear. These celebrity chefs are all men in a domain that is traditionally supposed to be a woman’s fiefdom. Yes, the current season of MasterChef US includes a woman, and Top Chef has two women—Padma Lakshmi and Gail Simmons—and for the first time, Iron Chef America has a female Iron Chef. But these are mere blips. The icing on the cake is the statistic for those who have garnered three Michelin stars, the ultimate accolade for a fine dining chef—a hundred men and six women worldwide!

The blogs and responses from women chefs and those aspiring to be chefs reiterate the stereotype about hulking male cooks with tattoos. So the addition of a negative in the Virginia Slims slogan—‘You have [not] come a long way baby’—is a gloomy reality for women chefs. All the more depressing after reading the equation proposed by Gastronomica. ‘Woman: man’ as ‘cook: chef’. A cook is someone who prepares food, while a chef is the head of the kitchen.

So why are more men prominent as chefs, especially when women spend about 70-90 per cent more time on housework and the kitchen? All sorts of explanations have been proposed—men have more aesthetic skills, have more stamina, are more meticulous and have a finer palate. And debunked. Anthropologist Sherry Ortner argues that virtually every human society either implicitly or explicitly aligns women with nature and men with culture, which undergirds the utilitarian craft (cook) versus the purely aesthetic art (chef) and also explains why more cultural value is accorded to what men do. But in reality, it is not clear if a chef and a cook are so different from each other, except perhaps in the aesthetics of the arrangement of the food on a plate. But if that is the only thing separating the two, it is not clear to me that ‘aesthetics’ is gendered. Men and women can be aesthetes.

Some have proposed the reverse explanation—that it is actually women who have moved into a domain previously reserved for men. For instance, Bhima served as a cook during the Pandavas’ years of exile; King Nala was a fine cook. Even today, the Tamil word for a ‘cook’ for weddings and ritual feasts refers to a male cook.

Let’s assume that skill in the kitchen is gender-neutral. If so, why is a man more likely than a woman to be taken seriously as a chef? I think it is perception that creates the illusion of a distinction between men and women in the kitchen. When cooking acquires a professional patina, men do better because of two reasons. First, like most professions, cooking too is male-dominated. A study by two Texas State University sociologists found that the pressure to conform to the culture of male-dominated professional kitchens was very high for women who had to encourage teamwork while avoiding being labelled ‘bitchy’ if they acted too brusquely, or being a pushover and being characterised as ‘big sisters or mothers’. Then there is the problem of childcare. Chefs work 12-14 hours a day, six days a week, and late into the night, since most fine dining restaurants are only open at night. No paid maternity leave, minimal health benefits, no vacation time, and certainly no retirement plan. It is not surprising therefore, that women tend to leave the professional kitchens after having children unless they have a supportive partner or a strong network. While the study concludes that there is little to separate women from men in terms of skills, leadership qualities and professional drive, it points to sexism as the main cause of the bias.

A related point is the perception that men would think outside the box and create interesting dishes. Research by Lynne Millward and Helen Freeman suggests that while men and women are equally innovative, their gender roles in an organisation can affect two very important aspects of the ideas and thinking they bring to the table. One aspect is how they are perceived by others, and the second is how they approach a problem when innovating and sharing ideas. Men are perceived as more innovative and risk-taking while women are perceived as more adaptive and risk-averse. Innovative and creative solutions and ideas will come from a male manager, while adaptive solutions are more likely to be suggested by a female manager—that is the perception.

The same statement can be made of innovators in haute cuisine. Take the example of molecular gastronomy—the use of science in the preparation of food— whose invention is attributed to Hervé This, a French chemistry professor. In a recent demonstration in New York to a packed house, This showed how to design and create food from pure chemical compounds. He put four tablespoons of water into six tablespoons of powdered egg along with a pinch of allyl isothiocyanate, for a mustardy kick—and produced the taste and smell of a sirloin steak (which he said is 40 per cent water and 60 per cent protein). A side dish of baked potato meant incorporating methional oil, which has a cheesy- potato flavour, into the dough. Ferran Adrià of elBulli (which he closed in 2011) used molecular gastronomy to reinvent Spanish cuisine, while Heston Blumenthal of The Fat Duck did the same for English food.

These innovations are designed to evoke the atmosphere best described by Baudelaire’s famous words: ‘Luxe, calme, et volupté ’. The customer is expected to have a totally blissful, ‘oceanic’ experience—the recreation of memories about food that have special significance in the person’s ‘inner theatre’ and that recall the fusionary experience of the mother feeding the child during the child’s early years. Men are perceived to have an edge in creating such an atmosphere.

But being a chef in a fine dining restaurant does not necessarily require a different set of skills in the kitchen, even if that is the common perception. A degree from a culinary institute, deep knowledge and understandings of flavour pairings, the ability to cook without a recipe, and a professional career are usually cited as the characteristics of a chef. But this boundary between a chef and a cook is not as opaque as it seems. We recently hired a new cook. He has not been to culinary school, but he understands that onions are sweet and therefore a recipe that calls for onions and sugar will need to be modified and only one needs to be used. He can replicate any recipe—south Indian, north Indian, Chinese, French or Italian. He watches cooking shows in his spare time, reads recipes and cookbooks, and experiments with new flavours and techniques in his own kitchen too. And, he can cook without a recipe. Is he a chef or a cook?

The gendered division between chef and cook, male and female, used to be more evident in the cookbooks written in the middle of the 20th century. Rebecca Swenson points out that most of the 13 cookbooks intended for men which were written in America from 1946–60 spoke of how to prepare meat over a roaring fire, demonstrating the natural, cave-like connections between men and barbequed meat. Kitchen shows too had a similar division—female hosts tended to demonstrate cooking as something done for family and friends while shows featuring men as hosts embodied ‘cooking as way to flex professional muscles’ and ‘cooking as leisurely entertainment’. Witness Nigella Lawson’s programme versus Emeril Lagasse performances.

However, the test for a difference between the sexes in the cooking arena lies in whether one can tell if a dish has been made by a man or a woman. At New York’s Astor Center last year, one such test—a six course meal featuring two dishes per course, one cooked by a man and other by a woman—resulted in a resounding failure. The judges could not consistently pick the male or a female-cooked dish. Which brings us to the sad conclusion that centuries of viewing men as chefs and women as cooks is not going to go away quickly.