The Clever Panditji and the Emotional Netaji

Nehru bided his time and came out trumps. Bose rebelled against the mainstream and found himself as an unsuccessful De Gaulle 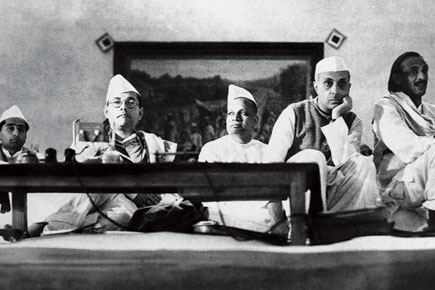 Nehru bided his time and came out trumps. Bose rebelled against the mainstream and found himself as an unsuccessful De Gaulle

It is by now a cardinal rule that wars over India’s history invariably erupt whenever a non-Congress dispensation assumes charge in Delhi. This was first evident during the short-lived Janata Party dispensation after the Emergency; it resurfaced during Atal Behari Vajpayee’s otherwise benign six-year rule; and in the run-up to the advent of the Modi sarkar, it has smuggled itself into the intellectual discourse through an abstruse debate on the Idea of India.

At the heart of the dispute are two pieces of conventional wisdom. The first, nurtured through decades of the Congress’ monopoly over political power, is the belief that the future of India must be shaped through adherence to what is loosely called the ‘Nehruvian consensus.’ By implication, this conviction attaches disproportionate importance to the legacy of India’s first Prime Minister and his contribution to the creation of the post-Independence nation-state. If Mahatma Gandhi is viewed as the ‘Father of the Nation’—the presumption is that India didn’t really exist prior to the Gandhian phase of the national movement— Jawaharlal Nehru is deemed to be the Father of the Republic.

The second belief is that those who opposed the Nehruvian project were either representatives of a feudal order or groups espousing crude xenophobia. In a recent article, Pankaj Mishra went a step further and endorsed a view that after Modi’s electoral victory India’s public life seems dominated by ‘sociopaths and criminally insane persons… whose lust for power poisons the very air we breathe.’ Mishra, of course, inhales the Indian air seasonally, but his intemperate rant is indicative. India’s dominant intellectuals—well ensconced in the social science departments of universities—are willing to seriously debate the critique of Gandhi and Nehru proffered by the Communist movement but they are unwilling to accord respectability to alternatives that were offshoots of more indigenous traditions. Thanks to this policy of intellectual exclusion, Indian conservatism was nurtured after 1947 as a protest movement.

Now that the anti-Nehruvians have found themselves in a parliamentary majority, their ranks replenished by those committed to non-statist economic policies, there is a sudden rush to re-discover and even appropriate political stalwarts whose views were at variance with those of Nehru. The old icons of Hindu nationalism such as Swami Vivekananda, Bal Gangadhar Tilak, Madan Mohan Malaviya and VD Savarkar have been bolstered by the inclusion of the likes of Vallabhbhai Patel, Subhas Chandra Bose and Bhagat Singh. The long-standing complaint that the Congress’ political dominance led to India’s past being seen only through the prism of Gandhi and the Nehru-Gandhi family has been sought to be addressed—to begin with, symbolically.

Rudrangshu Mukherjee’s study of the parallel lives of Nehru and Bose—Nehru and Bose: Parallel Lives—was probably conceived without an eye to the larger political changes that engulfed India in May 2014. For the past two decades, Mukherjee has worn two hats: as the opinions editor of The Telegraph and as a historian. Few have managed to successfully straddle the two divergent worlds of history and contemporary politics. Mukherjee is a rare individual who has— perhaps by maintaining a detachment from the partisan pulls and pressures of ‘breaking news’. As such, despite his disclosure of inherited partiality for Nehru, he has approached the subject with good, old-fashioned empirical rigour, allowing the documentary evidence to do the talking.

The results are heartening. First, Mukherjee has written an eminently readable narrative history that should please both generalists and specialists. It is necessary to emphasise the smooth flow of his prose for the simple reason that India’s historians have recently been disinclined to place any premium on readability. The Marxists, neo-Marxists and post-modernists are most guilty. Together, they have reduced riveting tales of the past to jargon that can at best be understood by a small clutch of those Alan Bloom once described as ‘tenured cretins’. Mukherjee offers a refreshing break from the tendency of modern social scientists to massacre the English language.

Second, this study is focused on two individuals, their mental make-up and the choices they exercised in complex situations. Of course, their actions can’t be separated from the larger historical backdrop, but at least Mukherjee has refrained from delivering pompous sermons on imperialism and the so-called ‘final’ crisis of capitalism that has been upon the world since the time Communist agitators started penning manifestoes and political resolutions. The only criticism that can be made is that Mukherjee is over-reliant on the public speeches and private correspondence of both Nehru and Gandhi. A little more focus on how the two were viewed by contemporaries—and how these varied regionally—may have made the narrative even richer.

What emerges from Mukherjee’s exploration of the parallel lives is the paramount importance of Gandhi in making or breaking political careers. Nehru was fascinated by the mass appeal of the Mahatma and his ability to almost instinctively understand popular impulses and aspirations. Gandhi’s larger worldview, particularly his trenchant disavowal of modernity and Western civilisation, left him unmoved. But he sublimated these doubts cleverly and generously reciprocated Gandhi’s indulgence of him.

Bose, on the other hand, while appreciative of Gandhi’s mass following, viewed the leader as a drag on what he felt should be an uncompromising war against British rule. Influenced in large measure by the emotive anti-British strand among Bengal’s militant nationalists, Bose often overestimated the willingness of Indians to fight a no-holds-barred struggle against imperial rule. However, whereas Gandhi was indulgent towards Nehru’s flirtations with trendy socialist thought, he was less approving of Bose’s desire to develop an alternative radical current. Bose felt that Gandhi deliberately favoured Nehru as a clever ploy to split the radicals and he could never digest the Mahatma’s cunning. His natural impulsiveness led him to write many premature obituaries of Gandhi, something Nehru always refrained from doing despite expressing his private anguish in personal correspondence. In time, Bose began to see Nehru as someone who was willing to shed all beliefs and cosy up to the Mahatma to further his own standing within the Congress. Interestingly, even Patel and Rajendra Prasad—committed followers of the Mahatma with no socialist pretensions—shared these feelings.

In Mukherjee’s study, Nehru comes across as a cleverer politician. In identifying himself with the ‘left wing’ of the Congress, Nehru was very vocal—he even addressed Congress delegates as ‘Comrades’ and was (like most Communists) forever going on about the international crisis of imperialism. Bose, on the other hand, devoted as much energy to faction fights within the Bengal Congress as he did to positioning himself as an intransigent, pan-Indian, anti-imperialist. Despite radical posturing, he was quite firmly rooted to the regional base of the Congress. Indeed, Malcolm Muggeridge, employed as a leader writer in The Statesman in Calcutta, remarked on the curious mismatch between the radical pretensions of the anglicised Bengali Congressmen and their social preferences. ‘Our parts in history are allotted, not chosen,’ he wrote, ‘and their belonged to the Raj, which they hated, rather than to the Swaraj, whose coming to pass they sought.’ The same, arguably, could have been said of Nehru with one difference: Nehru never developed local roots. The Cambridge historian argued that Bengal’s Congress leaders that included the Bose brothers, Sarat and Subhas, could never transcend their social status and were victims of it. It is doubtful if he would have extended the argument to Allahabad’s Jawaharlal. Nehru was the epitome of the deracinated and, ironically, this has come to be celebrated by Nehruvians as a virtue. Whatever rootedness he possessed was courtesy his status as Gandhi’s favourite son.

In hindsight, the simmering Nehru- Bose tensions have come to be located in Nehru’s distaste for Bose’s soft corner for the fascist regimes in Europe. It is true that Bose believed that Germany (and, subsequently, Japan) was India’s natural ally against the British Empire. It is also likely that Bose’s relationship with the Austrian Emilie Schenkl may have blinded him to the jagged edges of Hitler’s regime. However, in hoping for a confused synthesis between Communism and Fascism, Bose was merely articulating contemporary concerns. Nehru may have embraced Stalin’s Soviet Union uncritically—as many of his upper-class English contemporaries did. However, rather than view Bose as a closet fascist, it may be more instructive to view him among the many leaders from Europe and Asia who sincerely believed that the Axis powers were going to create a more equitable world order. It is worth remembering that the horrors of Hitler’s ‘Final Solution’ were not widely known until the end of World War II in 1945. Bose’s my-enemy’s-enemy-is-my-friend approach was characteristic of his desire to put emotion above calculation.

In sum, Mukherjee’s study reveals that both Bose and Nehru were out of tune with the main body of Congress thinking that was personified by Gandhi’s gradualism. Perhaps it is because the battle against British rule was not totally uninhibited that India survived as a democracy after 1947. Bose rebelled against the mainstream and found himself as an unsuccessful De Gaulle in Japan. Nehru merely bided his time and came out trumps. However, once the checks were removed after the deaths of Gandhi and Patel and the marginalisation of Prasad, Nehru’s confusions became India’s long-standing national consensus.