The Case for Evicting Ganpati

If God is everywhere, he doesn’t need to be on the streets 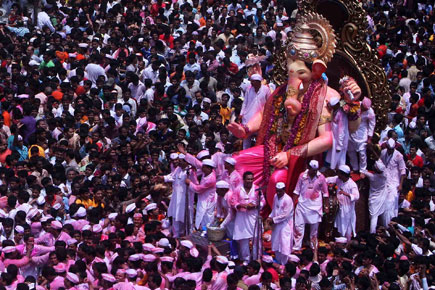 You can’t really debate the existence of religion, and, indeed, science has come around to the point of view that it is wired into our brains. But that still does not make it real. The foundation on which religion stands is a massive superstition, which, because enough people believe it to be true, holds the rest of mankind hostage. Not even the greatest of believers will jump off a seven-storey building expecting the soft hands of God to catch him, but, so long as there is no real test of that faith, they will continue to preach that those astral hands are everywhere. It’s bunkum but it is powerful bunkum.

The broad trajectory of human thought in modern times is to see religion as a personal indulgence. There was a time in India when temples were the treasurers of the state, but no one really wants the RBI to turn over its responsibility to the Tirupati Devasthanam. Like the believer who won’t jump because he instinctively knows that God is a non-entity—or, even if he exists, doesn’t really care about saving him—society keeps religion at a distance on serious issues. But on everything else, it pokes its nose in with success. Two recent instances highlight this.

The first is the Bombay High Court order that pandals during the Ganpati festival that come up in September must not block traffic or footpaths. This will affect some of the biggest pandals in the city and they all have the patronage of politicians. The Brihanmumbai Municipal Corporation, the civic body that has to implement the order, has more or less flatly refused to do it, trying to wriggle out of it by promising to look into the matter next year.

The second instance is India’s Environment Minister Prakash Javadekar saying that he will try to revoke the ban on the use of animals in the religious practice of jallikattu, a form of bull taming by a crowd celebrated during the festival of Pongal. Why would anyone want to undo a ban? Obviously because when a politician sees a baying crowd, he sees a vote bank and uses the logic that a little bit of cruelty is fine so long as it is an animal that has to endure it. They (or at least most politicians) wouldn’t apply the same argument if cruelty to human beings were involved, but the principle—that wanton cruelty for entertainment is wrong—does not change.

Religion is a delusion but it is a good one to exploit. The Shiv Sena, which controls the BMC and is a junior partner in the Maharashtra government, has said that the party will oppose the court’s order because it is a public festival. Actually, it is not. If it were, then everyone should have an equal right to put up a pandal in the middle of a road. And they should have that right for every festival for every minor and major god of every religion.

What is more or less certain is that for the moment at least, the pandals will remain. The state will see to it even if it is on the wrong side of history. Victories against obscurantism are hard won, but they are inevitable. Otherwise we would be still be clapping whenever a widow commits Sati.