The Amateur’s Day Out

India today is not the ideal place for a revolution, no matter what hallucinations propel Arvind Kejriwal. 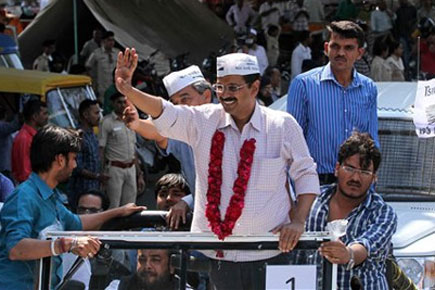 India today is not the ideal place for a revolution, no matter what hallucinations propel Arvind Kejriwal.

There can’t be a second opinion on this: In India of the moment, politics is too serious a matter to be left to professional politicians alone. Some time ago, the Marxist pundit Martin Jacques famously wrote about the end of politics. He was, to some extent, following the market trend of ‘Endology’: after the End of Ideology and the End of History, the Death of Politics was inevitable. Like the demise of its great predecessors, the End of Politics, too, was a false alarm. We saw, in the post-Soviet world of triumphant market liberalism, history returning with a vengeance to the streets of the Balkans and elsewhere, and it was such an awesome sight that the original obituary writer from Rand Corporation in the US had to rewrite his argument. And of politics, it is the one thing that makes a difference to our destiny, for better or worse. For the worse, in the most hypersensitive democracy.

If India today is one of the most misgoverned nations in the world, it is a reflection of the worth of our political class. There was a time when the so-called banana republics were the only addresses of kleptocrats in power—the bloated liberators-turned-rogues. They are here now. The Indian story, particularly of the last ten years, is a textbook case of how the freedom that democracy offers to the elected politician can be turned into a mandate for pillage. The worst stereotypes of politics are at play here: a prime minister whose sensory faculties are conveniently switched off as scams and scandals swirl around him; a cabinet whose moral deficiency is so acute that that national interest has already ceased to be its concern; and the condemned and the discredited in public consciousness have a safe house in South Block. The irony of it all is that the rise of the devalued politician paralleled the fall of the accidental politician as prime minister.

The stage was set for redeeming politics from its professional practitioners. And it is wonderful to see in this election ‘smart’ people as candidates, among them journalists and high-profile technocrats. The sight is all the more heartening because politics in India is generally incompatible with merit. The new entrant into politics is invariably a beneficiary of hereditary entitlement. Most of our young MPs, in their thirties or below, are there in the House courtesy of their bloodline. And that is one reason why the new generation in Indian politics is old in its thinking; it is a generation that is preordained to carry forward the ancestral legacy. That is why, to cite just one example, Akhilesh Yadav is as good or as bad as his father. The young in Indian politics are not swayed by the romance of change; they don’t challenge the existing order; they are not children of idealism but purveyors of redundant ideologies.

That is why we need the outsider—the amateur. Remember, it was in a theatre called Magic Lantern that the first draft of the Velvet Revolution—the most poetic moment in Eastern Europe’s liberation struggle against communism— was written, and it was a revolution led by playwrights and novelists and rock singers. That said, India today is not the ideal place for a revolution, no matter what hallucinations propel Arvind Kejriwal. But it is certainly not the ideal address of democracy. It is a place that has become the worst case of mismanaged democracy. Just think of it: Manmohan Singh, once the wisest old man from the East feted at the highest tables of international summitry, is currently presiding over a regime that has made India one of the most talked-about nations today—and for all the wrong reasons. The bestselling Indian story is about how to be corrupt and remain in power, and this story is made possible by a prime minister who could have been different from your average Congress leader—or any other professional politician. The failure of Manmohan Singh brings out the larger failure of the apolitical politician in India.

Still, does the amateur on the stump mean a cultural shift in politics? The Aam Aadmi Party is the obvious magnetic field to which the newly awakened are attracted. The only good thing about this trend is that being political is no longer a state of passivity. Suddenly, the good citizen is out there on the street, talking India and fighting for it. The only problem is that the India of the amateur in the fray is either a regressive alternative or just a variation of the present. The ‘change’ the AAP revolutionary talks about is the retro-terror of an India as a mofussil autocracy. Elsewhere, new entrants may not be as ambitious as their AAP counterparts, but, going by their words, they are more status quoists than tradition breakers. Up close, the amateur in this election is too familiar to be different.