THE AGE OF DHONI 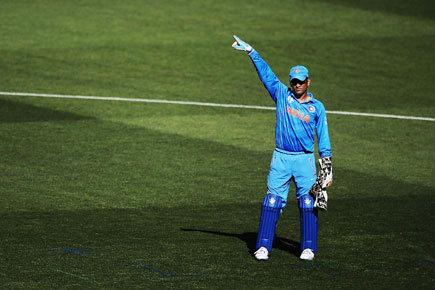 Here’s the claim. To hold the World Cup trophy is not essential for a cricketer to tick off all the boxes to be counted among the greats, even as a One-Day player. But more than any other tournament or series across formats and geographies, the title comes to be intimately associated with the winning team’s captain.

In Mahendra Singh Dhoni’s remarkable career, in fact, the World Cup may count for more than it has in any other cricketer’s. He came to the 2015 Cup having just announced his retirement from Test cricket before the end of the Australia series to focus exclusively on ODIs and Twenty20. It was typical Dhoni, no fuss, no supplementary questions taken, let’s move on to the next item on the agenda, please, time’s not for wasting. It was, alas, also about time. He was tiring of the long arc of the five- day game. On his watch, India had transformed into the Test success that Ganguly’s earlier captaincy and the maturing of the Fab Five (they were part of the Dhoni period, for just a while Ganguly himself, and as they played out their last days, Kumble, Laxman, Dravid and Tendulkar) had promised. Dhoni’s team made a habit of winning home and away, and for over a year were ranked the world’s No 1 Test team. Until the summer of 2011 and a miserable series in England, that is, and Dhoni lost what had been a visible command of proceedings.

Eventually, as the end came to pass this past season, it was Virat Kohli, standing in as captain for an injured Dhoni for the opening Tests of the four-match series in Australia, who showed what was missing. At Adelaide, Kohli’s India gave spirited chase to a fifth-day target of 364 runs, privileging spunk over caution. The Test, do recall, had been postponed and began somberly after the accidental death on the field in a domestic match of Phil Hughes; before cricket returned to its present mode, for a few days there was hushed anxiety that cricket may struggle to survive this tragedy.

So Kohli’s sportsmanship, honest pursuit of victory even if it brought defeat, as it eventually did by 48 runs, was apt in more ways than a personal statement of leadership style. When Dhoni eventually saw out the series with his retirement, it appeared inevitable.

It ended Dhoni’s second, duller phase as Test captain. In a three-Test series in the West Indies in 2011 following India’s World Cup victory at home, he deliberately chose to forgo a chance to force a victory in the last game in Dominica. At 94 for 3, chasing 180, and with Dravid and Laxman out there, Dhoni and Kohli yet to bat, they took the safety of a draw instead of trying to get the remaining 86 runs in 15 overs. Thus, they took the series 1-0, and presumably saved their energy for the England tour. As it turned out, England had the better of India that summer.

India have to figure out their bowling resources as they chart their Test campaign post-Dhoni. India’s most successful Test captain, he had delivered big moments, drawing a series in South Africa, winning in England (before the defeats of 2011 and 2014) and New Zealand, for instance. Can India now take it a step forward by determining the milestones of their Test evolution following Ganguly’s and Dhoni’s captaincy? Can they settle for a new life after the calm Dhoni brought?

Dhoni’s famed equilibrium has already acquired mythical status, and how he handles a successful or dashed 2015 World Cup campaign will be telling. It will have a bearing on Kohli’s succession. It will also, importantly, set the tone for how the Age of Dhoni will be analysed, even interrogated.

It was beyond Dhoni’s control that his career—or, to be precise, his captaincy—overlapped with a greatly transformative phase in cricket. But it was his personality that made him a pivot of calm adjustment in what could have been a very disruptive, often anxious and sometimes overly heady time. I’d say that for all the indifference he sometimes betrayed and his episodic refusal to join debates on developments on and off the field, Dhoni alone stood between despair and optimism that the game would go on. He did so by keeping cricket, especially the 50 and 20-overs games, exciting, edgy and attractive— and he did it by wearing his responsibility so effortlessly, turning out for the occasion as it demanded, in control.

Looking back, it was as if Dhoni was wired for the changes that swept cricket, for the times cricket took even itself by surprise. He had the game, a mix of unorthodox and cricketing shots, stamina and attentiveness for keeping in an age of great wicketkeeper-batsmen, ability to firmly assert his authority on the field and in the dressing room with the lightest touch to mark him as an all-time great. But transcending all that, Dhoni also became the man to define his times, for all the good (India’s dominance at one point in all three formats and also their commercial, broadcast and IPL leverage) and the tricky stuff (the IPL conflicts of interest that led to his being questioned by the Justice Mudgal Committee and which are still to be resolved). Understand Dhoni and you understand cricket today. Or perhaps, given Dhoni’s inscrutability, understand cricket and you get a sense of what Dhoni is about. Both options are easier posed than solved.

By way of a light example, recall this from the World T20 tournament in South Africa in 2007, by the end of which India were in love with the abbreviated format, and, well, cricket was not to be the same again. There came a point early in the hosts’ chase against India’s when Dhoni took off his gloves and put Dinesh Karthik behind the stumps. The veterans in the commentary box pounced on it as a talking point. What was going on, they wondered. Was Dhoni keeping himself as a bowling option? Or did he figure he would get a better look at the field, in this mysterious new thing called Twenty20, this way, instead of behind the stumps? I kid you not, all of us, cricket experts and casual spectators alike, did not know what to make of this attraction called Twenty20. Turned out Dhoni had back pain, and with another keeper in the playing eleven, he had the luxury of giving himself a break, something we would have instantly grasped if he’d done this in an ODI or a Test. India went on to win that cup, within a year the country had the IPL, Dhoni became Chennai’s iconic player, IPL changed all of cricket’s equations, and Dhoni became the IPL’s most favoured participant—for his association, some would gossip, with N Srinivasan’s Chennai Super Kings, but also unarguably for the cricket he played.

Right now, the context is the World Cup, and Dhoni has really not much to prove. He won it at home in 2011, playing a captain’s innings in the final against Sri Lanka, by backing himself to bat ahead of Yuvraj Singh and hitting the winning runs, so that an anthology of reports on the tournament would be titled Sealed With a Six. And then carrying his captaincy so lightly, he stepped back to let the team make a big fuss over Tendulkar. (It was yet another reminder of Dhoni’s unclenched fist— in a character-revealing gesture, he had asked Ganguly to take charge in the last overs of his farewell Test.)

The Cup’s been India’s and his, but his fans back home are too easily primed to expect victory in return for their interest, for hasn’t it become an unstated assumption that come time for an ICC tournament, Dhoni will up his game?

Who knows whether the boy from Ranchi, who strayed into cricket from football, who could not have known for sure that the sport would take him far out of his orbit as a railway ticket collector, had a prescient sense of being destiny’s chosen one. Whether he had to will himself to carry success and leadership so lightly. Whether he had to inhale enough calm to fight insecurity, or that’s just the way he’s forever been, as instinctively well-mannered and centred as he is stylish. Who knows whether he worries about where cricket is headed, one day Pakistani players going ‘unsold’ in an IPL auction and another day Sri Lankans barred from matches in Chennai, the rapid rush of matches making acclimatisation overseas ever more difficult, the contexts of bilateral tours no longer so defining. Who knows if the memory of his home being attacked after India’s shock exit from the 2007 World Cup informs his non-engaging chatter at mandated pre- and post-match press conferences, never intemperate and always guarded. Who knows how keenly he sees the squeeze on his personal time, with his agent reported to be seeking brand endorsements that don’t require Dhoni’s actual presence, mirrored in the Indian team’s tight calendar, with every other team jostling for a chance to play them.

The opening stages of the World Cup have corrected the balance back in favour of Dhoni and team after a season of losses in Australia. Will the end of the tournament or India’s campaign, as the case may be, draw out Dhoni in a freewheeling conversation? Does he yet have a surprise up his sleeve?