Take the Blame for Babri Demolition 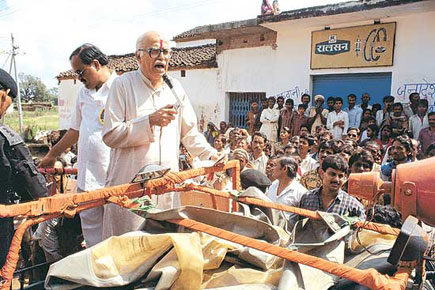 
The Rama temple at Ayodhya has become a certainty. Though it is imprudent to subject the ultimate judgment of the Supreme Court to conjecture, I can say with confidence that no power on earth can stop the construction. The verdict has pleased all of Nationalist India, which includes people of all faiths and persuasions. There will be some who will feel sorry and dejected. Most of them would be the progeny of those who had voted for the vivisection of our motherland in 1946. There will also be some who don’t believe in the concept of nationhood. Their ideal was to unite ‘the workers of the whole world’; though this slogan has proved to be a chimera, certain fantasies linger on.

So, the Allahabad High Court verdict was welcomed by a vast majority. Congressmen must be at the forefront of those who are elated because it is they who started the process. Everybody knows the idol of Rama was installed in the so-called mosque on the night of 22-23 December 1949. Who did it? The VHP? It was not even born then. The BJP, or its former ‘avatar’, the Jan Sangh? Neither was in existence. The RSS? No! It had just emerged from the trauma of the first ban imposed on it in 1948. It was the Congress that was at the helm both at the Centre and state.

Why was the Rama idol installed only in this structure and not in any other mosque or dargah of Ayodhya? The reason is simple. It was the firm belief of people that it was at this spot that an ancient temple was demolished in the early 16th century by a foreign invader. In 1986, the Faizabad District Court ordered the removal of locks at the structure and allowed free entrance to devotees. In 1989, Home Minister Buta Singh allowed the laying of a foundation stone. To which party did he belong? And what does laying a foundation stone imply? Does it not connote that a Rama temple is to be built on that site? Is it not a fact that the then UP government declared the shilanyas spot an undisputed site? This ceremony took place on 9 November 1989 with Rajiv Gandhi as India’s Prime Minister.

The BJP came into the picture only later. On 25 September 1990, LK Advani began his Rath Yatra from Somnath. Why from here? The reason is obvious. Ayodhya was analogous to Somnath. An ancient temple was demolished and a mosque built at Somnath as well. The first thing the new Government of Independent India undertook was the restoration of the glory of Somnath.

It will not be a mistake to presume that Advani’s Rath Yatra was aimed at the construction of the Rama temple. How could the temple have come up unless the Babri structure was removed? It is true that there was no plan to demolish the structure on 6 December 1992. How it was demolished, who planned it, who removed the idol, who put up the temporary temple, are questions that are a mystery even today. But they are irrelevant now. If it is proven that leaders of the VHP, RSS and BJP had provoked people to demolish that structure, they should agree to accept punishment for the alleged offence. It will in the end do them good. It will enhance their prestige and popularity.

One more point. Had the structure not been demolished, how could the ASI have conducted excavations? How could the remnants of a religious structure been dug out? It is the ASI’s factual evidence that must have convinced the High Court judges of a temple’s existence.

It is not simply a question of faith. It is a historical fact. Did not Muslim conquerors, whether in Spain or Serbia, destroy the religious centres of people of other faiths to construct mosques? Why should Babar be an exception? What, after all, was the size of the Muslim population in Ayodhya in the early 16th century? How is it that no other mosque in Faizabad or Ayodhya uses any part of ‘ruined Hindu temples’? Why should an intolerant invader like Babar be an icon of Muslim identity in India?

It is alleged that the court relied more on faith and less on history. One learned lawyer even questioned the historicity of Rama. I know that there are quite a few learned ignoramuses. The learned lawyer is unable to distinguish between history and mythology. The ancient words for these two types of works are ‘itihasa’ and ‘purana’ respectively. The Ramayan of Valmiki is a historical epic. It is in poetic form, and so there are certain literary embellishments in its language, but does it therefore mean that Rama is not a historical figure?

Shakespeare wrote dramas on English kings named Henry. There may be some exaggeration, but does that mean they never existed? No. Rama is history. He is a symbol of our cultural value system. Therefore, he is our national hero. To say that our nation came into existence on 15 August 1947 is to confuse the difference between the concepts of ‘nation’ and ‘state’. In short, the construction of a Rama temple at Ayodhya is our national duty. We should be happy that a symbol of religious vandalism is removed; 6 December 1992 cannot be a ‘saddest day’ in the life of any true nationalist.