On man reaching Pluto and the journeys beyond 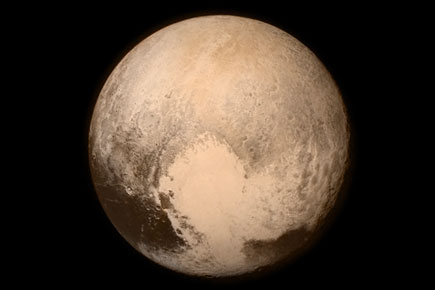 A year in Pluto, that is the time it takes to go around the sun, is 248 earth years, and by that measure New Horizons, the spacecraft that set off towards it in 2006, reached pretty fast—in under a Pluto month. But by the time it finally arrived, the planet was no more. Or, at least, scientists had agreed that Pluto couldn’t be called one.

New Horizons has now come closest it will to the planetoid—12,000 km. That might still sound far, but compare that to how much it has actually travelled: about 4.8 billion km.

No matter what the faults of our species are, man has done extraordinarily in exploration right from the time the climate got amenable enough for him to move out of Africa and colonise the planet. From then to space travel is a journey that is 100,000 years old, but the farthest leaps began only half a century ago when we finally got off the planet. Touching Pluto ranks along with landing on the moon and Mars because man’s footprint is now at the very edge of the solar system.

We really have no idea what these space journeys will culminate in. We can imagine the possibility of life elsewhere, but, even if it exists, any encounter seems impossible because the universe is just too big— specks of matter separated by vast amounts of infinite space.

It took nine years to reach Pluto. Any planet beyond that is in another solar system, the nearest one being a 100 trillion km away. You just can’t reach it with the current technology but it is still not impossible.

If 1,000 years ago, someone had suggested that one day giant machines would fly people from one end of the earth to the other in the sky, they would have labelled him a lunatic (or a poet). A 100 years ago, who would have believed a man who looked through a telescope beyond the points of light and said that one day we could send something into that blackness and capture it in images?

Where man’s imagination can go, man will follow, often charting the seas as he goes along. We weren’t designed to ride bicycles, drive cars, sit on inter-continental flights or camp in a space station. But, one by one, incrementally, all these have come to pass.

One of the things that limit space flight for human beings is the body itself. You can’t make a 100-year journey if you live only for 80 years. But science fiction writers have already imagined ways around it. Arthur C Clarke, for instance, wrote about a civilisation which first transferred their consciousness onto machines and then evolved further to doing away with that too. If we are not limited by the body, then we are not limited by time.

In recent times, while governments have been ambivalent of taking on the enormous expense necessary for manned space flights, a private organisation is planning one to Mars. Its idea of holding a reality show of potential contestants to raise funds for it might seem far-fetched, but you can see in its venture the never-ending ambition of man. Pluto was far, but man is only beginning.