Sir Vidia and the Islamic Reich 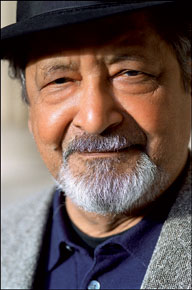 There is a terrifying clarity—the ruthlessness of truth—about the vintage Naipaul. Whenever he made an appearance as a traveller in ‘the bush’ or other places vandalised by the ideas and idiosyncrasies of power, be it of the coloniser or the colonised, literature gained a rare, refined sensibility. As he used to say, he abhorred abstractions. With a notepad in his hand and curiosity in his eyes, he listened to voices that carried within them personalised summaries of a merciless past, as if stories were waiting to be salvaged by his stylus. He listened to the whispers and sighs of lives trapped in the so-called ‘half-made’ societies—in Africa, in Asia and in Latin America. Naipaul as a wayfarer was a conversationalist, bringing out the perversions and pathologies, of helplessness and even dreamlessness, of countries that missed the calming touch of justice. As traveller, memoirist and novelist, Naipaul was one writer for whom what he experienced was as essential as what he imagined—and he was never afraid of saying what he saw, in a language that was chiselled to perfection. And journalism was rarely the medium he chose to tell the truth.

So the article in London’s Mail on Sunday, on the Islamic State, was a kind of event. That was partly because, apart from his occasional forays into literary festivals (lately in Jaipur), he was mostly silent, spending his time between Wiltshire, London and Delhi. His off page interventions were invariably controversial, whether it was about the novel or about Pakistan or about Tony Blair or about English literature. He saw the demise of the novel before he himself returned to the form after a long gap (Half a Life), and what he said in a reading session of the book angered the liberals in London and elsewhere: “The story of Pakistan is a terror story actually. It started with a poet who believed that Muslims were so highly evolved that they should have a special place in India for themselves.” And on Islam he said: “It has had a calamitous effect on converted people.” The storm those comments created was surprising: he was only repeating, in media-friendly soundbites, what he had written at book length. Both Among the Believers and Beyond Belief were conversations with the converted, and their accumulated destinies were stories of Islam’s imperial temptations. In the countries he visited—Indonesia, Iran, Pakistan and Malaysia—he sought individual life stories to portray the extraterritorial ambition of an Arab religion. This is how he concluded his Pakistan chapter in Beyond Belief: ‘In its short life Iqbal’s religious state, still half serf, still profoundly uneducated, mangling history in its school books as well, undoing the polity it was meant to serve, had shown itself dedicated only to the idea of cultural desert here, with glory—of every kind—elsewhere.’ As he said, “Poets should not lead their people to hell.”

So when Sir Vidia talks about Islam—or more correctly its political and cultural manifestations—it carries the legitimacy of a writer’s engagement with an idea that touched the lives of a vast section of humanity, mostly for the worse in his view. In Mail on Sunday he wrote: ‘Isis is dedicated to a contemporary Holocaust. It has pledged itself to the murder of Shias, Jews, Christians, Copts, Yazidis and anyone it can, however fancifully, accuse of being a spy. It has wiped out the civilian populations of whole regions and towns. Isis could very credibly abandon the label of Caliphate and call itself the Fourth Reich…There is even the same self-regarding love of symbolism, presentation and propaganda; terror is spread to millions through films and videos created to professional standards of which Goebbels would have been proud.’ Even though, in style, this is Sir Vidia as op-ed pundit, his analogy to stress the horror against which there is still not a coalition of the civilised in sight is apt. And this Naipaulian intervention comes at a time when the world badly misses the kind of leadership in the West that stood up to the Führer. The current leader of the free world, from Cairo to Tehran to Damascus, has lost history already.

The Islamic State, sadly, doesn’t concentrate the mind of public intellectuals either, as it should have. The Caliphate of Fear may have, with its beheading chic and techno-jihad, attracted volunteers, from the West and elsewhere, swayed by the prospect of a revolutionary romance in the desert. It has not become the Fourth Reich or the site of another Holocaust for the intellectuals—no Edward Said writing polemics against the imperium of the faith, not even a Christopher Hitchens. For the usual suspects from the left-liberal side of the argument, radical Islamism is a form of cultural politics—if not some kind of cultural exceptionalism—which is not comparable with other expressions of terror or hate. And it is the biggest intellectual cop-out of our time. Sir Vidia is not restricted by the imperatives of ideologies or the correctness of any kind, political or cultural. It is the sight of man trapped in history—and his gift to turn it into stories—that has made him a writer whose words, as Kafka would have said, break the ‘sea frozen inside’ all of us.