How do you make a new story every time out of a problem that just won’t go away? 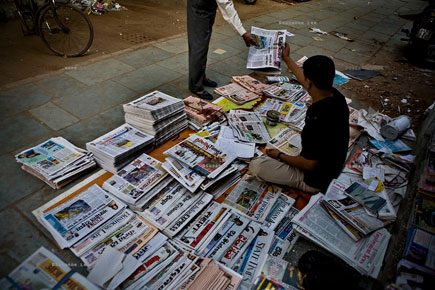 How do you make a new story every time out of a problem that just won’t go away?


TL, a young colleague who writes for a daily in north India, was in touch the other day through Facebook (God bless Facebook). She has been trying to come up with an original way to cover the frequent rapes and the misogynist attitude of police in the National Capital Region (NCR) “and everywhere else”. Her editor has refused, saying it has been “done to death”. “But everything is still the same,” she told him. “Sorry, the story is old,” was the reply. TL feels a deep need to add her voice for change (‘the reason I became a journalist,’ she writes), and asked if I might have an idea on how to report one of the oldest stories in the world.

This takes me back 25 years, to when I took part in the birth of the first rape crises centre in Tel Aviv. We’d had enough. It was clear the police were never going to change their blame-the-victim attitude; that left to themselves, they would never change the abrasive, intimidating, humiliating protocols they invoked when it came to crimes involving ‘sex’. Police officers, politicians, judges, all voiced this well-worn opinion: it’s the women themselves who ask for it, and therefore deserve what they get. We were fed up, and started an awareness-raising campaign called ‘You Are Not Alone’.

I was a radio journalist and a columnist of feminist affairs (a pioneering venture at the time). I asked many women, some VIPs and celebrities among them, to share their experiences. Everyone had a story—about the guy on the bus or movie theatre; their boss, army commander, professor; their uncle, brother-in-law, father. Some did come out and speak on air, but many more stayed quiet, ashamed. For all my pioneering spunk, I was part of the latter lot.

If I’d had the nerve, this (of many such) is the story I might have told. Once when I was relatively junior, I did a late night radio interview with G, a superstar journalist, bohemian, radical leftwinger, cool guy. I had admired him immensely, for years. After the show, he and S, a friend of his, pulled out a bottle of cheap cognac and we drank and smoked right there in the studio. I was thrilled, obviously, and so glad I had worn my Mao hat and Nicaraguan hoop earrings. It must have been 3 am by the time S drove us all home. When we stopped to drop off G, he insisted I come in to see how great his house was, “just for a sec”, while S stayed in the car. The moment I walked in, he locked the door, pinned me to it, yelled out to S to drive away, and started sending his hands everywhere. I was trying to break free. He was surprisingly strong. I was really scared. I was yelling to S “Don’t go! Don’t go!” and G was yelling “Go! F—k off now!” Finally, I kneed him, opened the door, and ran to the car. “Thanks,” I said, trying to catch my breath. G drove a few blocks, to where there were no houses or streetlights, stopped the car, and jumped on me, my head banging on the window. When I managed to push him off and get out of the car, I realised I would have to walk 7 km through a very dark Jerusalem. I agreed to let him drive me home, my hand tight on the door handle. I stayed in bed for three days, small, ashamed.

Three years later, I received a journalism award for my ‘work to improve the lives of women’. The new spokesperson for the awarding (feminist) organisation called to give me the news and congratulate me. He introduced himself. It was S. I reminded him of that night. Silence. “So that was you,” he finally said. “Yup,” I answered. I fantasised about outing him at the award ceremony, but did not.

(I just learnt while writing this piece that S, a leftist and sympathiser of the Palestinian cause, was shot and killed several years ago by Palestinians during a terror attack. Should I hold my peace? What is the equation here? I am lost. I’ve changed his initials to deepen his anonymity, and send my prayers to his family.)

Twenty-five years later, what started as a noisy ‘You Are Not Alone’ campaign, has led to profound improvements in protocol and attitudes to this issue—the conviction and imprisonment of the country’s ex-president on charges of rape and sexual harassment not the least of them. Stick with it, I told TL. This is our news, old or new, and we can tell it any way we want.