Return of the Great Terror

No autocrat as sanguineous as Vladimir Vladimirovich Putin is at work today, and it’s nostalgia that drives his extraterritorial ambition. 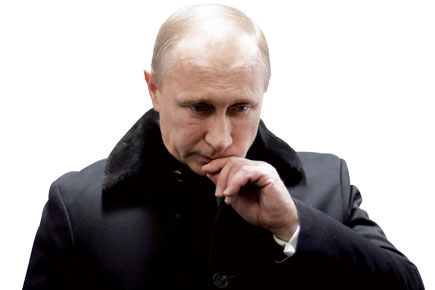 No autocrat as sanguineous as Vladimir Vladimirovich Putin is at work today, and it’s nostalgia that drives his extraterritorial ambition.


Nostalgia is the most powerful weapon in the armoury of an autocrat. No autocrat as sanguineous as Vladimir Vladimirovich Putin is at work today, and it’s nostalgia that drives his extraterritorial ambition. They may not have given a name to the uprising in Ukraine yet—it was Orange Revolution earlier—but we may still be able to name the power that stifles freedom. The Great Terror of Stalinist vintage is back, and leading it from the front is a former KGB official, who, it seems, carries within him the spirit of Felix Dzerzhinsky, father of the Soviet secret service, originally called Cheka. When the Soviet Imperium fell, among the smashed icons in the wreckage were the granite remains of Iron Felix. Putin, a child of the KGB, is the so-called strong leader powered by the memories of yesterday. In his worldview, today’s turmoil—what others may call a freedom struggle—is the manifestation of the lost glory, of a moral dark hole. The Independence Square in Kiev is its newest address. The idyll of the Empire, still alive in the mind of the strong leader, has been shattered once again.

So Putin’s reaction is predictably commissar- like. The uprising in Ukraine for him is not a democratic movement. It can’t be, because ‘democratic’ rhymes with ‘Western’; it is a repudiation of the all-powerful Centre. These excerpts from his first press conference after the conflict opens a window to his mind: “This was an anti-constitutional takeover, an armed seizure of power… One should not support illegal change.” For Putin, the deposed president, Viktor Yanukovich, an obedient servant of Moscow, is still the legitimate ruler of Ukraine. And Putin’s soldiers are reportedly at the gates of Crimea, where Russia’s strategic stakes are high. This is a warning that Moscow will go to any extent to maintain ‘legality’ in its near abroad, and Ukraine, a country whose soul is European, is a wayward state of freedom. Putin hates waywardness.

All ‘strong’ leaders do. Putin’s back story is the evolution of an autocrat, a leader of manufactured order. His rise is a paradoxical saga: a president born out of the ruins of the Soviet Empire, he used the post-communist freedom to build his own cult of the new Tsar. If Mikhail Gorbachev was, as a cartoonist then famously immortalised, the Mikhailangelo of Soviet Communism who fell along with the empire he humanised; if Boris Yeltsin, the first ruler of freedom, was incapable of managing the freedom; then Putin was the stabiliser. His first days in power were all about recreating himself as the Leader above other elected regional leaders, and larger than the institutions of a still nascent civil society. At the heart of his mission was a sense of loss and humiliation. The reality of a downsized power was not something that he—the one who came from the dark recesses of the empire—could live with. Russia was no longer the other side of global power; and freedom was turning immoral. Putin became the course corrector, a job that required extra-constitutional powers.

This fantasy of greatness—of Russian exceptionalism— has a worthier pedigree. In his manifesto for post-Soviet Russia, Alexander Solzhenitsyn, a self-confessed half-Ukrainian by birth, just before his historic homecoming, wrote: ‘European democracy was originally imbued with a sense of Christian responsibility and self-discipline, but these spiritual principles have been gradually losing their force. Spiritual independence is being pressured on all sides by the dictatorship of self-satisfied vulgarity, of the latest fads, and of group interests. We embark on democracy at a time when it is not at its healthiest.’ Solzhenitsyn, let down by the sham glasnost and mounting immorality, yearned for a Greater Russia with a Slavic soul. Democracy was certainly not the route to the ‘spiritual and physical salvation’ of the people.

The president of Russia would love that passage. Putin in action is a blend of Biblical moralism and Stalinist terror, and it is quite natural that he is the benefactor of such rogue regimes as Syria. On the ruins of the Soviet Union, Putin is building his own imperium, and in Russian history, empire-building is a bloody affair. The bad news from Maidan in Kiev only aggravates the bloodlust of the autocrat.