It is hard to forget those who think they can get away with the very worst that humans are capable of. 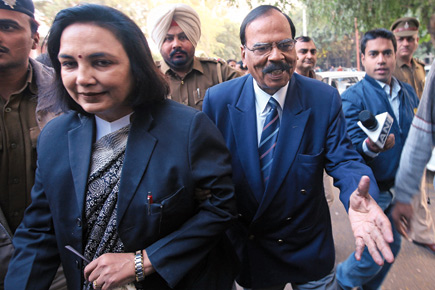 It is hard to forget those who think they can get away with the very worst that humans are capable of.


By now, most of us would have heard the news of a verdict by a Special CBI Magistrate in Chandigarh on 21 December. Former Haryana Director General of Police SPS Rathore was sentenced to six months in prison and a fine of Rs 1,000 for the alleged molestation of 14-year-old Ruchika Girhotra in 1990. Rathore was immediately released on bail on a surety of Rs 10,000. Coming out of the court with his wife, Rathore, grinning widely, told the press: “I am relieved today. Thanks to my lovely wife who stood by me.”

Ruchika Girhotra had killed herself in 1993 by drinking insecticide.

Nineteen years for the resolution of a child molestation case which had an eyewitness willing to testify. The story of how the case unfolded should make us hang our heads in shame. Ruchika was a talented tennis player and had gone to meet Rathore, then Haryana Lawn Tennis Federation head honcho, at his office-cum-residence, with her friend Aradhana Gupta. Ruchika was alone in the room with Rathore, when Aradhana heard noises of a scuffle and entered to see Ruchika struggling to get out of Rathore’s arms. On seeing Aradhana, Rathore released Ruchika and the two girls ran.

At her home, Aradhana’s father Anand Parkash heard the two girls whispering and Ruchika sobbing. The girls told him what had happened. A police complaint was lodged. The then DGP called Rathore to his office. In response, Rathore apparently arranged for dozens of thugs to attack the Girhotra home shouting obscene slogans about the girl. Within weeks, the Haryana Tennis Federation suspended Ruchika. A month later, her school expelled her. Her brother Ashu had six cases of car theft slapped on him. In October 1993, he was arrested by the Crime Branch and tortured. Rathore apparently told him that if Ruchika did not take her complaint back, he would ruin the family. In December 1993, Ruchika committed suicide, blaming herself for all her family’s troubles.

That broke the Girhotra family’s back. They decided not to pursue the case. But one man would not give up, Anand Parkash, Aradhana’s father. He got Ruchika’s father to give him an affidavit that he could act on the Girhotra’s behalf. Parkash was a Haryana government employee. False disciplinary charges were brought against him. He was constantly transferred for no reason at all. He says hoodlums would stalk and threaten his daughter. Rathore offered him money. But Anand never gave up. Aradhana married and settled in Australia. When she came to India to testify, she had to wait for a month as her court dates kept getting mysteriously postponed. Finally, the day before she was supposed to fly back, she was allowed to appear as witness.

One of the charges against Rathore was abetment of suicide. He was acquitted on that one.

Six months in prison and a fine of Rs 1,000? For devastating the lives of so many people over nearly two decades? For driving a completely innocent girl to suicide? And one can be sure that Rathore will appeal, and may never even end up spending a night in jail. And after the verdict, the man says he is “relieved”!

Even after knowing how much evil a human heart can store, one is still surprised often by how much cruelty we are capable of. Even after knowing how slow and flawed the Indian judicial system is, one is still startled often by how poorly it works. I am no expert on the Indian Penal Code, so I am quite ready to accept that the magistrate did not have the option of ordering a stronger sentence. Then there is something so seriously wrong with our antiquated punishment norms that we should be sickened.

Look at the face of the man in the picture, perfectly happy with life, accompanied by his wife, who was also his defence counsel. We must remember that face.