People Laughing at Themselves

Ye living under a star sign: throw not stones at someone’s dream of hidden gold 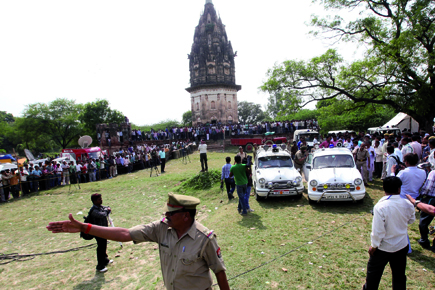 Ye living under a star sign: throw not stones at someone’s dream of hidden gold


After the unsurprising incident of a godman’s dream leading to the Archaeological Survey of India digging for gold under the Unnao Fort, The Indian Express came out with an editorial on 19 October ending with these lines: ‘In this pleasant anticipation of imminent wealth—for village, state and nation—perhaps it is only kill-joys who will blame the ASI for short-changing scientific rigour on the whims of politicians. Even if all that glitters is a sadhu’s ambitions, this could go down as a case of unforgettable freakonomics, India-style.’

You will notice the sarcasm and condescension; they are definitely warranted, given how absurd the episode is. Editorials reflect the opinion of the paper and we can safely presume that The Indian Express is completely clear about the virtues of that ‘scientific rigour’ it found so lacking in the ASI.

It is then a little hard to explain what the paper carried on page 18 that same day. If you were a Leo born between 24 July and 23 August, the paper said, this is what would happen to you: ‘Mercury’s witty wanderings in your chart are maintained for a little while longer, and helping you to stay one step ahead of the field in terms of your ideas and proposals. However, I don’t think you can escape today’s general undercurrent of unreason.’

Between dreaming of gold and the witty wanderings of Mercury, take your scientific pick.

The Indian Express is not the only agency so blissfully unaware of the limits of its rational leanings. It is the story of every newspaper where space is given to quackery like Reiki, Chakras, Past Life Regression, astrology, gemstones and so on. People swallow such nonsense daily, without questioning. Many among them would no doubt have smirked at the gold being dug. On Tuesday, some of them would also have observed Karva Chauth, a ritual which correlates fasting to safety despite the sad truth that no bus is not going to run over a man because his wife did not eat for a few hours.

You could argue that there is a difference between personal belief and the ASI’s use of public resources to humour one godman’s gobbledygook. That is true, but hardly a novelty. We are breathtakingly hypocritical about keeping faith separate from State. Why else do ministers and judges routinely get sworn into office in the name of ‘God’, an entity that—forget the question of its existence—does not even have a definition? Or take public festivals like Ganesh Chaturthi in Mumbai or Durga Puja in Kolkata. Entire streets are parcelled off with State sanction to self-appointed groups so that they can force everyone to celebrate. To a man not blinded by faith, how bizarre does a procession to drown a 20-foot elephant-headed idol in water look? If believing in a god who looks like an elephant is normal, then it is normal for the godman to dream and it is normal for a politician to force the ASI to act on that dream.

And you would have to agree that unlike the enormous amount of blood shed over the question of a temple or a mosque in Ayodhya, this incident is actually a wholesome sort of farce. No one is getting hurt, an entire nation is getting entertained, employment is being generated, considering the springing up of food stalls near the dig venue, and, importantly, a few wise men who thought Shobhan Sarkar (the godman who had the dream) had a hotline to God are soon going to realise that he is either mad or a fraud. The ASI does not come out looking too good, but in the fraternity of archaeologists not dependent on the body, that is no surprise either.

To the rest of the world, this incident reaffirms the exotic idea that India is a country that has developed nuclear weapons but remains, in the far reaches of its heart, a giant village.