The T20 effect on ODIs is not just about higher run rates. It has altered the nature of subplots in short-form cricket 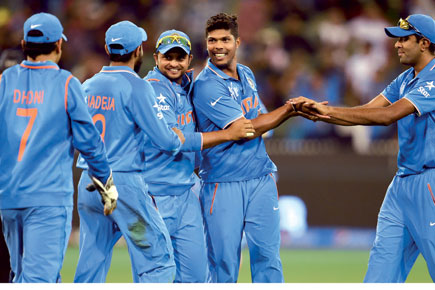 It may be nothing more profound than the disorienting effect of adjusting our body clocks to watch an extended cricket season in another time zone, but this feels like the longest World Cup in the sport’s history. There is a wellness dissertation to be done on the comparative consequences of starting early to track a game and then getting on with a full day’s distractions, versus coming to One-Day matches later in the day so that they are the primary entertainment. Maybe I exaggerate; come IPL season and the return to the usual rhythm of the international cricket calendar, the memory of this tournament hosted in Australia and New Zealand could shrink to more realistic coordinates. Or maybe not. Either way, it is tempting to inquire into the reasons that hold this World Cup apart.

In the World Cup’s final week, the line-up of the four semifinalists, New Zealand, South Africa, India, Australia, working exactly to most expectations, the big surprises are really not centred around individual players and their performances. Certainly, and this is evaluating just Indian players (for reasons of space in an illustrative example and not partisanship), Rohit and Mohit Sharma, Shikhar Dhawan, Mohammed Shami, Ravichandran Ashwin, Suresh Raina, Umesh Yadav and Virat Kohli have all nominated themselves as memorable athletes of the tournament. But somehow, at least in their first seven Cup matches, it is as a collective that they have shone, and I’d argue that this holds for the other three of the top four teams too. (There will, of course, be some standout performances in the final, and they will have special recall, such is the surround- glow of the occasion. But that’s an appraisal to be made later.)

After failing to win even a match against Australia in the long summer Down Under, in Tests and one-days, India will look back to at least the first seven of their World Cup matches to find what it was that made their bowling and batting come together so well. And no, glib claims will not do that it was all part of the plan for India to peak when it mattered (and we’ll leave aside the debate on whether in cricket the World Cup really matters so much more than a context-heavy bilateral tour). Not even the most optimistic—or delusional—among us could have forecast that India would get all 70 wickets in their first seven matches. You’d think bowlers would have figured more than twice as men of those seven, but the honour came to them only when their opponents were despatched cheaply batting first. When United Arab Emirates folded for 102, Ashwin was awarded for figures of 4/25. When West Indies fell for 182, Shami’s 3/35 sealed it for him.

Otherwise, in these matches wired for big batting totals, big individual innings charmed adjudicators. Gradual changes in fielding restrictions (the latest being that no more than four fielders can now stand outside the 30-metre circle even after the first 15 overs) have encouraged batsmen by making big shots yet less risky. But perhaps more importantly, the Twenty20 effect too has upped run rates, and we are getting a good measure of the dynamic only now.

In a cascade of 300-plus innings totals in the tournament, it is clear that innings are no longer weighted towards the first 15 overs. The era that began in the 1992 and 1996 World Cups, with Sanath Jayasuriya and Romesh Kaluwitharana as its exemplars, is decisively over. In a recent column on Cricinfo, cricketer-turned- writer Ed Smith caught the change as only he usually does: ‘The central innovation, which has now transferred from T20 to ODIs, is that talented batsmen are lethal— perhaps unstoppable—when they play without any fear of getting out. In 2003 I played in the first ever T20 league. I wrote at the time that it allowed players to play as they do in the nets, when they are totally uninhibited. This powerful freedom, however, is partly earned by the match situation, especially in the middle overs. If the batting team is behind in the match, and there are few wickets in hand, it is far harder to bat as though another wicket wouldn’t matter. The challenge now, in all white-ball cricket, is to build a position so dominant that there is no risk attached to getting out.’

Taking that thought forward, the momentum now appears to be for batsmen (or batting line-ups) alone to seize or not, and that could be why bowlers are getting sidelined in the narrative of the One-Day game. There was a time when ODIs changed the pace of Test cricket, a change forced especially by Australia in their post-1995 decade-long and total domination of cricket, when batsmen began clocking 4-or-thereabouts run rates and, equally, began giving bowlers chances. ODing on ODIs took risk aversion out of their skillset, and the tedium of pointless draws became rare. Indeed, a draw has now become something the team facing defeat forces dramatically; it is not the reflection of drift it used to be.

It is, however, too early to say whether T20’s effect on ODIs has similar collateral benefit. Because it is difficult to summon enthusiasm for big team totals that amount to nothing more than a strategic advantage. These big totals are, of course, runs to give your bowlers something to defend. But the now routinely huge innings totals are also making ODIs a competition between batting sides to see which of the two can better acclimatise to the conditions and circumstances to allow themselves to be that much more ‘uninhibited’. Quality bowling is essential to play against the top teams, and no one can hope to win if they carry the burden of loose bowling, but the avenues are closing for bowlers to get equal opportunities to be game-changers. Or at least seen to be game-changers.

When the subplots of a cricket match rarely become about a particular batsman and bowler, something vital will have been changed, if not lost.

Cricket is always in fear of losing something precious. Stuff lost over time, with a great deal of hand-wringing, includes the rest day in the midst of a five-day Test, and it is mildly amusing to recall how concluding a five-day Test in the course of just five days at the time looked like a crude, civilisation-destroying hastening of the game. When the World Cup began, an ODI had 60 overs, and the subsequent popularity of the 50-overs-a-side format set off apprehensions that unless wise and genteel counsel prevailed, abbreviation would be on autopilot till we’d get to five-overs-a-side matches. My point is that the game has forever been altering to keep the spectator interested, and the end of cricket as we have known it has not quite come to pass. In fact, wasn’t it just a few years ago that the death of the ODI had been widely predicted?

But if this World Cup is to have lasting recall, it must be the point at which cricket begins the process of determining what the essentials of the game are. Who are the participants that must be adequately valued, and how, in the course of a match, series or tour, as the case may be? Batsmen alone? Or bowlers too? How about umpires? Fielders? Spectators? Reporters? What are the enabling conditions that would allow each of them to raise his involvement in the game? Maybe it feels like the longest World Cup because we can feel the weight of cricket’s unanswered questions stacking up.