Why do we chuckle at the peacock dance of flamboyant middle-aged men? 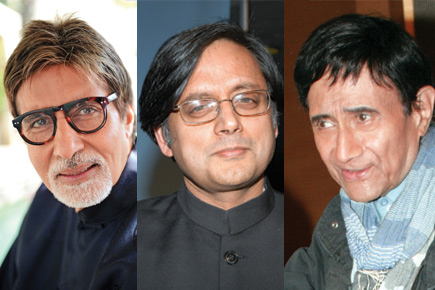 Why do we chuckle at the peacock dance of flamboyant middle-aged men?


For some reason I cannot get rid of a visual in my head that keeps playing in near perpetuity, a visual that does not exist—Dr Shashi Tharoor turning to the camera in slow motion, his hair flying and then settling down strand by strand. And there is a background score of a soprano singing with expanded vowels, “saauft and baauncing haair.”

It is hard to miss a mild national contempt for Tharoor, an inner Indian guffaw that condemns him not for impropriety but for being 54 and physically flamboyant. There is something entertaining about him in a farcical way: his suspicions of his own good looks, his dyed hair that falls in self regard, his aspiration to remain young, his accent that he appears to have acquired after the same head injury that Jaswant Singh suffered, his surface perfection which has the quality of a peacock dance, a being that is organised to hunt for the best available female. Why do we smile at such a sight? Why is it that men of a certain age cannot be dashing without becoming a spectacle?

In India, especially, as middle-aged men increasingly refuse to behave like middle-aged men, their attempts at being hip are punished by a vague unspoken rebuke. In older times, the subject of ridicule was the wig. Now, the world has become larger, there are many more things an ageing male can do, but the smirks against his vanity are the same. He cannot lift weights in the gym without eliciting unflattering opinions, he cannot tuck his T-shirt into his denims without appearing to aspire for something he should not be aspiring for, he cannot use the word ‘dude’ without sounding silly.

From this trial of perception, actors alone are exempt because they are meant to be spectacles anyway. So Amitabh Bachchan’s borrowed hair is not a sign of his desperation to be sexually relevant, but a form of business strategy that maintains the Amitabh Bachchan of our imagination—a three-dimensional surface that talks and dances. But this kindness is granted only as long as the actors remain artistically potent. For instance, when Dev Anand is described as an ‘evergreen hero’, it is not entirely a national compliment, as he imagines. ‘Evergreen hero’ is pronounced with a soft chuckle as if he is a clown not to reveal the full degradation and disfigurement of his age.

The dignity of age, which inspires the old to behave old and look old, is not a requirement that they have of themselves. It is, like a well-drafted will, an expectation that others have of them. But why do people want old men to be diminished and contained, why should they be physically modest? And why are they ridiculed when they assume the symptoms of youth? Could it be that they are unwanted competition in the mating game, unwanted by both young men and young women? The human disgust at the thought of the old aspiring to mate with the young is an evolutionary force that dwells in every person, except the old beneficiaries.

This disgust is a brooding theme in JM Coetzee’s extraordinary novel Disgrace. A middle-aged professor has an affair with a young student, he faces a trial, and is forced to quit his job in disgrace.

‘…That was what the trial was set up to punish, once all the fine words were stripped away. On trial for his way of life. For unnatural acts: for broadcasting old seed, tired seed, seed that does not quicken, contra naturam. If the old men hog the young women, what will be the future of the species? That, at bottom, was the case for the prosecution. Half of literature is about it: young women struggling to escape from under the weight of old men, for the sake of the species.’

So is that at the heart of it all? A species rebukes its flamboyant old men because it suspects that they want to have a chance with the young, an aspiration that must be crushed because old men should not be allowed to transmit their impoverished semen.

But sometimes one wonders why the old try so hard to be young. After a near lifetime, isn’t there a great peace in finally giving up, in greying, balding, decaying and dying? Isn’t there peace in just letting go? Or is it something that only the young can say in the luxury of not knowing what it is to decay in plain sight?