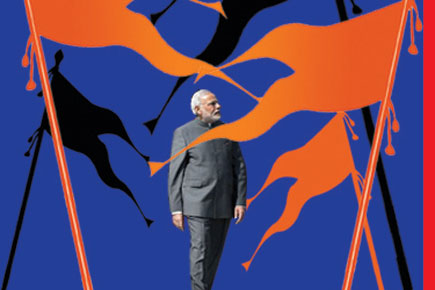 Extremities define the Indian story, and in the popular narrative, they are captured by clichés. The bullock cart is a tired metaphor set against the torque of modern India. The ash-covered sadhu cohabits in disorienting disharmony with the world-conquering hero from India Enterprise. The snake charmer has had a fabulous run as counterpoint to the silicon-savvy Indian whizz. We have a Bihar to neutralise Bangalore, fourth-world civic amenities to mock first-world aspirations, the brutal countryside to minimise the urban gloss…We could go on, and the vintage Oriental treasury of Indian exoticism, steeped of course in magic and a million malignancies, is still available for those of us desperate for enduring images we can deploy against current ironies.

So the man killed in Dadri, allegedly for eating beef, has become a posthumous repudiation of the man feted in San Jose. In another brutalised—and brutalising— village of Uttar Pradesh, the simulated frenzy over sacrilege isolates the outsider. The unipolarity of cultural India, sustained by keepers of the faith, abhors ‘bad taste’, and the beef-eater is a natural ally of blasphemers and subversives who challenge the fundamentals of heritage. This India, real and expanding in the collective fantasy of its gatekeepers, is far removed from the India that is being sold by the Prime Minister, who imagines the future in a vocabulary that is not borrowed from mythology. We are back in the zone of extremities, and the antediluvian is set against the digital. As the defender of the sacred cow hunts for cultural polluters, the dreamer of digital India seeks the best of innovators.

Modi shuttles between the extremities with remarkable ease, and it is worrying. He should not look so comfortable in both these Indias. On the stump in 2014, he was not a marketeer of an India marinated in mythology for the consumption of the so- called cultural nationalists. He put the toilet above the temple on his priority list, and it needed courage to do so. As he made an argument for winning India, he, unlike many others in his political family, refused to travel back in time to the glory of a Mahabharata. He chose to converse with the future in a language accessible to the young and the aspirational. He won India on the promise of tomorrow, not a perfumed yesterday. As Prime Minister, he did not do anything to bring India closer to the hallucinations of the ideological fringe. He did not do anything to make them irrelevant or insignificant either.

The more he ignored them, the more he looked indifferent. Even as he was trying to create a new order in governance and civic responsibility, a cultural establishment was in the making, and it was a blatant show of empowerment. It is still a work in progress, and its members will not tolerate the transgressions of the beef-eater. They want to rebuild an India where ‘Hindu’ will become the defining adjective of our cultural identity. They want suitable historians and cultural apparatchiks to rebrand our institutions. They abhor questions, and they even hate music from the other side of the border. This India is an artificial construction like any other Ruritania born in the minds of those who overcome the imperfections of the present by manufacturing an alternative with raw materials bought from souvenir shops of mythology. Its rebuttal should come from the great communicator himself.

Modi has the political, cultural and the administrative legitimacy to counter the argument of the rearmed cultural right, and sooner the better for the simple reason that he cannot afford to lose his own argument in the din. Modi is playing the part of the wise man from the east to perfection, and at the international high tables, he faces hardly any competition as the world is wary of the Chinese leader for whom democracy—what dissidents call the fifth modernisation—is still a disputed item in the marketplace. The India that Modi celebrates abroad is a country where the future is synonymous with freedom. This India will become the sales pitch of an ambitious politician desperate for a piece of history if the India of the cultural right goes unchallenged. As a political story, the transformation of Modi has no Indian parallel, and look at the ease with which he has won the perception war outside India. He has to regain the argument at home by not letting the mad men of the Hindu Right undermine his ambition.

PS: The selective dissent of Indian writers, now throwing away all those little statuettes in defence of beef -eaters and other endangered species in ‘fascist’ India, is an awesome sight. They seek headlines only when it is the Right time on the Hindu calendar. Don’t remember seeing such solidarity when Salman Rushdie was denied freedom in 1989, just to cite one example.