Ravaged by war, terror and bad politics, Afghanistan is waiting for a new life after the withdrawal of American troops 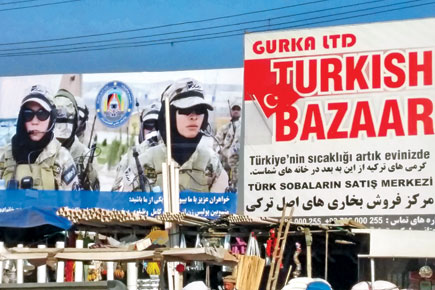 For a first-time visitor arriving in Kabul with the preconceived image of a country in ruins, it is perfect normalcy that greets you. It is the first day of December, bright and calm. I land at Hamid Karzai International Airport, perhaps the only airport named after a living world leader who is still young. As a former president who shouldered the burden of nation- building in Afghanistan post-9/11, he continues to advise current Afghan leaders. I am here to speak at a counter-terrorism conference organised by the Afghan Ministry of Foreign Affairs. I expect Kabul airport to be a fortress with armed commandos on alert, but no cops are to be seen around.

A car drives me down the airport expressway into Shar-e- Naw (the new city), also known as the Green Zone, which is home to embassies and government buildings. Some of the first buildings I spot on either side of the expressway speak of the social reality of the Afghan wedding. Big uroosi, or wedding halls, dot Kabul. As people acquired new money in recent years, such halls became a sign of social mobility. While wedding parties were traditionally held at home, they are a big business now, says Rahimullah Barez, an official who accompanies me from the airport.

A mile down the road, female commandos look at passersby from a large billboard, urging them to support the Milli Police (the national police). Life in Shar-e-Naw appears normal. For an Indian used to seeing large crowds, spaces appear open and wide. Hotels, embassies and government buildings hide behind nondescript walls. Aside from a few new buildings, there are no tall structures. I see a few police vehicles parked at a chowk (I learn that ‘chowk’ is also a word in Dari, the main language spoken in the city) and wonder what fate awaits these policemen in the event of an attack by the Taliban. The US Embassy has issued an alert warning of an ‘imminent’ terror attack within 48 hours. I am worried.

Fear is just a line, someone said, in your head. But it really begins to sink in when I arrive at the Kabul Star, a luxury hotel with armed guards at the gate. After the driver answers a few questions, the door opens. A second security check and a second door opens. And inside, there is another armed guard. Shrinivasrao S Sohoni, a former Indian civil servant who has spent several years in Kabul, reminds me that hotels and restaurants in the Afghan capital have double doors. Within the 30 minutes of travel from the airport to the hotel, my perception of Afghanistan is totally reversed. It is real this time.

I ask people in the hotel if it is safe to go out. I get three alternative responses: ‘It is safe’; ‘Go but be careful’; ‘Anything can happen.’ I stay put in the hotel until I find a local guide to accompany me. “See the metal door just outside where the lift door opens on each floor. In the event of a terror attack, it can be centrally locked to prevent militants from travelling from one floor to another,” Sohoni points out. The Kabul Star, situated near the Iranian Embassy and the Presidential Palace, was one of the targets attacked by the Taliban on 15 April 2012. The hotel has enhanced its security since then.

The nature of terrorism that Afghanistan faces today is murky and it cannot be attributed solely to the Taliban. “All criminals use the name of the Taliban to extract money,” says Matiullah, an employee with a private British firm that contracts security services to embassies and businesses in Kabul. The security in Kabul is okay, but you cannot travel to Ghazni and Kandahar by road in daytime if you are a foreigner, says Matiullah. “The main reason for kidnappings and lawlessness is poverty,” he reminds me. Poverty is widespread. Afghan youth line up at the Iranian and the Turkish embassies to get visas for Europe. Almost 70 per cent of people in Afghanistan do not have jobs. Everyone remembers Karzai’s tenure when foreign money was pouring in, but with international troops now leaving, the Afghan economy looks fragile. The situation is compounded by perceptions of President Ashraf Ghani being a technocrat who lacks political leadership.

I book a taxi through the hotel, checking that the driver is personally known to the staff. Syed Ghulam Sakhi, a student of Political Science at Mashal University of Kabul, reminds me to carry my passport. “If you look like a Pakistani, you are likely to be stopped and questioned by police,” he says. Before I arrived here, friends had told me to ask the driver to switch off his mobile phone so he cannot alert likely kidnappers. I decide to trust my driver, Noor Agha. Kabul’s roads are wide and newly built. On the way to Qargah, a lakeside weekend picnic spot that is yet to develop, women clad in Taliban-era full- body, net-on-face burkha sit on the divider of the two-way road. They are begging, some along with their children. Over the past few years, Afghan women have generally shed this type of burkha. The current generation also wears veils but with the eyes left uncovered.

Before the 1980s, Kabul was a cosmopolitan city where women could go to universities and offices in skirts—unimaginable in contemporary times. Now, young women in Kabul, at least in the relative safety of the Shar-e-Naw district, are once again wearing skirts, albeit over trousers. Their faces are uncovered, a sign of big social change.

There is growing awareness of women’s rights. Actually, there was always a women’s movement in Afghanistan that was suppressed from the 1980s onwards. Now, a street in Kabul has been named Jada Farkhunda, after Farkhunda Malikzada, a 27-year-old woman who was lynched to death by a mob in April this year on false allegations that she had burnt the pages of the Qur’an. Dozens of people and policemen were sentenced to serve jail terms. Afghan women protested in large numbers against Farkhunda’s murder, and in a bold move unseen in a Muslim society, stopped men from lowering her coffin into the grave. Not far from Jada Farkhunda, a number of roadside bookshops are selling books, but mostly in Dari. In Kabul, most people speak a comfortable level of Hindustani, picked up from Bollywood movies, and interspersed with Dari words. In Shar-e-Naw, I am surprised to see a boy and a girl holding hands on a crowded street. I am sure this is rare, but a sign of change nevertheless. I visit the Bagh-e-Babur, where the first Mughal Emperor Zahiruddin Muhammad Babur is buried along with other family members. The garden is immaculate. “When the Taliban ruled, it was barren, brown and filled with debris and unexploded ordnance,” says Alberto Fernandez, a former US diplomat who was tasked with its restoration. The Aga Khan Foundation, the US and German governments, among others, helped in its restoration after the city was liberated from the Taliban. Bagh-e-Babur seems to be the city’s main lovers’ spot. But this freedom is fragile, says Kanishka Nawabi, a counter-extremism researcher, adding that women disappear from Kabul’s streets for a few days after each terror attack by the Taliban.

On the positive side, notes Nawabi, the number of schools in the country has doubled over the past 13 years—from about 2,000 to over 4,000 now. Many Afghan youths, computer-literate and educated abroad, are now getting into the second and the third tiers of the country’s political leadership and they could turn things around, he says.

Mohammad Salim Zarifi, who is a weightlifting champion in the 70-kg category, tells me that Afghan youth are doing well in cricket, taekwondo, football and boxing. Schools have cricket and football teams for girls, he says.

At the counter-terrorism conference in Kabul on 2 December, I argue that Islamic extremism can be undermined by ensuring that more and more Muslim women enter shops, streets, government offices and police departments. Islamic countries with deeply religious societies like Afghanistan cannot hope to progress without women marching in step with men. Give away bicycles to young girls, I urge, for they can empower them to enter streets and public spaces dominated by men. My main point at the conference is: an Islamic Reformation will begin in Afghanistan when you buy a bicycle for your daughter. Some women drive cars in Kabul, but motorbikes and bicycles are not yet for women.

Afghans are aware of their nation’s extraordinary difficulties. They protect their freedoms in ways that even Indians do not. Billboards of Afghan leaders and lawmakers assassinated by the Taliban can be seen across the capital city. Large cut-outs of Ahmad Shah Masood, the national hero who was assassinated two days before 9/11, adorn mountain tops and important buildings in constant reminder of the sacrifices Afghans have made in recent years. Posters urging support for Afghan policemen can be seen hanging from electric poles.

In the 1980s, the Afghan mujahideen, aided by CIA money and coordinated by the Inter-Services Intelligence (ISI) of the Pakistani military, fought against the Soviets for the independence of Afghanistan. As Soviet troops withdrew in 1989, the ISI emerged victorious in Afghanistan and propped up the Taliban in the mid-1990s as civil war raged among Afghan warlords for control of power. Post-9/11, the ISI has continued to use the Taliban to advance Pakistan’s foreign policy objectives in Afghanistan. Kanishka Nawabi, who heads the Cooperation for Peace and Unity, an NGO based in Kabul, estimates that there are about 30,000 active insurgents in Afghanistan currently. The figure is inexact, but includes criminals of all varieties.

In the next decade, Afghanistan may not be able to pay for its security forces, which may remain engaged in a war of attrition, Nawabi says, adding that all neighbouring countries are interfering in Afghanistan. Iran allows ISIS fighters to pass through its territory into Afghanistan on the condition that they do not create problems inside Iran, he claims. I ask Amar Sinha, the Indian Ambassador to Afghanistan, for his assessment of the security situation. Sinha says he is optimistic that the situation could improve if there is “greater international pressure on Pakistan to end support” to the Taliban. “Without that, some [militant] groups will remain in play,” Sinha says, adding that US President Barack Obama’s statement to the Taliban to reconcile themselves to a changed country if they want to see troops gone has shone a ray of hope.

Modern nation-states can fight terrorists, but it is not easy when they are state-backed. Last month, the bodies of 41 Pakistani terrorists killed in Afghanistan were brought to the Lower and Upper Dir districts of Pakistan. In modern times, it is unlikely that terrorists can take over states. They could at worst capture parts of a country’s territory and they will be removed sooner or later, as was demonstrated in late- September when the Taliban took over the northern Afghan city of Kunduz for a few days. Syed Ghulam Sakhi sums up the Taliban threat to the Afghan capital in these words: “The Taliban cannot hide anywhere in Kabul. They come in groups of three-five militants from outside to launch an attack and each time the security forces clean up soon after.”