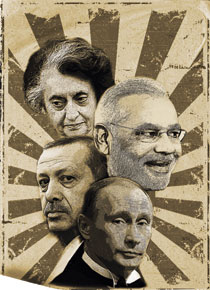 The national mind is the last refuge of the autocrat. Take the one in Moscow. Vladimir Vladimirovich Putin is one of the most popular politicians in the world today. There are several reasons for this in spite of the fact that he has contributed more than any other post-Soviet leader to the stifling of Russian civil society. The most obvious reason is Ukraine, a country he invaded while the world slept; the annexation of Crimea to Russia was perhaps the easiest instance of extraterritorial terror in modern history. But Putin is in no mood to retreat; eastern Ukraine is his playground, and the recent shooting down of Malaysia Airlines’ MH17 was, in the book of Putin, an accident. Stuff happens. As the war raged in Ukraine, the warmonger’s popularity soared at home. Emboldened by anti-Russian noise from the European Union and elsewhere, and united by persecution complex, Russians rallied behind the uber nationalist who drew his strength from the fantasy of a Soviet empire. Today, American and European sanctions against Russia may hurt, but the Greater Russian’s popularity remains unaffected. Rather, it is rising.

Does this mean that popularity alone is the mark of leadership?

The leader who taps the rich vein of national pride, no matter how the world rates him, has the better chance of being mythicised at home. History has so many of those types—the good, the bad and the nasty. Hitler was a very popular leader— let us not forget that—but certainly not a model leader, unless you’re one of those anti-Semitic protestors enraged by Gaza. For a more recent example, there was Hugo Chavez, who in his nationalist delirium saw himself as part Simon Bolivar, part Che, part Castro, but was in sum a comic-strip demagogue. His popularity was sustained by the hysteria of nationalism and anti-Americanism. Autocracy itself is about a leader’s notion of being the one who knows better. The nation endangered and isolated needs the maximum leader who embodies the sorrows, humiliations, ambition and pride of the homeland—and such a figure claims complete copyright over the conscience of his subjects. He is the autocrat who makes himself indispensable by invoking the lost glory—and by ranting against the enemy within and without. That is what Putin, whose thuggery is camouflaged in ultra-nationalism, does. And that is what makes him, in the panegyrics of certain kinds of nationalists, a strong leader worth copying.

The strong leader argument is in vogue in certain places, including Delhi, because we are living in a world let down by weaklings. India for ten years suffered one, even though Manmohan Singh had the opportunity to seize history. He, by preferring office to power, let it pass by him. India then was not yearning for a strong leader; it was just waiting to be led. Strong leaders are popular leaders, but their strength, invariably, is delusionary. And even in open societies, it could be the strength of the jackboot. Recep Tayyip Erdogan of Turkey, like Putin, is a strong leader for whom freedom is too contentious a concept to be left to amateurs who have the habit of swarming the city square and demanding the unthinkable. He has already challenged the secular ideal of Kemal Ataturk—and his inheritors in the military. His idea of inclusiveness is to make the secular state more Islam-friendly. He is the leader larger than the state who is entitled—or chosen—to do so. The leader-redeemer has to be stronger, and he listens only to himself. Every strong leader is not an autocrat, but every autocrat is a strong leader. And always, it is popularity that legitimatises his strength—and his transgressions.

This brings us to the Indian strong leader. We all wanted one; and some of us thought that India badly needed a variation of Indira Gandhi. She was one leader India indulged till her last day; India formed an emotional covenant with her, and she played out the Mother India script to perfection. She struck such a fine balance between power and paranoia, and India swayed to the best and worst of her as a leader. It was her popularity— and her own idea of indispensability— that aggravated her totalitarian temptations. The age of Modi is all about Leadership with a capital L, and the size of the popular mandate that brought him to Delhi gives him that rare freedom to be the strong leader that India has been waiting for. He has shown no intention to copy a Putin or an Erdogan, and that is wonderful. Modi has a historic opportunity to prove that a strong leader can redeem democracy, which, according to his counterparts in Ankara and Moscow, hardly serve the nationalist mission. He could be the one who can tell the world that strength and popularity do not necessarily breed autocracy.