…under a blanket of red dust in Goa’s mining belt 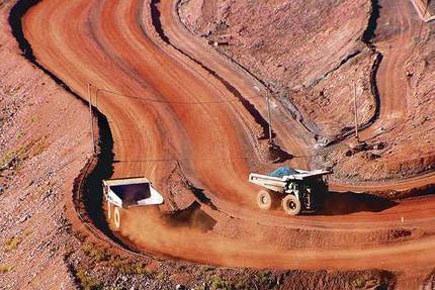 …under a blanket of red dust in Goa’s mining belt


Every so often, I go sightseeing through the mining regions of inland Goa. I cannot explain why I do this and it always takes days to recover. The huge red wounds in the earth feel as if they’re on my own body, the bulldozers termites ravaging my skin, the red dust that smothers this one-time Eden choking me as I try to breathe my way back to calm.

Last time I went out, I met two little girls, sisters, trekking across a lonely long stretch of red barren land. They were on their way to the (now) far forest, knives and ropes in hand, to collect bundles of branches for their cow to eat. Until recently, this had all been covered with lush pasture and thick jungle. “Now we have to walk so far to do our chores, we don’t have time for school work,” said the bigger sister. “We don’t even have time to play anymore,” said the other. They showed me how they used to play right here, in their secret jungle hideaway, when they came to collect branches: turn by turn, they would lie in the small cool stream, still as the sky, tiny nose peeking out, until found by the other. Then they would laugh and steal just a few more moments, listening to the birds and flutter of the leaves. “The trucks cut it all down,” said one, “It was very loud.” “We were very scared,” said her sister. The sun was glaring down on our heads; they still had a long walk ahead. “Bapa said they will make it up to us,” said the big sister, “We are still waiting.”

It was the little girls I was thinking of as I sat in the lovely, ocean-facing lobby of a five-star hotel in Panaji. I was there to meet Mr M, a senior member of one of Goa’s premier mining families. M, who is also a senior functionary of the Hindutva movement, had been very persistent over many months, and in the end, I had agreed, thinking to myself, ‘What could this cost me, after all?’ He was already there when I arrived, deep in concentration, marking up a recent study of the devastation wrought by mining of the Western Ghats. M was going through it very thoroughly, trying to find holes in the authors’ claims and proof of their dishonest intentions. He explained that Goa’s environmental activists were in reality agents of the Pope in Rome, whose real purpose was to embarrass Hindus. When the waiter came over, he invited me to order something, so I did, a juice and sandwich; he ordered a cold coffee topped with ice cream.

“Use your own mind, Aimee, think, investigate,” he commanded sharply, “Don’t always take things at face value. Who actually has the most to gain from stopping the mining in Goa?”

All living things? I asked, but by now M was obviously disappointed in me.

“Why don’t they ever ask us [mine owners] for our opinions and our feedback when they write such reports or have their meetings and conventions?” he asked, truly hurt, as his ice cream melted into the tall glass.

Perhaps they assume they know what you will say without having to ask you? I asked, trying to sound kind. He really seemed to mind being excluded, shunned.

“Do not presume things!” he ordered, “Do you really think we are involved in mining for our own good? Do you really think we need the profits or the headaches?” “Please understand,” he exclaimed, eyes locked onto mine, present and intense, “We have so much already that no one in our family will need to work for the next five generations. We are not doing any of this for ourselves. No! We do what we do for the good of the people of Goa. They would be nowhere without us, without the mining.”

But how does Hindutva come into all this, I ask, trying to relax myself, but I’m starting to feel choked, as if a cloud of red dust had descended upon this elegant lobby (the hotel is owned by another Goan mining family, by the way).

“You could say they are connected in that mining has brought great prosperity to Goa, to India,” he answered after some reflection, “and because of this, Hindus everywhere can now raise their head in pride.” And then the meeting was suddenly over. M said goodbye and walked away, leaving me the bill. I hesitated, and then sent him an SMS, voicing my surprise (I was worse than surprised). He apologised, and promised to make it up to me. I am still waiting.