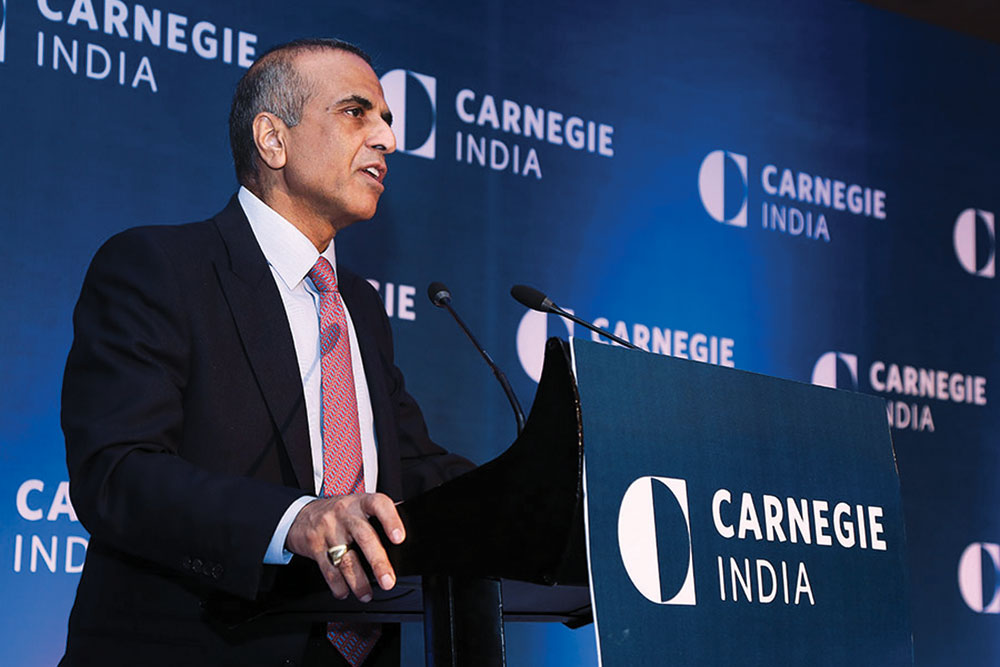 IN 2013, Brookings Institution, a prestigious American think tank, opened its New Delhi chapter, promising to disseminate ‘recommendations for Indian policymakers’. Three years later, its Washington twin, Carnegie Endowment for International Peace, set up shop in the country, hoping to develop ‘fresh policy ideas and direct[ly] [engage] and collaborat[e] with decision makers in [Indian] government, business, and civil society’. It is reasonable to surmise that the policy advice proffered by these two organisations will, at a minimum, be in tune with the US interests and geopolitics.

In fact, at an event on 6 April, Sunil Mittal, owner of Bharti Airtel, a big donor and chairman of the board of trustees of Carnegie India, removed any doubts on this score. “We have put out our flag here,” he declared, without a trace of irony in a speech that to some seemed studded with many other cringe-worthy gems, such as his plea to numerous Indian moneybags in the audience to show more “generosity in moving our agenda forward”—meaning, presumably, the Carnegie (cum-Brookings)-qua-US government policy agenda in this country.

Carnegie and Brookings have established a presence financed by Indians, to influence the Indian Government and engender domestic policies that resonate with the United States’ regional and international posture. It is a business model last implemented when the famed Jagat Seths of Murshidabad subsidised the East India Company’s operations.

It marks an astonishing turn in Indian foreign policy that until the last years of the 20th century had made good by leveraging the country’s autonomous heft and independent standing in the world—keeping all big powers at bay while getting close to this or that major country on a contingency basis to advance specific strategic interests from time to time, and by scrupulously preserving its broad policy latitude and freedom of action. But Shivshankar Menon, a star in the Brookings India firmament, during his time as India’s Foreign Secretary and National Security Adviser in the Manmohan Singh dispensation, scoffed at Indian policies to ‘balance’ regional and international power as “oh so 19th century” and now foresees no detrimental outcomes from buying into US security schemes. That such sentiments are mainstream today is attributable to the institutionalisation in the late 1990s of the collaborationist school of national security policy thinking propagated by the late K Subrahmanyam, the ‘go to’ strategist for the Indian Government.

In a nutshell, Subrahmanyam’s idea was that in a world dominated by the US, it made economic, technological and military sense to foster a strategic partnership with it to help propel the Indian economy forward and enable the country to technologically and militarily compete with China, and, by acting as a ‘responsible’ country with ‘reasonable’ policies, become a stakeholder in a system of durable peace in Asia overseen by Washington DC. The policies of AB Vajpayee, Manmohan Singh, and Narendra Modi have hewed to the Subrahmanyam script. They have made capital purchases ($10 billion worth of transport planes, for example, with $25 billion worth of nuclear reactors in the pipeline), courted US trade and investments, enhanced military cooperation, and even compromised India’s nuclear security (by acquiescing in a testing moratorium cemented by the Indo-US nuclear deal and restricting India to a small nuclear arsenal for ‘minimum deterrence’). It may be recalled that Subrahmanyam and his acolytes campaigned for India’s signing the Comprehensive Test Ban Treaty in 1995-96, which would have left India stranded short of even basic low-yield fission weapons.

Subrahmanyam’s prescriptions found eager takers because toadying up to the West is in India’s genes. The retention, post- 1947, of the colonial-era civil services, administrative structure and armed forces wedded to British norms and values has perpetuated policies in the Western mould, notwithstanding the ‘socialism’ professed by its rulers. Moreover, the English-medium education system has had its effect. This is another colonial legacy that today mass produces software specialists, engineers, doctors and financial managers itching to service the post- industrial economies of the US, UK, Canada and Australia. Indian policies to keep this ‘brain bank’ solvent have helped firm up domestic support for US-friendly policies among the middle-class and other aspiring sections of the Indian society, complete with an annual song-and-dance celebration of our ‘pravasis’ staged by the Ministry of External Affairs which loops back into jam-packed NRI receptions for Prime Minister Modi on his jaunts to Western cities.

The outsourcing of India’s foreign policy begs the question: Does the Indian Government have a sense of India?

India, in the minds of the new lot of Indian rulers, is thus increasingly only a cultural expression, not a national territorial entity whose interests have to be vigorously protected, pursued and advanced by any and all means. In their reckoning, the nation and national interest are fungible concepts and the policies meant to serve them can be entirely elastic. So, C Raja Mohan, director of the local Carnegie unit, argues for India’s becoming a part of the ‘political West’ and for its joining China’s ‘One Belt, One Road’ initiative, deeming these moves as “pragmatic economics and muscular geopolitics”. But cutting deals at every step reflects a susceptibility to pressure and an infirm will, compounding the confusion at the heart of Indian foreign and military policies. When aggregated, the effects of such moves can quickly hollow out the nation.

Central to giving legitimacy to the role of American think tanks in shaping Indian foreign policy is Ashley Tellis. As a senior Carnegie associate in Washington and heavyweight policy wonk, he finessed the Nuclear Deal with the US through Indian corridors. Tellis enjoys unprecedented access to the highest in the land, and rarely misses an opportunity to push US objectives in the guise of serving India’s interests. He, for instance, contends in a recent monograph that India’s best bet is to ally with the US and Japan because it will ‘never be capable of holding its own against… China or defining the international system to its advantage in the face of possible opposition’, and, that even Modi’s more modest goal of making India ‘a leading power’ will require it to lean on the US.

This is a self-serving thesis for the obvious reason that India has not discriminately built up its strategic capabilities or exercised its hard power options to make life difficult for China, nor reacted in kind to China’s elbows in the face. Beijing has had a free pass. Merely mentioning a transfer of nuclear missiles to Vietnam and the Philippines, or activation of the Tibet and Uyghur ‘cards’, is to hint at the sort of trouble India can create for China as payback for its nuclear missile arming of Pakistan and supporting insurgencies in the Indian northeast.

Consumed with pleasing Washington and fearful of displeasing Beijing, Indian governments—including Modi’s— have settled into a comfortable niche they have carved out of a small-minded, narrow-visioned Indian state that can be relied upon not to be disruptive, create trouble, or undermine regional and global orders that victimise it. Such weak-willed and weak-kneed regimes will, however, seek ‘narratives’ from Carnegie and Brookings that would justify their risk-averse, talk-much-do-little policies that hitch the country to the US bandwagon. This last, Foreign Secretary S Jaishankar said at the Carnegie do, constitutes “a contemporary agenda [that goes] beyond the debates of a less confident era”. India, he averred, must “leverage the dominant, collaborate with the convergent, and manage the competition”.

Subrahmanyam had observed that, “With the Americans, you purchase not just weapons but a security relationship… [We should] build it into [our] calculations.” Jaishankar didn’t explain how Modi’s forging a military alliance with the US by signing the ‘foundational agreements’ that Washington desires, such as the Logistics Support Agreement (LSA), Communications Interoperability and Security Memorandum of Agreement, and the Basic Exchange and Cooperation Agreement, which will tar India’s reputation in the Third World, limit India’s room for manoeuvre, alienate Moscow, hobble sensitive strategic projects involving Russian technical expertise, and comprehensively ground the country’s fighting capabilities featuring Russian hardware, even as America offers us armaments of 1970s vintage—F-16/F-18 combat aircraft, will ‘leverage the dominant’ and serve the national interest.

The LSA, for example, is unnecessary because it only formalises an existing arrangement whereby US ships and aircraft are refuelled and replenished on a barter basis to avoid negotiating the complex accounting systems in each other’s country and handling cash. The LSA will end up re-hyphenating India with Pakistan, as Islamabad is on the LSA grid and to get reimbursement for sustaining and servicing US troops in Afghanistan, has to jump through procedural hoops and face US Congressional scrutiny. Does Modi favour exposing the Indian military to this kind of public humiliation in another country? Apologists for the accords claim they will extend the operational reach of the Indian navy and air force. But why would New Delhi opt for such a short-term salve when the long term solution of developing distant bases (in the Agalégas in Mauritius, in northern Mozambique, Seychelles, et al) is available for the asking?

Modi’s approval of these agreements— to satisfy President Barack Obama, perhaps—may be traced to his palpable fascination with the US. He is planning his fourth visit to Washington soon. It is in keeping with the impetuous decisions he makes (such as committing the country to buy 36 Rafale fighter aircraft in Paris, initially disavowing India’s claim on the Kohinoor diamond, among others) as friendly gestures to his Western hosts.

The outsourcing of India’s foreign policy in small and big ways begs the larger question: Does the Indian Government have a sense of India, its role in the region and the world, of the nation’s inherent capacity to shape its own future, and to mobilise resources for it? The answer is iffy. Why else would one see India running in place for the last six decades and still expect to get somewhere? When a country doesn’t know what it wants and how to get it, it will latch on to imported solutions. A facilitative factor is the Indian Government’s naiveté and gullibility when dealing with Western countries, resulting in its swallowing nonsensical promises such as Washington’s to help India become ‘a major power’. Related to it is the civilisational failing of mistaking tactics for strategy. It is the same old story all over again. Incapable of seeing beyond their immediate pecuniary profit, the Seths lent money to Robert Clive at Plassey, and, other repercussions apart, funded their own decline.

(Bharat Karnad is the author most recently of Why India is Not a Great Power (Yet). The author’s views do not reflect Open’s)