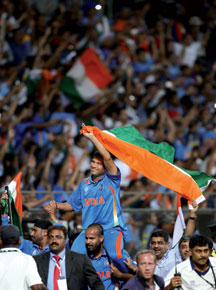 Here’s a thought to chew on: more cricket World Cups have featured Sachin Tendulkar (six) than those that haven’t (four). There is only one other cricketer, Javed Miandad, about whom you can say that. And I feel safe asserting that there will be never be another cricketer whose name we might add to this little list.

No Tendulkar: at least before it starts, that’s the calling card of this year’s World Cup, about to unfold in the Antipodes. No doubt that will sadden the hearts of legions of his fans. Like a young techie I once found waiting outside Tendulkar’s home, hoping to meet the Man. For him, cricket began and ended with Tendulkar. I mean this chap actually had no idea who else was in the Indian team and I swear I’m not making that up. And with Tendulkar having retired from the game in 2013, he had no reason and less desire left to watch India playing another match.

Like him, I suspect all Tendulkar fans have favourite Tendulkar World Cup memories, and I also suspect that for most of them it’s that famous reaching upper-cut six off Pakistan’s Shoaib Akhtar in the 2003 tournament. It being Pakistan, that blow was quickly seen as almost patriotic payback for a certain last-ball Miandad shot that stays seared into Indian memories. And it may be a measure of Tendulkar’s hold on us that we remember that disdainful treatment of Akhtar well, perhaps even more so than the painful thrashing Australia dished out to India in the 2003 final.

So yes: No more shall we see that familiar figure walking out to bat, looking up at the sun, half-squatting before settling into his stance, hammering a ball to the boundary and then doing it again. And again. Think of that as a measure of the shadow that hangs over the tournament.

Yet it’s in that shadow that I think there are some seeds for you and me, Indian fans of a gorgeous game, to enjoy the 2015 Cup.

For a quarter century, whether he liked it or not, Tendulkar stood for an entire country’s hopes and aspirations, its dreams of accomplishment and recog nition. It was often described as an overwhelming burden for one young man. Certainly he carried it well, all the way from when, as a boy, he first stepped into an international match and started carting international bowlers about. But let me suggest that his burden did something to us fans too. Because he was one spot of continuing excellence in what too many of us saw as a wasteland, it became easy to equate his successes to the team’s, and by extension to the rest of us Indians. We came to see his achievements as our country’s achievements. We began wanting, even expecting India to win every time the team took the field— because the team had this little match-winner in it.

I realise it’s a thin line I’m walking here. After all, every country’s fans hope for their team to win; so why are Indian fans any different? Well, it’s just that I’ve had this niggling feeling for some years now: to the Indian fan, perhaps subliminally, cricket has come to mean an Indian victory. Nothing else matters. So we won’t savour an exciting game if it ends in a loss for India. We won’t applaud if a Cinderella team makes a fairy-tale run in the World Cup because what if it’s at India’s expense?

We forget that this remains above all a game, one with nuance and strategy and twists, one that can fill us with soul-stirring tension and take us to soaring climaxes. We forget that the great charm of cricket lies in all that. Not in who won.

Yes, I suggest to you that this is what Tendulkar’s burden did to us Indian fans. It stripped from us some of the pure joy of the game of cricket. It told us that a match must end, one way or another, in Indian triumph. It persuaded us that our Indian-ness was measured by how fervently we wished for India to win. It managed, over the years, to tie patriotism to a mere sport.

But now Tendulkar has left cricket. Now India must win or lose without him, without the barometer of his achievement there for his team to measure up to. And I mean no disrespect to Tendulkar in saying I think this is good for cricket and its Indian fans. Because maybe, just maybe, we can now start watching the game without that pulsing desire for India, and only India, to win. Maybe we will find our way (back?) to being fans—not just of Indian cricket, but of cricket itself.

And in that spirit, let me spell out what that might mean over the next couple of months. Consider first some of the sheer talent, outside of the Indian team, that will be on display.

South Africa has two run-makers for whom ‘prolific’ might no longer suffice as an adjective. Hashim Amla actually has a higher strike rate and much higher average than that celebrated maestro of the limited-over game, Chris Gayle of the West Indies. And AB de Villiers recently pummelled a record-breaking century of breathtakingly innovative ferocity. Complementing those two are the stylist JP Duminy and the remarkable fast bowlers Dale Steyn and Morne Morkel, besides several other solid cricketers.

Australia has likely the world’s most destructive opener in Davey Warner, and a fellow called Steve Smith who’s in a Bradman-like phase of his career right now. There’s also an endless stream of fast bowlers, so much so that some who didn’t make the Cup squad—think James Pattinson—would walk into any team in the world.

Bangladesh’s Shakib Al Hasan is one of the world’s best all-rounders, a man who has scored plenty of runs and taken bunches of wickets in match after match. Tamim Iqbal, when in the mood, can tear a match open off his own bat, and Mahmudullah has quietly had himself a very fine several months.

Ireland counts on the O’Brien brothers to make them a competitive side. The younger one, the red-haired swashbuckler Kevin, still owns the record for the swiftest World Cup century, a magnum opus that anchored the highest successful World Cup chase.

Today’s West Indies team is certainly a pale imitation of their forebears who won the 1975 and 1979 Cups, but I anticipate magic from at least two of their men. Kemar Roach is out-and-out fast and I have the oddest feeling his time to make a mark on the game has come. At his best, Darren Bravo is a smooth run-machine who too, I suspect, is itching to prove a point.

And I really like New Zealand. They have smashers in Corey Anderson, Brendon McCullum, Grant Elliott, and Ross Taylor, with wicketkeeper Luke Ronchi as insurance. They have arguably the best young batsman in the world today, Kane Williamson. They have two incisive fast men in Tim Southee and Trent Boult. But for me what’s best about them is that they field like men possessed, taking spectacular catches routinely but also regularly creating wicket-taking opportunities out of thin air.

These are some of the men whose fortunes I’ll be following.

Consider now that it’s always possible for one of the lesser teams to spring a surprise or two and eliminate one of the big guns. Nearly every year, an unexpected Cinderella turn is what makes the US’s ‘March Madness’ college basketball tournament so thrilling to follow. Kenya, for one, has done that in the cricket World Cup. In 1996, they stunned the West Indies in a league game; in 2003, they actually made their way into the semi-finals. With some luck and more inspiration, something like that will happen this year too. Afghanistan, a team of never-say-die scrappers from a country that’s gone bananas over cricket, is my Cinderella pick. But I think Ireland might do some damage too. And I’d love to see Scotland pulling off an upset or two as well.

All this, and plenty more besides, is what I’m looking forward to between now and the end of March. And let me say it: I honestly don’t care how India does. I just want to experience a memorable tournament filled with dazzling performances and nail-biting games.

But in this first World Cup in a generation without Tendulkar, I am picking a winner. You heard it here first: the World Cup will be won by a country that has never won it before. They will win playing brave and positive cricket, filled to the brim with flair, imagination and sparkle. Their victory will be good for cricket.