Ghosts of the FTII Agitation

Bollywood, intolerance and the consequences of taking art and culture so casually 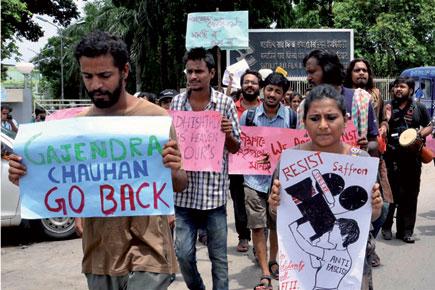 Soon after the Paris terror attacks, there was the predictable old refrain making the rounds—that if the majority of Muslims are moderate, then they must speak louder so that their voices are heard relentlessly against those of fundamentalists. This is also a line echoed by the Hindu religious right for some time. In irony that takes a full circle to come biting, the Bharatiya Janata Party (BJP), assailed by charges of creating a climate of intolerance, now finds itself in the shoes of the moderate Muslim.

Aggregated over the last one year, the rantings of Hindu fundamentalists like Giriraj Kishore, Yogi Adityanath, Sakshi Maharaj or Tathagata Roy have created a PR disaster that the Government is only beginning to comprehend. And now unless every moderate in the BJP keeps asking these people to shut up, they are damned just by association.

Aamir Khan might not be right about the state of the country when it comes to tolerance. His wife’s fears are certainly exaggerated when she ponders over moving away from India. But it is a real emotion whether the BJP likes it or not. What is someone to do if he or she feels this fear? No one arrives at it through a process of reasoning. It is an instinct that kicks in, given a subjective evaluation of a situation. People who know there are no ghosts are still afraid of the dark.

The BJP would do well to ponder how Bollywood superstars got into this issue. They are, after all, part of an industry famous for being silent on politics. But two of the most popular Indian stars, Shah Rukh Khan and Aamir Khan, have voiced their concerns. The opinions of actors are not necessarily the most astute or clever but they influence millions. When writers return their awards, it does not matter as much because to the vast majority of the country they are irrelevant.

You can trace the fear in the film fraternity to the FTII agitation, the first tinder of the present fire. What was a favour to a political lackey showed just how casually the Government took art and culture in the country. Not just the art circuit, even mainstream filmmakers, not already beholden to the Government, would have been disturbed by the appointment of Gajendra Chauhan. Just recently, FTII students who protested at a film festival in Goa were arrested. How does the government imagine such news is received in a film industry which is so intricately connected to the institute? What would be the drawing room conversations that directors, producers and actors have when students of cinema are arrested?

When Culture Minister Mahesh Sharma uses words like ‘cultural cleansing’ and says that the Bible and Qur’an are ‘not central to the soul of India in same the way as Gita and Ramayana are’, then even if his is a stray voice it is the one that defines the threat. General statements of reassurance by others in the party mean next to nothing without reprimands which carry a name along with it. When other BJP ministers say ‘We can’t be intolerant because tolerance is in our DNA’, they should also add ‘Mahesh Sharma is wrong’. It might be slightly more convincing then.