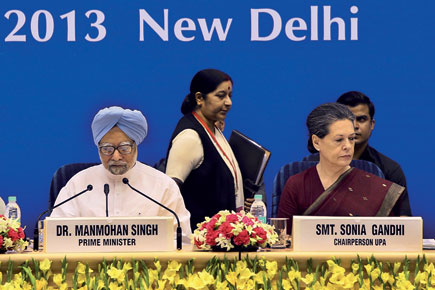 
You mighat have heard of the woman who made a call to Attorney General Goolam Vahanvati and, introducing herself as Sonia Gandhi, professed disappointment in his performance on, among other things, the coal block allocation case. Since an Attorney General’s anguish at being ticked off by a non-existent boss is never taken frivolously, imagine if the Prime Minister was so affected that he decided to call a convention of chief ministers to discuss how to deal with the pressing issue of hoax callers. And then, say, the Chief Minister of Gujarat and a few other rebels refuse to turn up while the others use it as a public relations exercise to spout platitudes and questionable achievements. What those present do not do, however, is come to a consensus on how to fix the problem, agreeing on only one thing— that the responsibility for all hoax calls must rest on the telephone line.

That, in short, happens to be the approach of the National Integration Council (NIC) to communal riots. The NIC is among the many good-intentioned purposeless tokenisms we have. This one goes all the way back to Jawaharlal Nehru’s time. From 1962 to 2013—that is, 51 years—it has met exactly 16 times. That doesn’t seem like a lot and going by the history of post-Independence communal conflicts, it is pretty clear how useless the NIC has been. Integration councils of a sort can in fact actually work if, instead of being top-down intellectual foreplay, they are sensibly placed where the tension is. Like the Mohalla Committees which were set up in Mumbai after the riots of 1992-93. It has been one of the principal reasons for riots not happening in the city again.

But when a bunch of ministers and eminent citizens come together once in a while for tea and biscuits, you will get what you got—the din of empty vessels making the most noises. This time the amusement came in the form of unanimity being only on social media as a culprit in communal conflicts. The Prime Minister asked for a check on misuse of the medium and pointed to the circulation of fake videos creating hatred between communities in Muzaffarnagar. An IANS report listed six chief ministers as echoing his concern and spelling out numerous ways to regulate and control social media.

Since the average age of all of these ministers would be somewhere in the sixties, you can excuse their having little clue on the subject. Riots have been happening in India before social media was in any human being’s imagination. As far back as 1893, Hindus and Muslims were at each other’s throats in Mumbai over the issue of cow protection. In these past nine years or so, the age of social networking in India, the frequency of communal clashes has gone down.

There is also the question of how exactly anyone would control social media. Short of setting up a police state, there is no way to do it and whatever else Manmohan Singh might be, he is no Stalin. Any attempt at control will inevitably backfire because the instrument of that control, the police, are as ignorant as politicians about this medium. That was how the Maharashtra Police found themselves in ridicule after they arrested two girls from Palghar in the outskirts of Mumbai under Section 66A of the IT Act for a harmless Facebook post on Bal Thackeray’s funeral. It is hard for the State to distinguish between misuse and free speech. It will always confuse the two, often deliberately.

Punishing the misuse instead of pre-emptive regulation of the medium is still a better idea. The act is then at least open to public evaluation. No one is going to allege a violation of human rights if someone who circulated fake videos to fan a riot is arrested. But doing things like asking internet service providers to design programs to spot fake videos is hallucination. It is something Albert Einstein couldn’t do if he were reborn tomorrow—the video clip doesn’t know that it is fake.