Call of the Zealot

Is it that the politics of the twenty-first century will be determined not by race or religion but by wealth? 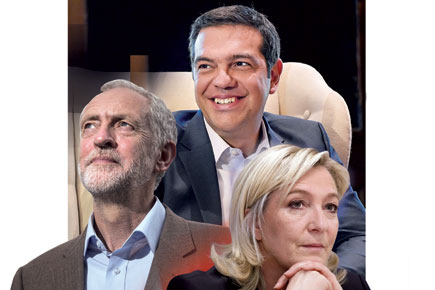 Maybe it is time to re-read the old ghost story, for the spectre we thought had been exorcised by history has returned to haunt Europe. As if words like Syriza and Podemos are not enough to bring out the possibilities of radicalised fantasies in a continent of resentment, here comes another tieless revolutionary in tweeds, promising an England free of ravenous bankers and pro-rich toffs talking austerity.

There are many reasons that explain the rise of Jeremy Corbyn, the new Labour leader rising from the wreckage of a party that was consistently losing England. And some are purely English. His predecessor, who lost the last General Election so badly after a campaign that oscillated between comedy and boredom, could not energise the base or himself in spite of moving farther to the left not out of some ideological conviction but because of his inherent inability to define himself when people only wanted clear choices.

The other obvious British reason is the regressive politics of the left after Tony Blair, whose legacy in today’s Labour still lies unclaimed. Blair was the last idyll-breaker among socialists. The New Labour, in action, was Thatcherism with a dash of compassion, and its sociology drawn from Amitai Etzioni’s communitarianism and Anthony Giddens’ Third Way. He was the one who de-trade-unionised Labour, and, in a hierarchical society like Britain, he made the party bridge the classes.

Still, the ascent of Corbyn is more than the story of a party returning to radicalism, as there has been no other leader to re-imagine the left. He is another inevitability in the age of resentment. It is an age where the book you re-read is not Adam Smith’s The Wealth of Nations but Thomas Piketty’s Capital in the Twenty-First Century. It is an age where the pinstriped Masters of the Universe, after the short-lived set back of the Crash, are back in power, their bonuses almost recession proof. He could be a troglodyte of ideology, but he does not look incongruous in a world where the richer countries are no longer a natural home for refugees brutalised by radical Islamism and dictatorships. In an unequal world, he looks as saleable as Alexis Tsipras. In this world, the tribe of Corbyn would tell you, austerity is a weapon of mass subjugation used by the privileged against the poor.

It is an alluring dialectic of dispossession that suits the street fighter of the radical left.

It is the underdog that sustains the politics of extremism, whether left or right. In Europe today, the far left is a viable political option because the economic disparity—manifested most starkly in white-collar urban poverty—is getting worse. From education to housing, a vast section is being relegated to ghettos, and the politics of affluence breeds anger. The new revolutionary on the left side of the argument, whether it is Tsipras or Corbyn, is reckless and charismatic. He simplifies the economic argument into neat slogans that tap the anger and anxieties of those who are losing the survival struggle. There is no difference between the politics of alarmism and what we call populism, and the new radical embodies the uses of exaggeration. It is the real that gets exaggerated.

It is the extremist who is setting the tone of argument, as caricaturist, provocateur, anarchist, and the harvester of disillusion. And for the Right explosion, just listen to Marine Le Pen of the National Front in France, whose shrillness has the power to turn Gallic exceptionalism—what a De Gaulle would have expressed with greater sophistication—into xenophobia. In Britain, UKIP is a louder, baser version of conservatism that is incompatible with the upper class understatement of a David Cameron. The spirit-of-the-soil right is a toxic blend of patriotism, nationalism, paranoia and hate. An American version is challenging the conservative establishment steeped in family entitlement and waffle. Donald Trump is no longer a joke, and what he says about immigrants and other usurpers of the American Dream is a fact amplified by a fantasising mind.

When the extremist is at play, the middle shrinks. The politics of raw emotionalism suspends reason—and curtails liberal instincts. And one theme that unites the zealots from the left as well as the right is capitalism. Is it that, in the end, the politics of the twenty-first century will be determined not by race or religion but by wealth? If so, where does the state stand—outside the marketplace or within it as a supervisor of fair deals? We know that when in crisis, even the capitalist wants the state to be socialist with a stimulus package. Still, the argument is not about capitalism versus socialism, which has already been made redundant by wealth-generated freedom—or what we call globalisation. It is about the political management of capital, and you don’t have to be a tieless socialist to articulate the uses of compassion and inclusion in a liberal democracy. Only a middle re-armed with a greater sense of moral responsibility can push the extremists to irrelevance.