Giving a platform to all kinds of artists, Berlin Artparasites employs art to communicate with strangers 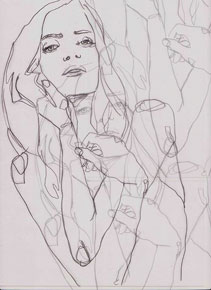 It is a human phenomenon to resonate with art, poetry, music- anything that explains what we cannot. Berlin Artparasites seeks to do exactly that- give its followers across the globe unintended answers, hope or just another perspective. Jovanny Varela Ferreyra, the Editor-in-chief and Art Curator for this Facebook page, explains the title ‘Artparasites’ exquisitely: “I enjoy throwing onto the world these wonderful seeds that I come across, with the hope that they grow & blossom elsewhere in another body”. Giving a platform to all kinds of artists, Berlin Artparasites employs art to communicate with strangers on social media, supplementing it with compelling text to exercise the empathetic power that these together carry. With its relatable posts, it has already saved some lives, transformed some others, and helps many survive on a regular basis through this expression of solidarity over experiences, emotions and a common cause.

Jovanny joined it as an intern when it was still an online magazine covering only the Berlin art scene, and by 2014, he was the Editor-in-chief. Since then, this 26 year-old communicator, improving the magazine’s social media presence, has been curating and sharing tasteful artwork and text on a Facebook page that now has over a million followers, more of whom follow their Instagram and Tumblr accounts.

Discussing the challenges involved in curating a page that combines artwork with text, Jovanny says he has to ensure that none nullifies the necessity of the other, especially when the text has strong emotional connotations. Often the text adds much more to the post than the image because maybe the image is difficult to read or too vague to understand. However, he believes both are integral because while the text in itself could be powerful, the art is what bolsters it to evoke a deeper emotion than what people would feel from simply reading a text. Once Jovanny gets either an appealing artwork or text, he searches for the other, such that they are perfectly complementary in making the post attractive and compelling. This art of filtering-being able to see little details in poetry and art and connecting them together, he believes is the main obstacle faced by those who have attempted to replicate the page, thus leaving Berlin Artparasites the only one of its kind. In his own words: “It is a creative endeavor to be able to curate and to select artwork and text- it requires creativity, sensitivity and depth of understanding. If you don’t have that and you put a random quote with the word ‘chair’ in it and look for an artwork that has a chair is it, that’s usually very easy and it’s not poetic, as opposed to finding somebody that is sitting on somebody’s chest, or somebody that’s sitting somewhere that they’re not supposed to be sitting.” Affirming that there have been several attempts to copy the page in the form of translations and regional branches, Jovanny reveals that they were largely unsuccessful because of people’s lack of understanding about curating and what works or doesn’t work on social media.

Ordinarily, the model employed by Berlin Artparasites would not work because if art is explained, it compromises the observer’s capacity to form his or her own interpretations about the piece. They have countered this by not using text that is too direct or dictates what the reader’s opinions or thoughts should be. The images chosen also have a wide range of understanding or interpretation. An artist himself, Jovanny learnt right away that the more information one gives about a particular painting, the more direct and constricted the image becomes. “I try most of the time to leave enough space for people to have their own opinions or their own details to add to the conversation. It’s more like, “Hey, I found this, I think it’s worthy of being shared or being talked about- let’s see what somebody else thinks.” Sometimes I am excited about a certain post only to see how people would react to it.” This diversity of interpretation implies that the content has to be universal- it might be written by a woman who lived two hundred years ago in another part of the world, but should reflect something about one’s own personal truth. How does the page achieve such universal appeal through diversity? Jovanny gives me an analogy that was given by Saul Williams, his favourite poet, in a similar context. “What we know about wells is that the deeper you dig into the ground, the more the source becomes the same. I just look for texts that speak about our humanity.”

It is interesting to note that artwork created by someone in one part of the globe is often interpreted by someone in another part of the globe, applied to his or her own context. Though the alternate perspective is refreshing and radically different, one often wonders about the artists’ side of the story- his or her intentions and motivations behind creating the composition. Jovanny has taken into account this interest of many followers to know the artist better, and notifies me of a database regarding information on the artists, which is in the process of getting built and will soon be functional on the Artparasites page. He articulates the reason for his actions beautifully: “Sometimes you listen to a particular song and you think to yourself, “Wow, I really like these lyrics! This is amazing!” and then you look up the song and the lyrics are completely different, or something else that’s disappointing. You thought for some time that the song was better than it actually was. I agree, sometimes the artist has possibly more depth than the work itself, but other times, I might see something that is beautiful that maybe the artist did not intend. I believe that once the artist has completed his painting and lets it go, it’s just a matter of perception. When you put your work in a different culture, a different society with different people where they have different symbolisms, everybody is going to perceive something different- there is no one universal meaning that every artwork has. I tend to go for the works of art that are fluid, that don’t mean something specific because I feel that as an audience, I like playing with their versatility and I like infusing my own experiences, my own stories within them. I like to see them as mirrors: what they mean to me, and what they would possibly mean to other people.”

Impossible to not notice are the emotional reactions on every post- people tag their loved ones in the comments, share their own stories, and heal through art as they identify with it. Each post expresses an array of complex emotions derived from Jovanny’s personal experiences. He’s observed human beings trying to fit into labels and compartmentalizing their lives, though reality is the complexity they shy away from. This page is his attempt to break away from, and add meaning to, the unrealistic life people exhibit on social media- sharing banal information, putting up only the highlights, glossing over everything else. “But there are low lights, which impact us tremendously, possibly even more than happiness. For example, the forest is green and there are birds and grass, but behind every log, there is a whole colony of little insects that are just hidden- there’s life underneath there. I like to uncover those little details about ourselves, hence the complex emotions.” These emotions expressed in the posts, in turn, have evoked memorable reactions from his followers. While some were extreme and humbling, such as receiving messages from teenagers who didn’t jump off a bridge because of something they saw on the page, some were commonplace yet enthralling to experience, such as people refreshing long-forgotten memories due to a certain post. Jovanny recalls one such reaction soon after he started experimenting with the Facebook posts: “There was this post- a poem about the way you should kiss her. It took you through the motions as if it was a dance; it was pretty much advice for how to kiss. There was a 50-something year old woman from Netherlands who commented, sharing a story about her life- she mentioned her first kiss from her first love and how it’s still so vivid in her memory, and how she remembered the wind that day, the park, the flowers, the birds chirping, and this happened decades ago. It was so touching to have somebody of that age, having a memory through this post and sharing it with people.”

Jovanny Varela Ferreyra’s greatest success lies in making art more approachable for a million people, such that it resonates with them in their personal lives. His greatest pride is that Artparasites cannot really be counted as a part of the art world he is used to- a world that is academic, conceptual, involves politics and million dollar paintings, and does not communicate with the common man. Art could be and should do greater than what it is doing, and this page exemplifies it can.