An Excursion into Evil

...or why Indian history is so short on tyrants. 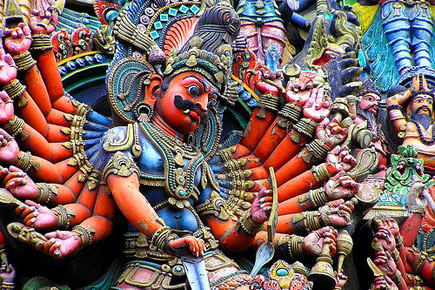 …or why the vast swathe of Indian history is so short on tyrants.


…or why the vast swathe of Indian history is so short on tyrants.

Apparently the world around us is embodied in the language we use. Among the most frequently cited instances of this is Inuit (the language of the Eskimos), which apparently has several words for snow, but we can do better by recounting the words most north Indian languages use for lentils (urad, moong, masur, tuwar, arhar and chana are the ones I am familiar with but I am sure there are others). No other culture places a similar emphasis on dal and hence no language grouping outside India has ever conceived a similarly extensive vocabulary for lentils.

This is fairly straightforward, but things get interesting when we ask if our language affects our perception of the world. And since perception is what constitutes the world we live in, could it ever be the case that the language we learn is what determines our world? What if the fact that a culture uses a single word for lentils implies that urad and chana dal taste the same for everyone within that culture? This would seem an absurd claim, but recent research has shown there may be something to it.

Stanford University researcher Lera Broditsky did not quite expect such an answer when she began looking at the question: “I set out to show that language didn’t affect perception, but I found exactly the opposite. It turns out that languages meddle in very low-level aspects of perception, and without our knowledge or consent shape the very nuts and bolts of how we see the world.’’

In a 2007 paper she and her collaborators found that Russians are better than others at telling apart a certain kind of dark blue simply because their language has a specific word for the colour. According to the paper, “Unlike English, Russian makes an obligatory distinction between lighter blues (‘goluboy’) and darker blues (‘siniy’). Like other basic color words, ‘siniy’ and ‘goluboy’ tend to be learned early by Russian children…We found that Russian speakers were faster to discriminate two colors… (one siniy and the other goluboy) than if the two colors were… (both siniy or both goluboy)… English speakers… did not show a category advantage under any condition. These results demonstrate that categories in language can affect performance of basic perceptual color discrimination tasks… Our results suggest that linguistic representations normally meddle in even surprisingly simple objective perceptual decisions.’’

This is true of most north Indian languages, and I expect south India wouldn’t have an equivalent of evil as an absolute either. Hindi has the achcha–bura (good-bad) dichotomy but not good and evil. The words we use: bura (bad), dusht (wicked), paapi (sinful) just do not embody the idea of evil as something beyond the pale, something absolutely irredeemable.

Poet and translator AK Ramanujan had concluded in his essay ‘Is There an Indian Way of Thinking?’ that while the West deals in moral absolutes, our morality is contextual; the same action can be good or bad depending on the context. Ramanujan’s conclusion is my starting point: how does our lack of moral absolutes and, hence, knowledge of evil shape our world?

The evidence that we cannot conceive of evil lies in our popular culture. If we want to really demarcate Bollywood from Hollywood, the one character we should focus on is the villain. Hindi cinema—and again I think this would apply to cinema in the South as well—has never been able to conceive of a character who is irredeemably evil. Our villains always have an element of buffoonery in them, even Gabbar Singh.

Or consider mythology. Our paradigm for the battle between good and bad is the Ramayana. But Ravana is no ‘evil’ counterpart of the ‘good’ Rama; he is a learned man and a wise king. He does not seek the extermination of a race, he is a man led astray by his love and lust for a married woman, and that is the best we can do where evil is concerned.

It is then worth asking whether our inability to conceive of evil actually implies that it does not manifest itself in our lives as it does in the West. A look at our history supports the case. We lack personages that match the great tyrants other parts of the world have thrown up. Through our history the best we have been able to do is Aurangzeb, but born into a Semitic faith he was still of India and as a tyrant he left much to be desired.

I speak of tyrants because tyranny and evil are interrelated. Tyranny may not be practised in the name of evil but it is the existence of such evil that allows those working for the ‘good’ to use any means possible to prevent it. Just in the twentieth century, various parts of the world have produced men such as Hitler, Stalin, Mao or Pol Pot (Marxism may be godless but it is born of a duality that contrasts a Marxist heaven against the hell of other systems and permits all means including the extermination of millions that will allow the advent of this heaven.) On a lesser scale, South America and Africa have thrown up their own tyrants, but who do we have?

An Indira Gandhi and her Emergency, disturbing though it was, hardly make the annals of evil. Even our neighbours are similarly circumscribed despite their claims to being an Islamic Republic. Compared to the Arab world, Pakistan has managed rulers who are more buffoons than tyrants. Even in our daily life we don’t have madmen who walk into schools and shoot children at random.

However, intimations of duality may finally be creeping into our worldview. Take the nation state for one: because we see it as an absolute, we justify everything in its name, hence Kashmir and the Northeast. Hindutva, which is an attempt to semitise Hinduism, for another, hence also Narendra Modi. These intimations of duality are spreading with the knowledge of the English language, which incorporates them within its structure.

This is now affecting the very sources of our worldview. Ashok Banker’s otherwise racy version of the Ramayana ends up portraying Ravana as the dark lord, more Darth Vader or Sauron than the Ravana of Valmiki or Tulsidas. To my knowledge this has never been done before. Could it then be that the very language that allows us to discuss the question of evil actually brings it into existence for us? Could we then say that for us evil lurks in the knowledge and spread of English?