On Planet Kejriwal, martyrdom, no matter however stage- managed, is a prerequisite for further growth 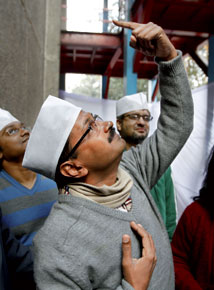 On Planet Kejriwal, martyrdom, no matter however stage- managed, is a prerequisite for further growth

The death of the comic strip regime is a familiar sight in the history of resistance. The story always begins as a romance of the amateur in an arena dominated by calcified totems of power. Our story of revolution too comes with many adjectives, and all of them, invariably, are a celebration of ‘We the People’. And the people, on their part, find in the first tentative steps of the revolutionaries leaps of hope, the change they have been waiting for. Politics with a difference is all the more beguiling because the so-called mainstream is everything that the worst instincts of democracy can offer. Promises of power from below suddenly sound authentic in a country of ventriloquists, and politics ceases to be the privilege of professionals. For the perennial harrumphers of middle class drawing rooms, this is the kind of revolution that awakens their conscience—and makes them stakeholders in politics. The new debunker in the fray, the outsider untainted by politics as usual, is the one who will be doing the job for them, the job of civic cleansing. The stage for the new redeemer of a squandered system is set by disillusion, defeatism and desperation. Anger provides the extra ballast to the insurgency of the amateur.

Arvind Kejriwal began in the depths of national impatience.

The fall of Chief Minister Kejriwal is a parable of power and simulated martyrdom. You may argue that in politics, certain failures are grander than successes—those magnificent failures of leaders who refuse to give up their argument with the future. When the AAP government fell in Delhi, it was not exactly a fall for the believers; it was martyrdom of the noblest. For them, it was an inevitable end to the revolutionary who would not abandon the revolution for the rewards of office. He was, in the iconography of the AAP-struck, one of those rare dreamers for whom power was a permanent struggle, and the street was where destiny was decided. He was the lone man in the corridor, vulnerable and defenceless against his tormentors, status- quoists in starched cotton from both sides of the political aisle. Power did not break his conversation with the people—or his war against Authority. If the ideal was denied to him, he would rather quit the game than hang on. After all, Delhi was nothing more than the nearest way-station on the long road to Ruritania. Or so went the lamentations of those who are still swayed by the Legend of Kejriwal.

The untimely funeral in Delhi was too bathetic to fit such hosannas. The evolutionary story of Kejriwal in power was different from the usual script of the revolutionary passage in which the romance of liberation ends up as a horror show. The standard Third World despot’s biography—anti-colonialist, freedom fighter, liberator, tyrant—or Communism in power was its vindication on a historic scale. Kejriwal was different, and almost trivial. At the time of his fall, he was a bad joke—and an expensive one as well. It was swaraj, his credo, political scatology. For a while there was that sight of a Chief Minister as satyagrahi, and the return-to-the-struggle moment carried no conviction because it was circus as escapism. The hero of the earlier street fighting days suddenly looked like a badly-sketched comic character, and the road show was, in the end, an admission of his own redundancy as a responsible ruler. Even as Kejriwal descended into his comic strip existence, his Sancho Panza was defying civility as well as dignity in public life by playing the misplaced vigilante. The final retreat in the name of Lokpal was unavoidable because no man in power could have ruled a state on the strength of abstractions alone. Details terrified Chief Minister Kejriwal.

The abstractions were beguiling, even lofty. Fantasists always use ‘people’ as a prefix to power. Kejriwal’s planetary system is built on an empowering soundbite: every man is a government. In its maddening possibilities, the line can be a Gandhian answer to India’s overstretched democracy. Or a Marxian alternative to the commodification of freedom. Or a libertarian rejoinder to the intrusive, hyperactive state. Or pretty anarchic. Kejriwal’s ‘swaraj’ is all of these and none of these. It is the faith of the righteous, unalterable, and quite granite in its certainties. In his own words, it is common sense: ‘It is now obvious that we have no control over the entire system. We cannot do anything against government employees. We have no say in government policies. There is no participation in lawmaking, little control over the Parliament or the vidhan sabhas. Our natural resources such as water, forest and land are being thoughtlessly sold off. We have no control over that either. Is this democracy? Is democracy all about casting your vote once in five years and then letting these parties and their leaders rule the roost? This cannot be a democracy. There is something wrong somewhere. The basic problem in our country is that there is no democracy. We want democracy. The politics of voting once in five years is no longer acceptable. The people want a direct participation in power. The people shall take decisions, and politicians and officials will have to implement them.’

The sheer banality of this passage from his book Swaraj should not be a reason for underestimating the power of trivia in a nation of disillusion. So his Republic of Eternal Bliss, where every citizen is the arbiter of his relationship with the State, appeals to the marginalised as well as the privileged—the natural constituency of AAP. His idea of decentralisation may be simplistic as a slogan, but it is a negation of constitutionalism—and of the institutional symmetry on which civil societies are built. In Kejriwal’s India, power multiplies from the village, and the empowered masses will have one Jehovah to look upon: the most righteous of them all, the most wisest of them all, the most purest of them all. The cult of the Infallible One is an inevitable outcome in a movement driven by the self-righteous. On Planet Kejriwal, martyrdom, no matter however stage-managed, is a prerequisite for further growth. That is why AAP’s parliamentary fight is the next stage of Kejriwal’s freedom struggle—and another step backward for India.

That said, Kejriwal’s a-plague-on-both- your-houses is a lost moment of the Third Way. In the post-Thatcher, post-Reagan West, there was that period of less ideology and more ideas. In the US, there was no idea thief smarter than Bill Clinton, the New Democrat, who internalised the best of Reaganism and captured the vast middle between the traditional Left and Right. Across the Atlantic, Tony Blair’s New Labour was socialism with a dash of Thatcherism. Sociology gurus like Anthony Giddens, author of the influential The Third Way: The Renewal of Social Democracy, provided the intellectual framework for a centrist political alternative. Soon, in the talking shops of political ideas, society and community would become operative words. Amitai Etzioni, the highest apostle of communitarianism, even went to the extent of producing a global model of governance based on the best of neo-conservatism and liberalism. His From Empire to Community became mandatory reading for every Third Way aspirant. But politics continued to be idea proof in India.

It is still, though we are irredeemably caught between two imperfections. On the Centre- Left, the Congress is certainly not the party with India on its mind. It has already lost the political as well as the economic argument, which doesn’t mean that the BJP has won it, in spite of Narendra Modi. It is not the party that matters now but its prime ministerial candidate who has turned this election into a referendum on the Idea of Modi. His Gujarat Model may be a Dengist echo of ‘It is glorious to be rich’, but his party has not fully abandoned the virtues of cow-dung capitalism. The Right should be the ideal winner of the economic argument. Not yet here. There could be a third way, different from the one chosen by the provincialists from the heartland and the red fossils from Bengal and Kerala. It is not the way of Arvind Kejriwal either. Do we really need the alternative of a pre-modern moralist?