Why is Bollywood so besotted with style? 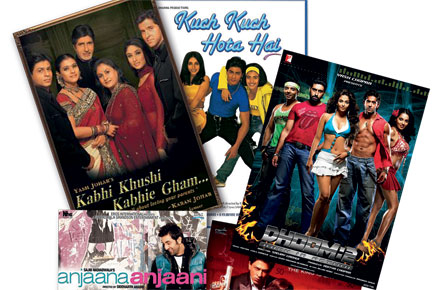 Why is Bollywood so besotted with style?


When did styling become a substitute for script?  I wondered that as I watched Abbas-Mustan’s Players, and found myself marvelling more at the sequined jackets and cool ripped jeans than the incoherent script. This is happening to me more often—in Don 2, Aisha, Anjaana Anjaani, Pyaar Impossible! or Main Aurr Mrs Khanna, I followed the clothes more closely than the plot.  Shah Rukh Khan’s superbly styled outfits, Sonam Kapoor’s nail colour and Kareena Kapoor’s jackets made a bigger impression.

British costume designer Sandy Powell, who has eight Oscar nominations and three wins, was once asked what is key to the art of costume design for film. She replied: “What you are doing is helping create a character. You’re hoping to make a character believable. I think it’s equally important that costumes don’t distract.  It would be wrong if someone went to a film and all they could remember were the costumes.”

In Bollywood, the opposite seems true. Hindi movies and fashion have been joined at the hip since the heroines in Yash Chopra’s Waqt set the nation’s style quotient in the 1960s. But rarely has film fashion and styling been so prominent as now. In 1993, I did an article on the emergence of the Bollywood designer. There were a handful of names: Manish Malhotra, Neeta Lulla, Anna Singh. The costume budgets for an A-list star ranged from Rs 2 lakh to Rs 5 lakh. I wrote breathlessly about Sridevi’s feathered look in Chandramukhi costing Rs 34, 000 and Madhuri Dixit’s Rs 50,000 outfits in Rajkumar. Today, a stylist might find a nice pair of designer shoes for that money. But even back then, Bhanu Athaiya, Oscar-winner and grand dame of costume designers, was dismissive.  “Costume designing is an art,” she said, “what is happening here is only a fashion parade.”

Over the next two decades, films like Dil To Pagal Hai, Kuch Kuch Hota Hai, Kabhi Khushi Kabhie Gham, Dil Chahta Hai and later Dhoom 2 cemented the importance of styling. Good clothes were an added bonus that enhanced the pleasure of these over-blown fantasies—I still remember Shah Rukh Khan’s transparent shirts in the song Sooraj Hua Maddham and Aishwarya Rai’s blue bikini top in Dhoom 2. Of course, then Bollywood took it way too far.  Designers became stars and styling became overpowering. Sonam Kapoor, a fashion goddess who occasionally acts, was the outcome of a natural progression.

I asked Karan Johar, the architect of contemporary Bollywood style (even as an assistant director on Dilwale Dulhania Le Jayenge, he was doing costumes), if he ever frets about the revolution that he has wrought. He said: “Nine out of ten movies get it all wrong because everyone is aspiring and emulating but not thinking. It’s all very well to reference a fashion magazine or video, but finally you have to look at who is wearing the clothes. The problem for us is that little is just little. It’s never a lot. We don’t know how to strike a balance, and as a people, we fall very easily into the wannabe space. It’s very important to resist that.”

Currently directing a campus romance called Student of the Year, Karan said that he has toned down his fashion quotient. “When I started, in-your-face fashion was a novelty, but now it is about character dressing.  Besides, I am a little more aesthetically sound than others. I might slip on content, but one thing I can’t be accused of is being tacky.”

And this year, the 18th Screen Awards finally instituted the Best Costume category (Filmfare introduced it in 1995). The award went to Niharika Khan and Moiz Kapadia for The Dirty Picture—a film in which the styling jumped at you only because the character and story demanded it. I hope we see more work like this.