A Montage Made in Memory 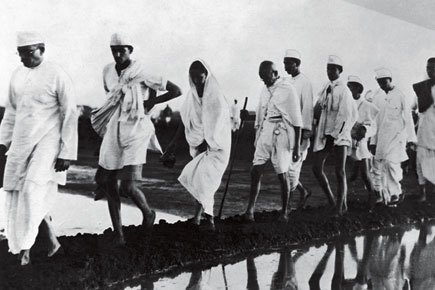 Freedom for me is never an abstract concept reduced to a glossary of philosophical terms. I resist the idea of freedom when I see it presented as a thesaurus of words or even as a collection of indicators by economists. They somehow seem to think numbers can represent freedom and that there is a notion of freedom like the concept of Gross National Happiness. Freedom to me is embodied. It must smell, taste, evoke memories and convey the sense of an animation film. It must demand storytelling. It must have that bitter-sweet feeling that some concepts and memories have that gives them a different sense of life and living. Freedom, as one of my friends said, should be a menu card of memories. It should smell sweet, or bubble like wine, and yet have that touch of lemon pickles, that sharp, singular tang that keeps you alert for any dilution of the taste you enjoy. Freedom has to combine myth and everydayness and summon the storyteller.

Freedom for me is a collage of photographs, pictures which evoke myths and memories. If one talks of India’s freedom, my first recollection is the Salt March. It evokes the very semiotic of freedom, of vulnerable bodies articulating their world through their bodies, where every act of the body evokes the dreams of the body politic. The Dandi March conveys the epoch of freedom, that mix of vulnerability, and determination, courage and defiance which enacts the alphabet of freedom. It choreographs freedom by denying fear. The body becomes iconic of the concept as it challenges competing concepts of fear, repression and authoritarianism represented by the colonial power. In one more way it represents freedom to, for, and freedom against, freedom in all its dialects.

The next picture in my scrapbook of freedom is Nehru’s ‘Tryst with Destiny’ speech where he stands in Parliament, poignantly vulnerable, uttering the promissory notes of a nation before the Constituent Assembly. The voice trembles, pulses with emotion like a school boy reciting a speech. Freedom is always a promissory note of future actions and assertions of being.

I begin with Dandi March and Nehru’s speech because it evokes the iconic moments of Indian freedom for me. These moments are so choked with memory and yet so mixed that one does not know whether they are exclamation points or question marks. A word, a world which one wanted to celebrate and commemorate now becomes a ritual of interrogation. What happened to that freedom? Is India free? What new chapters have we added to the annals of freedom? Sixty-eight years of freedom evoke archives, accountant ledgers and history books to convey what meaning these years possess.

For me, the history of freedom begins with the body. Despite all the creativity of non-violence, freedom from the British was a costly affair. In terms of suffering, it was a genocidal moment, as Indian freedom was preceded by two genocides—the Partition, which cost a million lives, and the decisions around the Bengal Famine, in which 3 million people died. To use a term that became more banal after the Vietnam War, the body count of freedom was exorbitant. It is a pity that there is no tribunal for the British, because in their cunning antiseptic way, they were as genocidal as the Nazis. Imperialism is as bloodthirsty as fascism, and this is one of the great lessons of freedom.

If the body were the centre, the symbol of any embodied drama of freedom, then the Indian body politic has a bloody history. The bloody revolts of Telangana, the unending battles of the Northeast, the continual litany of dam displacement, the vivisectionist history of the Emergency which was a collage of violations of the body, the Bhopal gas tragedy, the Naxal era, the Bhagalpur blindings, the folklore of foeticide, the bloody battles of development from Narmada to Niyamgiri—each one was a chapter in which the body was raped, displaced, tortured, aborted, mauled, burnt, starved and triaged, making one wonder what freedom meant in those decades. If instead of development indicators preening themselves on morsels of progress, we had narratives of violence, the last few decades would have been seen as bloody.

Yet, that very same history of the body testifies to moments of freedom that would make any Indian proud. They might be movements of resistance as moments of freedom, but in those moments the body speaks eloquently. These are iconic moments to be retold. I pick a few that my memory treasures. The mothers of Manipur, the women of the Chipko Andolan hugging trees, Irom Sharmila battling the Armed Forces Special Powers Act with her ethical refusal of food, a younger generation protesting gang-rape and being hosed by water cannons of an idiot UPA regime, Jayaprakash Narayan defiant in jail, and the quiet silence of the Jal Samadhi of Narmada dam oustees—all these show that our tryst with destiny is still possible. There are another set of moments where freedom gets entrenched and democracy turns into a festival. The General Election after the Emergency where the people voted Indira Gandhi out and the poetic protests of the AAP movement before it went sour are pictures that haunt the imagination.

The body speaks in many dialects of freedom: Feminist, Ecological, Dalit, Youth, each asserting through bodily logic the language of freedom. Freedom becomes the right to walk the streets without fear, to dress as one likes and not to be susceptible to rape, the ease of holding your girlfriend’s hand without being harassed by vigilante squads, to write a book on sexuality without a majority censoring it, the right to dissent and celebrate eccentric ideas without a fatwa being hurled to threaten you. Freedom, as the Tribals of Niyamgiri showed, is the claim to a cosmos as commons, where your mountain is both myth and home, untouched by threats from corporations.

Freedom in that sense is Janus-faced. It is, as Amartya Sen would argue, a right to development, and as others would suggest, a right against development when it threatens a way of life. Freedom to and freedom for are in continual battles with freedom against tyranny and development. Freedom as a word has been diminished by the state which ushered in the repressive vocabulary of security, boundary and the dullness of official patriotism. It has taken us a long time to realise that freedom dressed in corsets and uniforms is a repressed freedom. We have still not realised that identity cannot be a calculator of freedom, that one can be Sikh and Indian, Mizo and Indian, Muslim and Indian and be doubly free. Identity is a statement of a free self and that is what makes it a marker of creativity.

Freedom might have its standards, but it cannot be a standardised word. It needs dialects, a front stage and a back stage, or as the novelist UR Ananthamurthy would say, a front yard and a backyard. It needs gossip, storytellers, translators, inventors. Freedom, as myth, has to be sustained through the rituals that myth demands to remain alive. Storytelling is as important as sacrifice.

An India caught in theories of development and seeking the ‘holy grail’ of modernity has discovered that freedom needs multiplicities of time. It recognises that the tribal, the peasant, the industrial and post-industrial worker all live in equally privileged zones of time. To privilege one time over the other is to warp freedom. The time warps of freedom create domains like progress and development which are as brutal as any utopia. To allow the tribal his freedom is to allow him access to his cosmos, his land, his language and his ancestors. Rights can be for isolated man, freedom invites the community. Development which displaces a tribal at best museumises him, and to museumise freedom is to emasculate it. Freedom to access multiplicities of time and the varieties of memory it entails creates diversity. Diversity is not about hierarchy of difference, but about the freedom that difference creates. This shows that in India, freedom is not that of the individual making isolated choices. Freedom is the availability of alternative worlds and alternative imaginations. Freedom perpetually needs a commons.

A world of choice evokes the freedom of the consumer. A world of alternatives embodies the freedom of a citizen in all his identities. Ethics, in elaborating the distinction between choice and alternatives, has showed the richness of difference between picking between two flavours of chips and dreaming of a few thousand varieties of rice.

Freedom in India is both paradigmatic and exemplary. It is a collection of iconic figures, legends like the Dalai Lama, the anonymous fisherman claiming the right to take on nuclear energy because it destroys his livelihood; it is the woman of Bhopal demanding justice beyond the rudiments of compensation. Freedom cannot be captured in some Maslowian hierarchy, moving up from the material to the spiritual. The history of protest has shown that food and ideas go together, that when a man says ‘food is God’, we must not forget he affirms God and food together. And yet democracy as a paradigm of freedom is strangely incomplete. It offers liberty to the official citizen and little to the marginals and informal society. Democracy does not recognise the citizenship of the nomad, the tribal, the displaced; and the paradigms of freedom remain episodic and electoral rather than everyday in content. Our elite has come to think of everyday freedom as anarchy or disorder. It wants trains in India to run on time but not lives to be lived out fully. Consumerism and middle-class ideas of development have no sense of freedom as an intrinsic part of justice.

We began with photographs, pictures of the Dandi March and Nehru’s historic speech as overtures to freedom. We will try to end this fragment with two equally evocative memories. The first is a picture of Narmada dam survivors soaked in water, reminding the country that they have been forgotten. As a picture, it is a reminder that a freedom that fails to remember only creates erasure and obsolescence. For freedom to be freedom, it has to be shared and it is this that the middle-class has forgotten, confusing mobility and aspiration for freedom. The battle of the Narmada survivors sitting in silence as the water sculpts their feet shows that amnesia destroys freedom, that freedom allows forgetting but not erasure and indifference.

Finally, one confronts the prospects of terror. The terrorist is always masked. It is as if he needs to be free to have a face. But the very facelessness of terrorism destroys the face-to-face nature of freedom. Terror demands anonymity just as freedom seeks an array of identities and dreams of self. The danger of terror in India is that it does not have to kill and maim the body because all it has to do is kill and maim the imagination. Terror is destroying the art of being free, substituting it with management ideologies and umbilical discourses on security and surveillance.

Terror immobilises freedom, especially its playfulness, its laughter, its sense of the future. India stands ethically immobilised between a fundamentalist idea of development and an undialogic sense of terror. If democracy is to succeed, then the Satyagrahi must come alive to face terror. In this lies the real poetics of a future where democracy as freedom can still makes sense.