A Media That Looks Away

Narendra Modi deservedly rouses cries for justice, but who will report the truth about Kamal Nath? 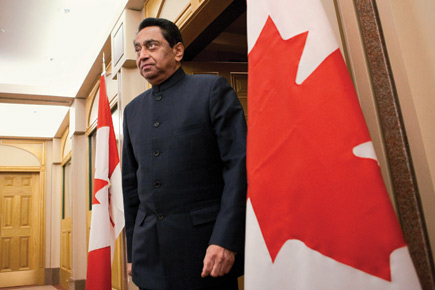 Narendra Modi deservedly rouses cries for justice, but who will report the truth about Kamal Nath?


I see an injustice. Even as the Indian media, rightly so, has been filled with reports of Gujarat Chief Minister Narendra Modi being questioned by the Supreme Court appointed Special Investigation Team, an event in Canada has gone unreported. The recent visit of Kamal Nath, Union minister of road transport and highways, to the country triggered the ire of Sikhs who have not forgotten his role in the 1984 massacres, when he was part of a mob that set afire two Sikhs within sight of Parliament at Rakabganj Gurdwara.

Surely the events in Canada were worth at least one news story, to say nothing of attracting the attention of India’s otherwise frenzied TV anchors. Robert Oliphant, Canadian MP and co-chair of the Canada-India forum of MPs, was quoted saying he chose not to attend a reception for Kamal Nath once he learnt of the man’s questionable character and allegations against him. Jack Layton, leader of the New Democrat Party, which controls two provinces in the country, issued a press release: ‘The New Democratic Party of Canada is concerned that a divisive and controversial Indian politician, Kamal Nath, has been invited to Canada… Out of respect for the Canadian Sikh community, I am urging my caucus not to attend events featuring Kamal Nath.’

Where, in all this, were the liberal South Asian voices from North America that were so easily mobilised against Narendra Modi? Why is there no coverage of the charges against Kamal Nath? Could it be that he does not attract the opprobrium that justly comes the way of Narendra Modi because Kamal Nath’s indictment leads to questions about the Congress that no one is willing to ask? Or is it because he remains an important news source for prominent TV and print journalists? To cite just one instance, when the UPA II Government was sworn in, many well-known TV anchors were willing to claim on the basis of their ‘sources’ that he was in the running for the post of finance minister at the very moment he was headed for a Cabinet demotion.

Over the past six years of Congress rule, not one story on Kamal Nath’s role in the riots has appeared in the Indian media. In their book, When a Tree Shook Delhi, Manoj Mitta and HS Phoolka say, ‘Having spent two hours with the mob in front of Rakabganj Gurdwara, having done nothing to help the two Sikhs lying in a critical condition, having allowed the mob and the police to carry on with their hostilities against the targeted community, Kamal Nath was clearly part of the problem, not the solution. The unanswered questions about his role in the Rakabganj Gurdwara episode might well hold the key to uncovering the high-level conspiracy behind the 1984 carnage.’ We all know where that road leads.

The oft cited reason within news organisations is that there is no case pending against him, but that is because no one has bothered to dig out the truth. Even the effete Nanavati Commission that inquired into the events of 1984 had no choice but to observe that Kamal Nath’s testimony was “vague” and “not consistent with the evidence” and also that his version of events was “a little strange”. This was in 2005, a partial indictment. The contradictions in the various testimonies before the commission are so glaring that a little bit of effort by an investigative journalist would easily uncover the truth. Yet, the same media people who have no problem seeing Modi for the villain he is, have actually been busy extolling the virtues of Kamal Nath first as commerce minister and now as transport minister.

The Gujarat CM’s overhyped record on development has been exposed through due scrutiny, but have you read even a single report on why Kamal Nath was not seen fit to continue as commerce minister?

Today, the campaign against Narendra Modi thankfully does not have a solely Muslim face. Activists, journalists and lawyers have come together in admirable fashion to ensure that someone in authority is held to account for the tragic events in Gujarat. But the no less horrific massacre of Sikhs in Delhi is unfortunately an issue alive only for Sikhs. I know of only one non-Sikh journalist who has consistently written about it, Manoj Mitta. For the large part, the quest for justice for victims of the 1984 riots has been effectively muzzled, an also-ran cause figuring as an addendum to the 2002 riots in Gujarat.