A Bad Joke and a Holy Pledge

When was the last time anyone heard Nationalist Congress Party Chief Sharad Pawar crack a joke? Now we know why. 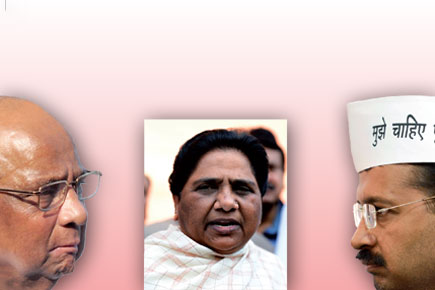 When was the last time anyone heard Nationalist Congress Party Chief Sharad Pawar crack a joke? Now we know why.


When was the last time anyone heard Nationalist Congress Party Chief Sharad Pawar crack a joke? Now we know why.

Because: a) no one can make out whether it is a joke or he is serious; and b) no matter which of the two it is, there is a strong possibility of his getting into a soup. On Sunday, while addressing a meeting of head- load workers in Navi Mumbai, he coolly advised them how to make the most of their votes. Speaking in Marathi, he said: “Elections were held on the same day in Satara and Mumbai the previous election. This time, however, it is on 7 April at Satara and 24 April here. So cast your vote for the clock (the NCP symbol) there and then come here and cast it again. But remember to wipe off the ink to avoid getting into trouble.” He did have a smile on his face as he said this. He also took a moment for a muted chuckle. Could he have been not joking? Could he have forgotten that over the past two decades, the Election Commission has cleaned up what used to be a fairly common practice? The opposition thinks he was dead serious and has complained to the Election Commission. The message for Pawar from this episode is to go back to his old dour self. An election is not the time to let loose one’s sense of humour, especially if no one is certain that is what it is.

There was no mirth in Rajasthan Chief Minister Vasundhara Raje as she twisted a dagger in Jaswant Singh’s wounds a day after he accused her of plotting to deny him a BJP nomination for Barmer. At a rally in the constituency along with Colonel Sonaram Chaudhury, the man who got the ticket, all that Raje had to offer Singh was a lesson in stoicism and obedience. The New Indian Express reports her as saying, “One should try to accept whatever the party does and should not leave it… During assembly elections, we gave a ticket to (Jaswant Singh’s son) Manvendra Singh in place of Zalim Singh from Shiv constituency in Barmer and Zalim Singh never complained to us…. rather he wholeheartedly supported the party’s candidate. One should learn from this.” Sage advice, perhaps, but completely wasted on someone who has already packed his bags and left the party.

If you are Mayawati, you hold the unique ability to not just call bandhs but also create a few out of thin air. On Wednesday, Mayawati was in her element in Haryana as she addressed two well-attended rallies, speaking on all the things she was expected to—attacking the Congress, attacking the BJP, portraying her party as the only voice of Dalits, railing against corruption, and so on. But a few days earlier, it was a different scene in Ranchi, Jharkhand, where she arrived expecting a 100,000-strong crowd eager to hear her. Instead, what lay before her were a few hundred men and women and wide empty carpets. Since there had to be a reason for such low numbers, Mayawati instantly deduced there must have been a bandh called by the opposition to prevent people from reaching the location. She duly informed the audience of this and congratulated them on defying the bandh. “You go back and tell those workers who could not come here that such antics [by the opposition] will continue,” she said. We don’t know what the audience thought of all this, but, as they say, repeat something often enough with a straight face and it becomes the truth.

Arvind Kejriwal announced on Tuesday during a speech at Varanasi that he would run against Modi. His promised referendum to take the decision was exactly two sentences long.

“Should I fight the election against Modiji ?” Chorus of ‘yes’ from audience.

“Should I fight the election against Modiji ?” Chorus of ‘yes’ from audience.

“I’ll fight the election against Modiji.”

A weekly column on election speeches