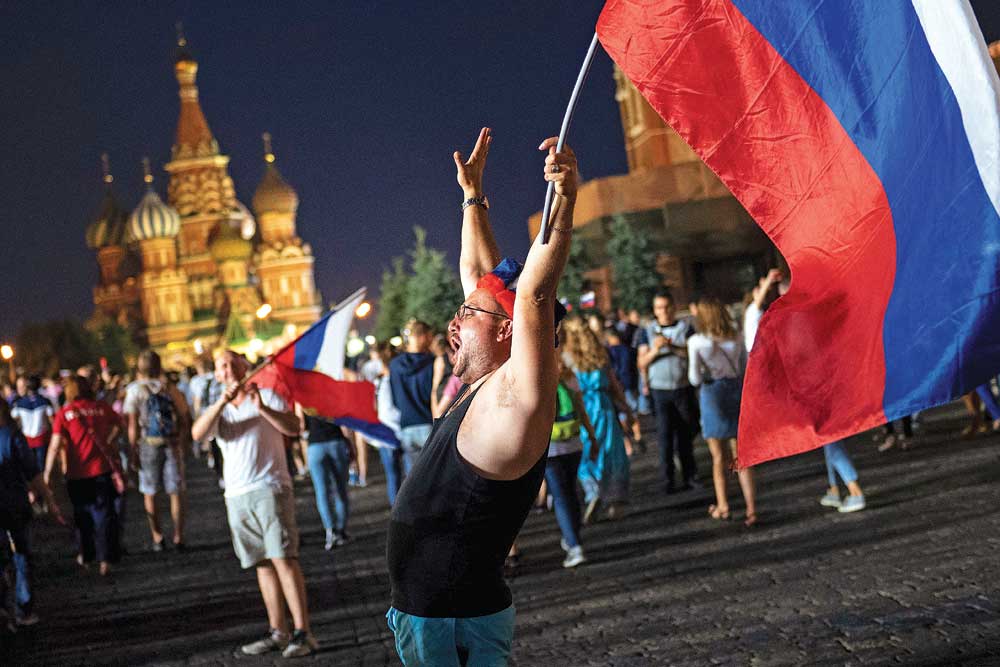 THOSE WHO WERE there claim that first the stadium shook; only then did the seismic waves of noise and love consume an entire city. But this story begins moments earlier, at the epicentre—a goalpost at the Luzhniki Stadium in Moscow—experiencing a few uneasy seconds of calm.

Under the goalpost, Igor Akinfeev is wiping his face. Perhaps those sticky black gloves are clearing droplets of sweat from the Russian goalkeeper’s eyelashes. Or, perhaps, those palms are simply hooding his vision from the on-coming penalty-taker, Spain’s Iago Aspas, who has begun his walk from the half-line. It’s hard to tell. But by the time Akinfeev—goalie, captain and hope of a nation—looks up from his fingers and places his hands on his hips, Aspas is already there, standing above a ball resting on a white spot.

Andrés Iniesta, who had kicked off the penalty shootout (and scored) after 120 minutes of football couldn’t decide this Round of 16 match between Russia and Spain, cannot bear to watch. Iniesta has turned his back on his huddled team and, seemingly, the rest of the country. But the country is watching and somehow doing more than that. Inside Luzhniki, 79,000 spectators are crying, clambering, stomping and soaking up the moment; their moment, a moment of history. Thunderous roars of ‘Ros! Si! Ya!’ clatter down on the pitch where the left-footed Aspas begins his motion towards the stationary ball. If he scores, Spain stay alive for another round of penalty shots. But if he misses, or if the spread-eagled Akinfeev saves, Russia stay alive in the World Cup. Their World Cup.

Aspas looks to the right of the keeper and runs the ball down the middle. Akinfeev has already dived right when he realises Aspas’ dummy. But through sheer resolve he wills his falling feet to stop the ball, which they do, as the toe of his left boot flicks it away from the net.

It has now been a few days since Russia, the lowest-ranked team at this World Cup and arguably the country with the least footballing pedigree to ever host an edition, knocked out heavyweights and 2010 champions, Spain, to reach the quarterfinals of a tournament that ‘half the country wasn’t aware of until it began’ (according to Russia’s coach Stanislas Cherchesov). Still, neither the Luzhniki arena nor the city of Moscow has since stopped rattling.

During the course of this tournament, Akinfeev’s Russia have achieved some remarkable World Cup firsts—winning the first two matches for the maiden time since 1966 (playing under the Soviet Union banner back then); proceeding to the knock-out stage for the first time since the fall of the USSR; contesting in their first- ever penalty shootout. All these firsts will, over time, help change the nation’s lukewarm attitude towards the game. But this football team’s greatest gift to the Russian masses goes well beyond football. The strongest aftershock of Russia’s win over Spain caused the country’s permissive class to spill out on to the streets, where they unleashed, city-wide, their idea of Russian pride.

Over the last few days, Russia, the country, has told us a story. In newspapers. On Twitter. Over the phone. Via Google-translated emails. The story is a happy one, of happy, loving Russians. Of a celebration so grand that those who witnessed it on the streets of Moscow believe they will never see the likes of it ever again; unless, of course, the Sbornaya (Russia’s national team) proceed even further. But to understand the significance of this outdoor party, we must travel back to its predecessor, its only predecessor—a Moscow party that occurred exactly ten years ago. As is the case with most public outbursts in Russia, this story too begins with the police.

In the summer of 2008, after the UEFA Champions League final between Manchester United and Chelsea ended at the Luzhniki Stadium (Russia’s first tryst with hosting a major football night), 40,000 spectators were led to the Red Square by Russia’s security forces. Within the confines of Moscow’s grandest plaza, the police and the army deployment told the fans that here, under the domes of the Kremlin, they could do what no one had done before—let their proverbial hair down. For however long they wanted. So, they did—40,000 men and women, mostly British, drank long and hard into the dizzy night, as the cops turned a blind eye. This celebration was watched by genuinely amused Muscovites, from their terraces and on television sets. At the time, it was the country’s largest, most free and most inebriated open-air party since World War II ended.

For the next ten years, that night, May 21st, 2008, was regarded as a beacon for public freedom in Russia. Football historian Simon Kuper wrote about the gravity of that dusk in Open’s World Cup special issue (‘The Last Glory’, June 18th, 2018). ‘One Russian security officer described working three consecutive sleepless nights around the [Champions League final] match. The day after, he slept until evening. He was woken by a phone call from a friend, who joked, “I have good news. From now on, the Champions League final will be held in Moscow every year.” And the official said, “I’d be very happy with that.”’ European football’s finest night never returned to Russia, but a decade later, the FIFA World Cup did.

Still, there were plenty of reasons for locals to be pessimistic— the most significant being that the Sbornaya just wasn’t good enough; present at the World Cup only due to a rigged bid and not skill. Also, Russia’s President Vladimir Putin famously didn’t participate in any pre-tournament PR exercises with the footballers—unlike, say, Nelson Mandela before South Africa hosted the 1995 rugby World Cup—distancing himself from a team commonly referred to as ‘the worst in Russia’s history’ and their expected group stage exit.

CRACKS OF HAPPINESS appeared here and there once Russia 2018 began. After the hosts defeated Saudi Arabia in the opening game on June 14th (Putin was in the stands), videos emerged of hundreds of fans screaming ‘Ros! Si! Ya!’ as they descended an escalator into Novolobodskaya metro station. According to acquaintances and journalists present in Russia, the locals were keen to piggyback any team doing well to have fun. ‘Enjoy this while it lasts,’ seemed to be their chorus. ‘The Portuguese are dancing in the metro? Dance along. The Argentines are singing in the plazas? Sing along. The Australians are drinking under the Marx statue? Drink along. The cops aren’t going to look away once the World Cup ends.’

When Akinfeev’s side beat Egypt in the following match to prolong their stay for at least one knockout match, the first wave of solely Russian street parties splashed. These celebrations were concentrated in the centre of the capital, where small groups draped in Russian flags flocked about the Bolshoi Theatre late into the Moscow night. They weren’t long lived, for Russia’s next match proved to be a bitter dose of reality—Sbornaya had promptly lost to the first decent team they met—in Uruguay.

The dam of Russia’s love—for its team, and more importantly, for itself—broke on July 1st. But not before an excruciating match, both to play and watch. The drudgery lasted over two hours, a period in which Spain passed the ball 1,107 times, mostly in small, personal triangles, giving La Roja 75 per cent of the possession. Meanwhile, the yawning Russians (the players, that is) sat back and defended, hoping to move the game ahead in counter-attacks. The game didn’t move and neither would’ve the score, if not for an own goal (conceded by Russia’s Sergei Ignashevich) and a penalty (converted by Russia’s Artem Dzyuba), both in the first half. There should’ve been widespread relief when the final whistle blew an hour-and-a-half later. But it was overwhelmed by the host country’s hopes and ambitions.

The Russians didn’t miss a single penalty from the spot. Spain missed twice—the second miss giving a country divided by its politics its biggest reason to come together and party as one. About 200,000 Russians drained out of their houses in Moscow and flooded the inner concentric circles of the city. But, as several news articles have suggested, ‘it felt like all 144 million Russians were around the Kremlin, celebrating each other, celebrating their country, partying like there was no tomorrow.’ This, then, was modern Russia’s largest ever spontaneous celebration, a celebration that began at 7:45 pm on a Sunday night and carried on well past dawn on Monday and into the weekday’s working hours.

Fathers, mothers, uncles and aunts climbed out of the windows of cars driven by teenage children, drumming their hands on the sunroofs. There’s a photograph of a man perched atop a lamp-post, precariously balanced on his feet as his hands wave a Russian flag. The traffic violations, the noise—nothing alarmed Russia’s feared security forces. Not even the copious amounts of open-container alcohol that it took to fuel such a celebration. No one was arrested.

By midnight, it is reported that many Muscovites had passed out on the streets, still wrapped in their jerseys and flags. But the sea of humanity didn’t ebb until the next day. Here’s an enlightening paragraph from a report in The Guardian: ‘Did you touch the man-sized stuffed bear passed halfway round the city by the time dawn came? See that drunk guy hug the cop so hard they both fell over? Muscovites were still going hard long after the sun came up. Is anyone even going to work today?’

This ‘today’ was in fact Russia’s promised tomorrow, ushered in, somehow, by a sport that Russians weren’t supposed to care about; and by a team that is said to be the worst this country has ever produced.