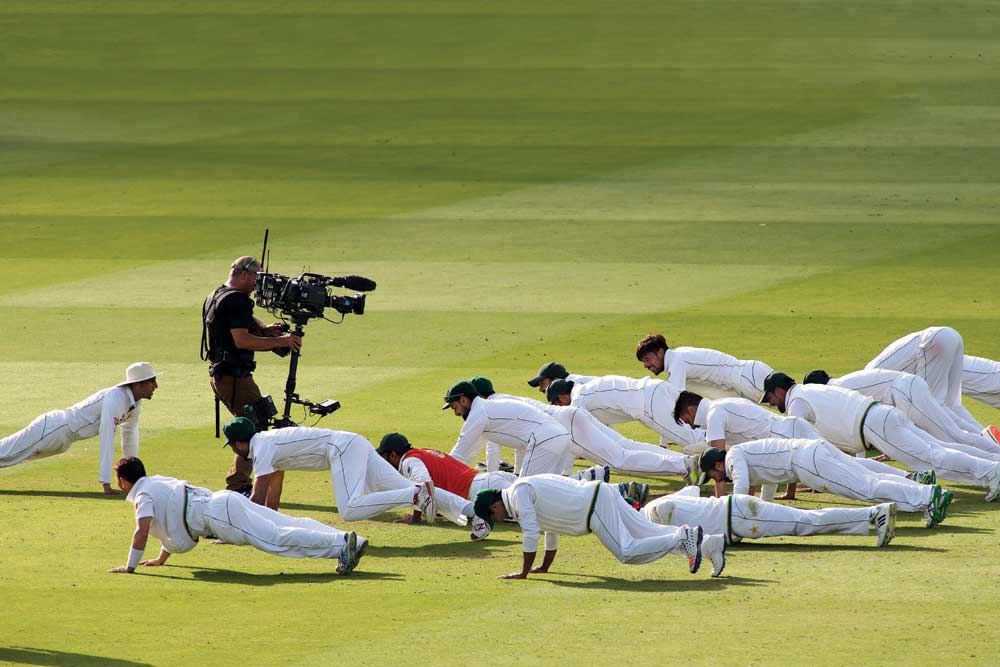 THESE ARE DAYS in which Indians should admire their neighbouring cousins, doffing topis to them for jobs well done. After a 10-year campaign of hectic hygiene evangelism, Bangladesh has declared that it is now a country entirely free of open-air defecation (even as two-thirds of the people of much richer India continue to move their bowels al fresco).

To the unflushing west, Pakistan—which hasn’t played a Test series at home since 2009—defeated England at Lord’s in one of the tautest Test matches in recent memory. Its team came to Lord’s as a twitching underdog; it left with a military swagger, right down to pushups on the holy green, as well as salutes and other playful martial affectations.

Bangladesh’s achievement is the greater, of course, in the grand scheme of things. I shall leave commentary on that, however, to social scientists. Instead, I shall offer my extended thoughts on the cricket played by Pakistan. Indoor plumbing in Bangladesh is a remarkable thing, but it doesn’t make the heart race quite as swiftly as Pakistani leg-spin does.

IT SHOULD COME as no surprise that Pakistan bowled itself to victory at Lord’s. That is the Pakistani way. It loves taking 20 wickets, often at a rout.

Of course, no team can win a Test without bowling its opponents out twice, and even when a historically mediocre bowling side like India wins a Test match, it does so by winkling out 20 wickets. (The rare exceptions are successful fourth-innings run- chases that come after a declaration, as happened in Port of Spain in 1976.) India takes 20 wickets much less often than it would like to, which is why it has won barely 26 per cent of all its Tests, while drawing 42 per cent, more than any other Test side, and losing 32 per cent.

Pakistan’s win percentage, by contrast, is 32; they win every third Test they play. Only Australia, England and South Africa have better win records, of which England’s, in particular, was inflated by playing weak teams from India and New Zealand from the 1930s to the 1970s. For decades, Indian teams went to England like lambs to the slaughter. (Australia, for its part, didn’t bother playing India all that much between the late 1940s and the late 1970s.)

Pakistan’s triumph over England at Lord’s was its 127th win in 396 Tests. India has won 127, too, but it has played 99 more Tests than Pakistan.

This modest sprinkling of statistics is enough to show that Pakistan’s bowling wins more matches than India’s does, and that the reason Pakistan has a markedly better Test record is because of its more incisive bowlers. Sachin Tendulkar has won fewer Tests for India off his meaty blade than the humble Iqbal Qasim or Aqib Javed have done with the ball for Pakistan.

It is a sobering truth for batting-besotted India that Rahat Ali, the unremarkable third seamer in the current Pakistan Test XI, would walk into the Indian squad. It doesn’t compensate to say that there are four opening batsmen in India who would all open for Pakistan. A team with strong bowling and modest batting is more likely to win a Test than one with strong batting and modest bowling. In a poor batting line-up, someone comes good from time to time, as Misbah-ul-Haq did in Pakistan’s first innings at Lord’s, giving the bowlers a total to defend. A poor bowling attack, on the other hand, will rarely run through an opposing lineup on decent wickets—which is why an unseemly proportion of India’s wins have come on doctored tracks at home, and so very few when playing away.

Conventional wisdom associates Pakistan with fast bowling and India with spinners. But Pakistan’s spinners, in truth, have won as many Tests for their country as Indian spinners have done—and their record away from home is better than that of India’s tweakers. The great Anil Kumble never won India a Test outside the Subcontinent the way Yasir Shah routed England at Lord’s.

Bowling is much more of a solitary art. And so a generation of great Pakistani bowlers came together, their talent and resourcefulness finding expression on the cricket field, a rare arena where non-haraam showmanship was permitted

Pakistan did not have a single out-and-out fast bowler until Imran Khan arrived in the mid-1970s. After his coming, the place has been awash with them—awash, in fact, with gloriously inventive and aggressive bowlers of all kinds, pace and spin. One wonders what gives rise to these bowlers. Remember, before Imran there was only the genius of Fazal Mahmood, and a number of decent (but not earth-shattering) spinners and trundlers. Intikhab Alam and Mushtaq Mohammad, stalwarts from the late 1960s to the mid-1970s, were fine bowlers, but hardly all-time greats. The same is true for Sarfraz Nawaz, the medium- pacer. (Karsan Ghavri had a better strike-rate than Sarfraz.)

There is no doubt that Imran gave Pakistan the gift of bowling aggression matched with a patriotic passion. Everyone emulated him. But were there wider forces at work?

The first real flowering of Pakistani bowling happened during the regime of General Zia-ul-Haq, and has continued ever since. Zia’s major contribution to Pakistan was the radical Islamisation of state and society. The country became under him an increasingly joyless place, where artistry and creativity and fun were frowned upon. Cricket became one of the few arenas where Pakistani creativity—curbed in much of civic life—could flourish unmolested. Cricket, in fact, became the activity into which a nation’s imaginative energy was passionately channelled.

It is easier to be creative as a bowler in the relatively unstructured and ramshackle world of Pakistani cricket than as a batsman. Batting, for all the glories of a few celebrated unorthodox prodigies, is a matter of rigid technique, schooling, and supervision. Bowling is much more of a solitary art, a private ingenuity. And so a generation of great Pakistani bowlers came together, their talent and resourcefulness finding expression on the cricket field, a rare arena where non-haraam showmanship was permitted. They became the creative icons of an increasingly arid land, where religious and social suffocation was rampant.

India cannot recreate those conditions at home. They are unique to Pakistan. What it can do is re-evaluate its spiritual approach to Test cricket, which has for too long held that the negative value of a loss is far greater than the positive value of a win. Indian captains have habitually sought to foreclose the possibility of defeat, even if it has meant shutting off avenues to victory.

The Pakistani way of cricket is to ask, ‘Which four bowlers should we pick so that we can scythe through the opposition?’ A long tail is not anathema in Pakistan the way it is in India. Stuart Binny, a man who can bat a bit and bowl a bit—or, put another way, a man who will win India a match with neither his batting nor his bowling—would never be picked by Pakistan. It doesn’t matter if eight, nine, 10 and Jack are rabbits with the bat if they are, with ball in hand, wicket-taking demons.

I’d like Virat Kohli to study replays of this last Lord’s Test and then say to himself, ‘I want India to play like that. I want India to want to win as badly as Pakistan does.’ He can then do a few pushups in front of the mirror and plot a bowling revolution. For in cricket, at least—and only in cricket—we should all gather together and say, ‘Pakistan zindabad’