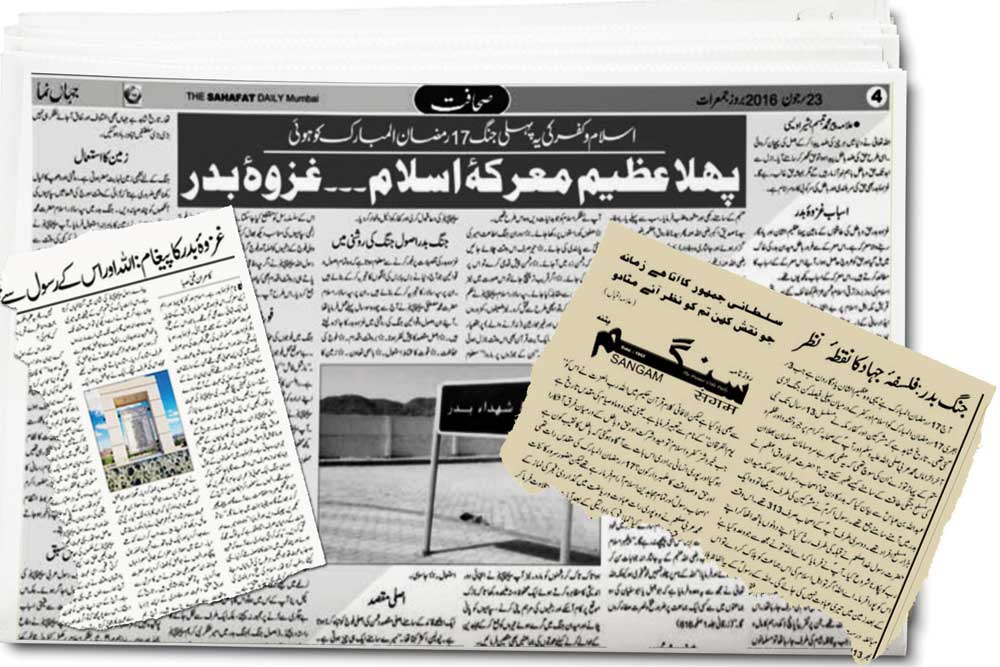 ONE OF THE reasons the Taliban, and for that matter all other jihadist outfits, have consistently refused to stop fighting during the fasting month of Ramzan is that Ghazwa-e-Badr, the first war of Islam led by Prophet Muhammad, was fought in this pious month. On the 17th day of Ramzan in the second year of Hijri, corresponding to 13 March 624 CE, an army led by the Prophet waged war against the non-Muslims of Mecca at Badr, situated in present-day western Saudi Arabia. To mark the occasion this year, many Urdu newspapers in India paid tribute to this battle on 23 June, the 17th day of Ramzan, the Muslim month of fasting that which began on 7 June this year.

In its edition of 23 June, Roznama Sangam, a leading Urdu newspaper published from Patna since 1952, had an editorial titled, ‘Jang-e-Badr: Falsfa-e-Jihad ka Nuqta-e-Nazr’, which translates to ‘the Battle of Badr: The Standpoint of the Philosophy of Jihad’. It notes: ‘This is the great memorable day when the first decisive war between Islam and Kufr [unbelief] was fought…’ The Urdu daily observed: ‘The prophet looked at the polytheists who were one thousand armed men. On the other hand, his men were 313… He raised his both hands and started calling his Lord. He said: O Allah, fulfil the promise you have made to me; O Allah, if you allow this group of inhabitants of Islam to be killed, then after it, prayers for you will cease on this earth.’ The editorial reminds readers: ‘This handful of 313 Muslims forced the army of the infidels of Mecca to lick dust in the field of Badr. This first battle is the point of the beginning of the philosophy of jihad.’

With the rise of Islamic State (ISIS) in Syria, many Indian Muslims have been attracted to the call for jihad, which makes it a sensitive issue and a concern for the security of India. But the Patna-based daily deemed it appropriate to laud the battle, noting: ‘1,400 years have passed since the War of Badr but its memory refreshes the faith and belief of Muslims even today.’ The piece also observes that the Qur’an praises Ghazwa-e-Badr as ‘Yaum-ul-Furqan’, or a day that differentiates between truth and falsehood.

The editorial describes it as a war between good and bad, polytheism and tauheed (Islamic monotheism), Islam and Kufr, truth and falsehood. It speaks of how Prophet Muhammad woke up his fighters in the morning of 17 Ramzan and ‘after the morning prayers recited the [Quranic] verses on jihad and delivered such a soul-stirring motivational speech that droplets and droplets of blood in the veins of the head-sacrificers of Islam became the ocean of energy and force, turning into stormy waves.’ Roznama Sangam is not the only example of this.

On 23 June, Roznama Inquilab, an Urdu daily that’s influential in Maharashtra, also published an article written by Kamran Ghani Saba to mark Ghazwa-e-Badr. This write-up preaches jihad and suicide attacks, and advocates killing anyone for blasphemy against Prophet Muhammad. At the Battle of Badr, it notes, many Muslims fought against their ‘extremely close relatives’ who had not converted to Islam. It praises their ‘spirit of jihad’, noting an incident as per which a companion of the Prophet, Umar bin Jam, was eating dates when he heard the Prophet’s call and plunged headlong into a suicide mission, saying to himself: “Wow, wow, between me and paradise, the only time [left to elapse is the period before] they kill me.” And he was indeed killed.

IT SHOULD BE borne in mind that the principle of blasphemy against Prophet Muhammad often invites murder by almost all Islamic groups, Shia or Sunni, Barelvi or Deobandi. For example, Imam Khomeini of Iran issued a fatwa (decree) of death against Salman Rushdie. Two brothers owing allegiance to Al-Qaeda in the Arabian Peninsula (AQAP) shot dead the editors of Charlie Hebdo in Paris. Malik Mumtaz Qadri, an elite Pakistani commando owing allegiance to the Barelvi group Dawat-e-Islami, assassinated Punjab’s liberal governor Salman Taseer for advocating the reform of blasphemy laws. By the same theological token, Islamic clerics of Bijnor led by Maulana Anwarul Haq Sadiq publicly issued a reward of Rs 51 lakh for anyone who could kill Kamlesh Tiwari, whether in prison or outside, for blasphemy.

The Roznama Inquilab article lauds two ‘kamsin bachche’ (kids), M’az bin Umar and M’az Ufr, for attacking Abu Jehl, a noted critic of Prophet Muhammad, for blasphemy. The daily praises the two as ‘nanhe mujahid ’(child fighters) and notes that their love for the Prophet is missing from the life of Muslims in present times. The Urdu newspaper reminds its readers: ‘Ghazwa-e-Badr was not simply a war between Islam and Kufr, but there was an eternal message in it for the world…’ It urges readers to follow this message, observing: ‘We will have to rise above mere verbal claims and advance at the practical level. Allah’s aid will be available to us.’

On the same day, Roznama Sahafat, which is published from Mumbai, New Delhi and Lucknow, carried a half-page article written by Allama Pir Muhammad Tabassum Bashir Owaisi, titled: ‘The First War between Islam and Kufr Took Place on 17th Ramzan: The First Battle of Islam, Ghazwa-e-Badr.’ The author’s title of ‘Pir’ suggests that he could be a Sufi. ‘Allah has ensured the identification of everything by birthing its opposite [such as Islam being the opposite of Kufr],’ the article says, adding, ‘Ghazwa-e- Badr too is the second name for the crushing of the falsehood and advancement of the truth.’ It goes into great details of the battle and the Muslim strategy for it.

Observing that the inhabitants of Mecca were persecuting and occupying the property of new converts to Islam, the author writes: ‘Therefore, it was necessary to teach them a lesson. Therefore, Muslims attacked many caravans of the Quraysh [dominant tribe of Mecca] and the Prophet, peace be upon him, used to himself go out with Muslims [to attack the Meccan traders going to Syria]. He used to chase and attack the caravans and seize their goods. Otherwise too, the infidels are enemies of Allah and their properties… are Halal [permissible as per Shariah] for Allah’s friends, in other words, for Muslims.’ The author cites Islamic jurists as saying that for Muslims the ‘most legitimate halaal thing’ is maal- e-ghanimat (goods seized from non-Muslims), followed by profits earned from trade, especially of clothes, followed by profits from agricultural activities, followed by income from work done by one’s own hand—in that order.

Allama Pir Owaisi—who quotes German war theorist Clausewitz, French military general Napoleon and Chinese war strategist Sun Tzu in his article about the need for offensive war—goes on to unwittingly present an image of Muslims as robbers out to ambush infidels, noting: ‘[The Prophet]… and his companions used to lie in wait for the trading caravans [of Meccans to pass by].’ The author motivates Muslims to sacrifice their lives for the cause of jihad by quoting Saad bin M’az, who he writes told the prophet on the eve of Ghazwa-e-Badr: “If you order us to jump into the ocean, we all will jump into the ocean and none of us will be left behind.” The long article also uses a couplet to exhort Muslims to pursue the cause: ‘Create the environment of Badr, because the angels for your aid; Will come down, in rows after rows even now.’