We have made most of our heroes question-proof. We have made them private collections, labelled and indexed. Thoughts on Ambedkar’s 125th anniversary 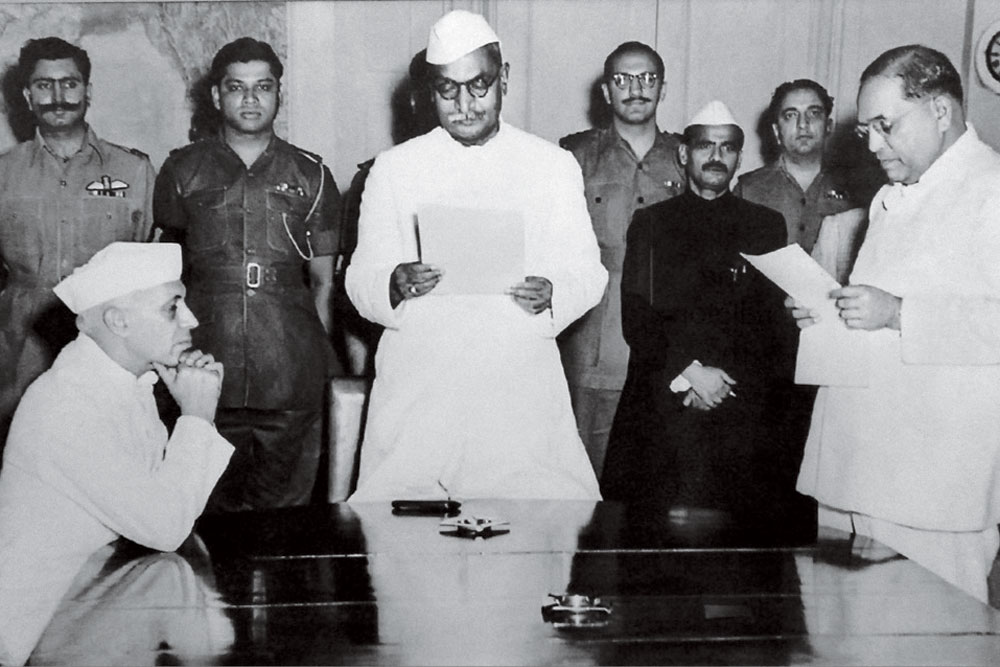 A PANTHEON IS A sealed testament of divinity, and every nation needs one. It is where the mortals in power, whose frailties require a continuous supply of models from the past, come to pray. It is where history is a closed house, a temple that abhors questions. It is also the site where national memories are replaced by the mythologies of heroic men, one-dimensional men, reassembled to suit the smallest of our minds. It is where desperate politicians and their ‘intellectual’ henchmen gatecrash and turn history into a dispute over ownership. A national pantheon is convenient veneration in countries with low self-esteem.

We have a pretty crowded one, and not a single day passes without new struggles for entry. If we are lazy enough to leave the fortunes of our heroes—and ‘villains’—to the whims of gatecrashers, history will be a terrible place to trespass. We have already made most of our heroes question-proof; we have made them private collections, labelled and indexed. And the dispute over their ownership has become the most disgusting political theatre of our time. It is the dispute of scavengers who are in search of icons that can be polished and sold in the marketplace of slogans.

Such slogans have already done severe injustice to the so-called national treasure. Deification closes the windows, and man-made gods are safer in darkness because the last traces of a human existence, seldom suitable for sloganeers, become invisible. Gandhi is an obvious victim, though it must be said that he does not have much market value in politics today. He is more an invocation than a commitment. His owners become Gandhians only when they are offended by a biographer who has trespassed, or when their ownership is challenged by a rival group. Otherwise, he remains less utilised by realpolitik and more sought after by storytellers.

Nehru is still hot, and the family will not let him go. And the family-controlled party gets really upset when others claim him, and when he is subjected to comparative studies in nation building. The family copyright over the Nehru papers itself is a sign of why possession is actually paranoia, and why politicians dread the idea of gods being humanised. Reassessments and reinterpretation unsettle them, for what they want is the certainty of divinity, saleable and sacred.

We could go on with examples from the glossary of almost every political formation. In the south it is divinity as explosive kitsch; it is the sight of private mythologies seeking validation in the street. What makes the politics of a suitable pantheon such a dishonest exercise is the disconnect between the idol, the ideal and the slogan. That is one reason why biographers in India find it difficult—and at times even dangerous—to redeem historical figures from sloganeers. Here, the pantheon is the easily accessible destination for hagiographers and the scavengers I mentioned earlier. The vigilantes watching deviations and transgressions are also a protected group.

It is in this context that we put BR Ambedkar on the cover to mark his 125th anniversary. As you read this, I am sure, someone, somewhere, is creating his own little Ambedkar that will fit into the size of his mind, provincial and exclusivist. One of the most understudied thinkers of our history, he continues to remain larger than the parts of the Ambedkar legend that are being appropriated by desperate politics. The iconography of Ambedkar has reduced the complexities of his thoughts, the breadth of his world view, his searing humanism, into monochromatic political idioms. Competitive Ambedkerites are out there, suddenly blinded by the aura of Babasaheb, multiplying his divinity.

Our cover is far from a commemorative ritual in worn-out words that you find in journalism-as- usual. It will have a life beyond this issue of the magazine as one of the finest narrative essays on a less understood Indian. Pratap Bhanu Mehta, whose earlier contributions to the magazine include a majestic essay on Nehru, redeems Ambedkar from his worshippers and other sundry seekers and tells us how the story of this lone figure from the forgotten corridors of our history is a complex narrative of India’s engagement with ideas as varied as nationalism, democracy, justice, non-violence, republicanism, Hinduism, and even wealth. One of India’s foremost public thinkers brings Ambedkar closer to our conscience, makes the contested sites of history more comprehensible—and challenges the certainties of the pantheon.