To create a Swacch Bharat, you need a broom, say the people of Delhi. What is the appeal of the broom about? 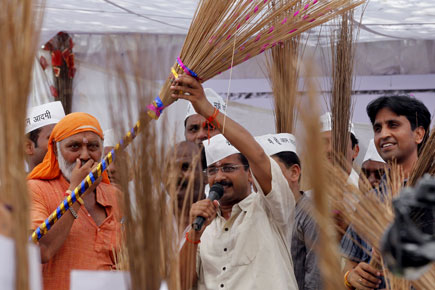 What’s in a broom, that odd and not particularly attractive icon, which has made it smell sweeter than other election symbols? As Delhi ushers in an unprecedented win for its next Chief Minister, victorious Aam Aadmi Party (AAP) leader Arvind Kejriwal has reportedly spread his Common Man’s touch, escalating sales and the price of the humble jhadu (several news outlets reports prices doubling, going up to Rs 120 in the capital’s Gole Market, this morning). The news is awash with a reedy, brown sea, held aloft. Strange trophy? Perhaps a broom is more tangible than a lotus or a hand, more real to its adopters than the promise of better times in a distant future: that daily use cleaning implement which Everyman and Everywoman wields, or wants to have everyone wield. Made up of sticks and bound up with rope: here is the pledge of the masses to someone who purports to speak for them. And of those who are more fortunate to the ones who have to use a broom to earn a living.

The jhadu, which sprouted on the Gandhi-Kejriwal AAP caps everywhere this winter in Delhi, is an unlikely symbol of power. (The equivalent for others might be a sack of gold, if we were to be that literal.) How it even came to be connected to politics is the recent story of Indian politics. The broom was selected as election symbol from three shortlisted symbols, says Cheena Maharaj today; a member of the Valmiki community who Kejriwal coopted after close to 70 years of Congress loyalty (born Kishanpal Magwana), the priest is chief patron of AAP’s SC/ ST wing and predicted that the broom would rally members of his community (India TV interview, 10 February). When the election symbol was assigned in 2013, cementing the emergence of AAP as a serious independent party, following Kejriwal’s split with Gandhian Anna Hazare, its members were jubilant. ‘With the Broom which symbolizes dignity of labour, the party hopes to clean the filth which has permeated our government and our legislature. The country needs a clean sweep of its corrupted mainstream political parties,’ stated a release (July 2013). They even had to fight to keep their brooms, when a regional party in Uttar Pradesh, Naitik Party, sought to establish a prior claim and campaign with the symbol in 2014.

We have laughed at the ‘mufflerman’ in the past for some pretty un-cool moves—and he has certainly not failed to provide us entertainment, whether wrapped up in the equally visible symbolism of his humble streetgear under a car or while surrendering power after 49 days—but his ordinary little electoral symbol has heralded what they call the AAP sweep. ‘Modi ji wants a #SwachhBharat and #AAP has the broom’ say the Twitterati. Indeed, among the Modi campaign’s more popular moves has been making a mass cleanup a priority—cleanliness is the one message NRIs and Indians can agree on, the most evident sign of progress on an immediate level. It is also the one goal that everyone should agree on, ideally.

Not everyone, of course; the muffler wins and loses some battles. What does a BJP-friendly shopowner think of broom fever? ‘This is Delhi, this is not Bihar, how can it be? People are not that sold,’ says Pankaj Gupta, a staunch BJP supporter who owns my local store in Vasant Vihar. Sceptical friends-of-friends send a picture of a dog dressed in Kejriwal-styled streetwear when I ask what they think of the broom; ‘Is AAP ki kashish gonna be the new national anthem?’ they ask.

What about Gandhi, would he have enjoyed Kejriwal, I wonder. Undoubtedly. The Mahatma took salt, that daily commodity which was eroding Indian autonomy, and made a symbol of it, of our freedom. Today, wearing his cap, is his unlikely successor, taking his message one earnest and very literal step closer to the masses. The question is: will this broom become a Swachh Bharat one?