Taslima Nasrin: ‘Without sexual freedom women will never get equality’ 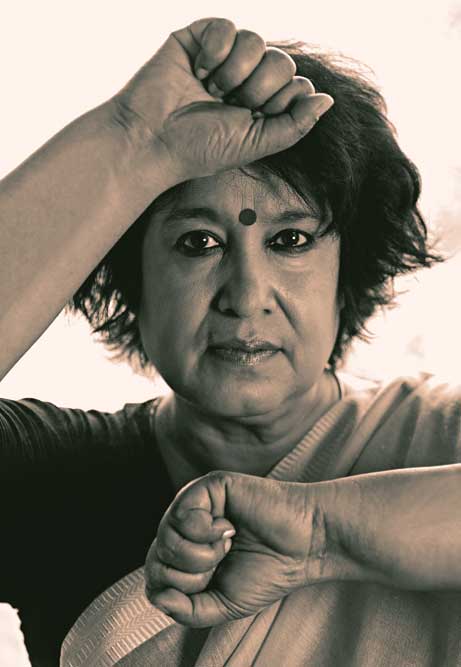 WHAT DOES IT mean to live with the knowledge that people want to kill you? Or to reserve a hotel room under an alias? Or to be the incognito ‘mystery speaker’ on the brochures of literature festivals? What does it feel like to have been thrown out of one’s country? How does one plan a day when an armed cop is stationed at your door, or when your outstations travels need to be cleared by the police? What is it like to be Taslima Nasrin?

When we meet, Nasrin is just recovering from a severe throat infection and her voice is no stronger than a rasp. Her hair is dishevelled, she is clad in shorts and a t-shirt. She’s been advised bed rest but when was she one to follow the doctor’s orders? Drinking green tea and picking on a platter of freshly cut fruits, she answers my question—about the cop at the door—with a chuckle, “I am used to it. I don’t feel bad because it is needed. Many people want to kill me. Now even Europe is not safe and I had huge security there. I’ve been living like this. It is accepting reality. If you get lots of death threats, you feel comfortable with this sort of people protecting you.”

Exiled in 1994, and unable to return to her home country of Bangladesh, with the advantage of hindsight, would she have done anything differently? “I’d do the same thing because it was very important to tell that not only culture, but customs and religion also oppress women,” says Nasrin, who describes herself as ‘author, secular humanist, feminist and physician’. Her location on Twitter says ‘everywhere’; it is little surprise, given that she has often said, “I do not believe in national boundaries. I do not believe in religion. I feel the world is my place.”

Her early stirrings against oppression can now be read in Split a Life (Hamish Hamilton; 503 pages; Rs 599). Translated from the Bengali version by Maharghya Chakraborty, Split is part three of her seven-volume autobiography. Given the length, she rightly likens it to an “Indian epic”. Without doubt, Nasrin has had an epic life. She has written 40 books in Bengali, which include poetry, essays, novels and autobiography series. Her works have been translated into 30 languages. As her website reads, ‘Because of her thoughts and ideas she has been banned, blacklisted and banished from Bengal, both from Bangladesh and West Bengal part of India. She has been prevented by the authorities from returning to her country since 1994, and to West Bengal since 2007.’

When the fatwa was issued against her in 1994, the Western media was quick to anoint the then 32-year-old-doctor-turned- writer ‘the Salman Rushdie of Bangladesh’. While Lajja brought her into international focus, she was known in her home country since the late 80s as a ‘poet, columnist and women’s rights advocate—growing ever more notorious for her sexual subject- matter, her criticisms of male-dominated Bangladeshi society and of the Islamic religion, and her own multiple marriages’. (London Review of Books, September 1994). There were those in Bangladesh who did feel Nasrin was capturing attention at the expense of other leftists/liberal forces. Some women’s rights groups also felt her provocations and irreverence were hampering rather than helping the feminist cause in their country.

But does the life of any 55-year-old, however interesting, warrant a seven-part memoir? No. And the act of writing is an act of self-indulgence. Split is highly readable in bits, but one wishes it were snappier, less detailed. Sentences meander and often lose their way. It’s 500 pages and only covers two decades.

Even while a reader will often lose patience with the text, there is no denying the fact that Nasrin herself is an author who stands apart. Today, words like ‘brave’ and ‘fearless’ are thrown around like grains to propitiate pigeons. But unlike many others, Nasrin deserves those titles. Neither a provocateur nor a revolutionary, she is the quintessential rebel. She uses her pen to rise up against the status quo. She has never apologised to appease her enemies. Like a crusader, she has campaigned for change, and has impacted the thoughts of others. The role of a dissident is one she has embraced in her writings and speeches, life choices and decisions. Even the tome on her centre table is none other than a bound collection of Charlie Hebdo comics!

I believe feminism is a radical notion that says women are human beings. But if your religion says women are inferior beings and you say you are a feminist, then it is contradictory

First published in 2003, Split starts at the time of a cholera outbreak and Nasrin’s work at the Suryakanta hospital in Mymensingh city. It chronicles ‘the ashes of an incredible dream—a life with R’, or the coming apart of her relationship with her first husband, the poet Rudra Shahidullah (who only goes by the initial ‘R’ in the book). They were married from 1982 to 1986; he died aged 34, in 1991. This memoir maps her growing resentment against her father and the devastation she feels at her sister Yasmin’s departure when she marries against the family’s wishes.

Moving beyond the poems, Nasrin says, “In Amar Meyebela (My Childhood Days), I wrote about how I’d been sexually harassed as a child. Sheikh Hasina banned my book in 1999. Most of my books were banned under the charge that it hurt religious feelings.” Her voice brimming with emotion, she says, “It is time women write their own stories. It is not for men to write about women’s pleasure and pain.”

Even in Split, Nasrin has encountered censorship. While she is grateful to her publishers for this English edition, she adds, “They initialised the names. Which I did not like. If you have a name, you can imagine, you can relate. They censored parts where I was critical of Islam. I think the time is not good, so they decided…”

In Split, she writes about the physical abuse she faces at the hands of her third husband MM, an alcoholic who punches her, chokes her and leaves her with a bleeding eye. She is unsparing in her criticism of those around her, be it her parents or lovers or friends. She writes, ‘I had seen Father behave similarly all his life—a tyrannical feudal lord at home and an oppressed peasant at the medical college.’

She chronicles the men she loved and those she slept with. She mentions taking Mr K into her bedroom, even as her family lived in the same house. ‘Not a single person ever said anything to me about it, especially Mother, and often after I came out of my room it was she who stayed hidden somewhere inside so as not to embarrass me.’

She writes about the seeds of Lajja that were planted during the Babri Masjid demolition. She calls it a ‘factual account of the state of the Hindu population in Bangladesh’. She tells her publisher, “It’s nothing great. It’s something I wrote in a lot of hurry. It’s about the persecution of Hindus last December.” She plots the controversies that dogged Lajja with the ‘scene in India being the complete reverse’. In India, left-liberals opposed the book. On the other side of the border, they supported it. Split ends with publishers clamouring for more of her books.

Reading Split, it is clear Nasrin is ballsy in her choices and trajectory. She is determined, courageous and unapologetic. But one will also tire of how quick she is to blame others for the fraying of relationships and her own misfortune. It is also clear she has had a very public life from her twenties, with her relationships being fodder for national papers, her writings leading to thousands baying for her blood and coming out in processions. Her personal security has been a matter of international dealings; prime ministers and presidents have opined about her. A memoir allows her to take control of the story and make it her own.

Much of Split also deals with Nasrin’s attempts at finding a house in Dhaka. As a single working woman in the early 90s, the search was notoriously difficult. When we meet, Nasrin is well ensconced in an apartment of sunlight and breeze. Vases packed with flowers grace every table top. The blooms are from her rooftop garden she reveals. She introduces her cat called Minu, a 15-year-old beauty who lies in repose on her own bed, in her own room.

What is her idea of home? “When I was 20-something and looking for a home in Dhaka, it was a struggle. I was divorced. My brother had a house, but I didn’t like to live with his family. Since then I’ve always lived alone. I used to call my country home. But it has been 24 years. Will I feel at home in my country, where many people will try to kill me? I moved to India because it looks like my country. Here I feel at home. After 24 years of exile, I could say, ‘home is people’. My home is actually people from whom I get love, respect, solidarity. I get that from secularists, feminists and humanists all over the world.”

Nasrin believes the present conversation against sexual harassment and women’s rights has come at a crucial time. As someone who has written about religion and women’s rights over the decades, she believes one cannot be religious and feminist. “I believe feminism is a radical notion that says women are human beings. Women should have equal rights. But if your religion says women are inferior beings and you say you are a feminist, then it is contradictory. I take religious texts literally, and I reject it. I do not try to take a seventh-century text and fool myself that whoever wrote it knew about women’s rights. They did not.”

Today, only a troglodyte would question women’s rights. But where Nasrin bells the cat is on questions of financial and sexual freedom. “When I talked about sexual freedom, I was discarded,” she says, “Without sexual freedom, women will never get equality, women are caged. It is a very, very important freedom.”