One India, One Man

Rediscovering Patel as unifier and assimilator 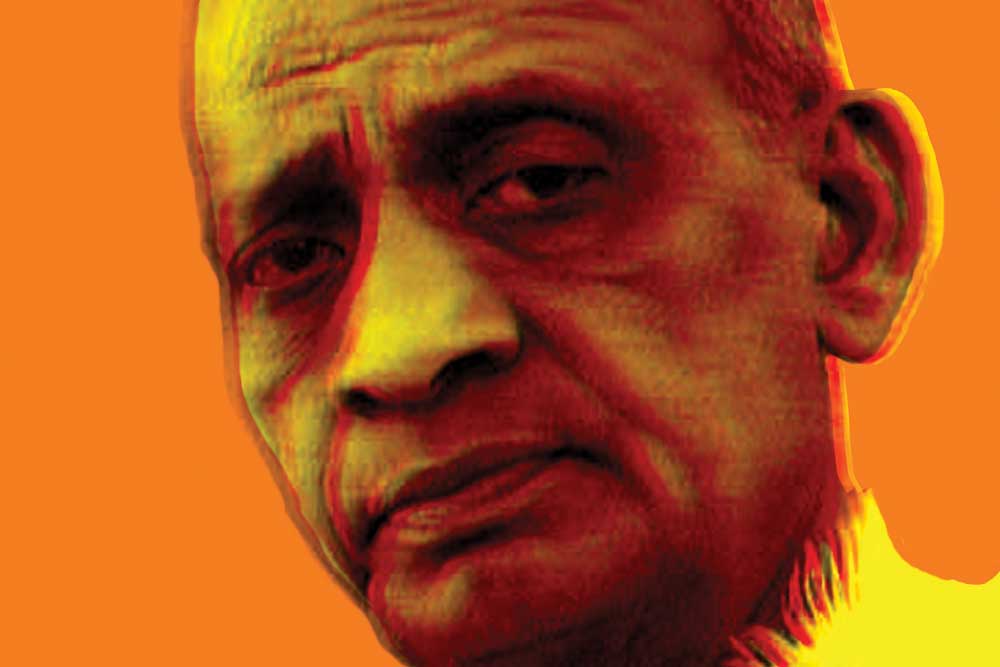 SOMEWHERE AT THE start of the book, author biographer Hindol Sengupta asks:

‘‘Gandhian’, ‘Nehruvian’, and even ‘Ambedkarite’ have become adjectives, but has anyone heard of Patelian?’ Why, he asks? Sengupta is not seeking real answers; else he would have examined the ‘thought quotient’ of each and done a comparative analysis of enduring and portable parts of their respective legacies. Rather, he asks this question rhetorically to suggest that Sardar Vallabhbhai Patel’s story of nation-building, his contribution, his stature, his sagacity and his legacy have not found the place they deserve in tributes to the national movement. Why we do not have a Patelian following, Sengupta laments, is because Patel’s legacy has been ‘systematically allowed to fade away.’ First it was the sleight of Gandhi and Nehru, and then the neglect of subsequent chroniclers and historians that made Patel land ‘clearly on the vanquished side.’

The angst running through the book seeks to not just record, exalt, reinstate Patel’s place in history, it also seeks scapegoats. So much so that in one place Sengupta describes Gandhi’s treatment of Patel (vis-a-vis Nehru) as akin to an ‘adopted son’. An adopted child as an analogy to explain biased treatment is a howler that shouldn’t have passed editorial muster. But distasteful metaphors aside, Sengupta’s otherwise rich account of Patel’s journey seems to seek resonance with the contemporary political tug of war, in which Patel’s eulogy is contingent on Nehru’s denigration. Sengupta even polemically asks: ‘Could it be that the tough love that Patel brought to the table is unpalatable to us today?’

That Patel was a great administrator, a hard negotiator, that he was instrumental in stitching together the entity of India, that he had the foresight, wisdom, skill and selflessness to work out the nuts and bolts of the territorial integrity of the country is a legacy that Sengupta resurrects with notable empathy and detail. If Gandhi and Nehru were the architects of the nation, Patel was the engineer who toiled hard, worked self-effacingly to negotiate the terms of our freedom, indeed our very nationhood. He was Gandhi’s ‘most loyal’, ‘most vocal’ supporter who worked with him through all his campaigns and against all his adversaries (Ambedkar, Bose, Jinnah, and the new Left within the Congress, for example). It started with the early years of Kheda and Rowlatt Satyagraha and the Non-Cooperation Movement. It developed further during the Bardoli Satyagraha where Patel developed information networks ‘that proved invaluable when he battled some of India’s most intractable problems— from Hyderabad to Kashmir.’ Such was Patel’s command over the national movement in 1928 that Gandhi said: “I am going to Bardoli not to take Vallabhbhai’s place but to serve under him.”

From as early as 1935, Patel begins talking to the princes with a nudge and a warning that change is inevitable and that democratic integration with the rest of India is their only way forward. Sengupta credits Patel with bringing together 500 princely states into the union of democratic India. Had it not been for Patel, India would not have remained integrated and united enough to survive. As Sengupta notes, ‘generations of Indians don’t quite grasp that there would barely be an India had it not been for the Sardar’. Patel was, as the title suggests, the man who saved India.

The title of the book begs a question: What did Patel save India from? Did Patel save India from territorial bifurcation and the partition? He did not. In 1946, when VP Menon (constitutional advisor to the Governor-General, Mountbatten, and secretary in the Ministry of States headed by Patel) outlined to Patel a scheme of transfer of power on the basis of partition and dominion status, Patel responded with approval. As Sengupta also notes, ‘Patel’s practical mind took a decision—if the choice was civil war or a divided country, where both sides would live and let live, then he preferred the latter.’

Patel was also not against the idea of letting go of Kashmir. V Shankar (ICS, Patel’s personal secretary for four years) recounts how Patel was content to leave the decision to its ruler. The truth is Patel, like all pragmatic thinkers and hard-nosed politicians, showed a tactical willingness to compromise. For Patel, Hyderabad was of greater interest to India than Kashmir. As Srinath Raghvan notes, ‘until late 1947, he was open to allowing Kashmir’s accession to Pakistan if the Pakistanis would tell the Nizam of Hyderabad to fall in line and join India. Patel even stated this publicly after the occupation of Junagadh on 11 November 1947: “Our reply was that one could agree on Kashmir if they could agree on Hyderabad.’

Another thorn of the Nehruvian inheritance is Article 370 that accords special status to Jammu & Kashmir. Did Patel save us from that? The actual negotiations were carried out over several months between NG Ayyangar (cabinet minister and former Dewan of Kashmir) and Sheikh Abdullah and his senior colleagues. In Nehru’s absence (he was in the US addressing members of the US Congress), it was Patel who navigated most of the amendments sought by Sheikh and the Congress.

Perhaps the biggest achievement credited to Patel was achieving the mammoth task of princely states’ integration. It has even earned him the title of India’s Bismarck. Had it not been for Patel’s deft negotiations, India may well have ended up being ‘a nasty warring balkanized mess of fragmented states’ in Sengupta’s words. Polemical assertions gloss over what is buried later in the pages of chapter eleven and in accounts of V Shankar and VP Menon. Sengupta notes, a little too matter-of-factly though, the role played by Mountbatten in the integration of princely states, many of which were threatening to become violent. Sengupta notes, ‘Patel, Menon and Mountbatten…. brought the princes on board to the union of India one by one.’ Mountbatten’s role in this process was actually critical. It was Mountabatten who foiled Jinnah’s plans to egg on princely states to declare themselves independent and Balkanise India. Mountbatten used every weapon in his armoury of persuasion to negotiate the proposed instrument of accession. So much so that a brilliant essay by historian AG Noorani credits the crucial phase of the integration of the princely states to mainly Lord Mountbatten, and his constitutional advisor, VP Menon. ‘Patel played a supportive and ancillary role. The task was outsourced by him with the Cabinet’s full authorisation to Mountbatten.’

The examples above are not instances of Patel’s failure to ‘save’, but to free him of the burden and mantle of ‘saving’ and ‘saviour-hood’. More than anyone else, Patel would have acknowledged that something as large as nation-building requires team effort, needs space for differing sensibilities and room for give and take, conflict and compromises. Sengupta’s biography plays up differences of the time between Patel and Nehru—on the choice of the first Indian President, on China-Tibet, on Kashmir, on party president-ships to name a few—and leads you to take sides.

Often, the side to be taken draws upon counterfactuals. What if Patel had been Prime Minister? What if Gandhi had been fairer to Patel and made him the party president more often than the once in 1931? What if Nehru had heeded Patel on the China-Tibet issue? What if India did not adopt the brand of socialism that Nehru favoured? What if Patel did not achieve the stupendous feat of integrating 500 princely states?

Counter-factualism is, as British historian E P Thompson wrote, ‘Geschichtwissenschlopff, unhistorical shit.’ It doesn’t require evidence. Also, it ignores an infinite number of chances that might have deflected the predicted course of events. Counterfactuals do not free history from its straightjacket, albeit they imprison the past in a tighter web of suspicion, regrets and accusations. If Patel gave India its territorial integrity, Nehru gave us the identity, of a modern, democratic, secular republic. If Patel worked the mechanics, Gandhi gave this nation a vision of empathy that still guides us. Anyone who nudges you to choose between them is serving a divisive agenda. Patel, the unifier and assimilator, would be the first to denounce this.